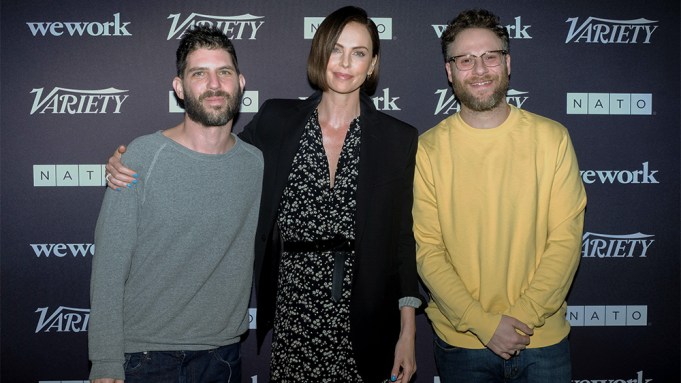 Seth Rogen is a big fan of “Roma,” the multi-hyphenate star admitted on a muggy Sunday morning at SXSW, but he doesn’t know how to make movies or do comedy for any other format than a packed movie theater.

The theatrical versus streaming debate was top of mind for Rogen, his “Long Shot” leading lady Charlize Theron and their director Jonathan Levine, who sat for Variety and the National Association of Theater Owners’ filmmakers panel at downtown Austin’s WeWork space.

“Personally, with our comedies, I think a theater is the best place to see them,” Rogen said, recalling formative experiences seeing “There’s Something About Mary” and the “South Park” movie at his local cineplex.

“There is an uproarious communal experience. You all feel like you’re partaking in something together. Last night was a good example of how powerful comedy can be in theaters,” said Rogen.

The star referred to the SXSW premiere of “Long Shot,” which saw Austin’s Paramount Theater get rowdy thanks to a live performance from Boyz II Men, who have a cameo in the film. Theron and her male counterparts danced freely to throwback jams on stage as a lubricated crowed went nuts at the sight.

“As someone who never gets nominated for any awards anyway, I don’t give a f— how to deal with that,” Rogen joked of the debate, which has heated up considerably since Steven Spielberg indicated he would ask the film Academy to consider banning streaming giants like Netflix from campaigning for Oscars (they won three this year for Alfonso Curaon’s “Roma”).

Moderator and Variety New York bureau chief Ramin Setoodeh asked Theron her opinion on the matter as a producer, as the Academy Award winner has been as prolific behind the camera as she has in front (her producer credits include “Long Shot,” “Tully,” and “Atomic Blonde”).

“I think it’s a good thing we have all different formats … it’s not 20 years ago and there’s only one way you can do it. That freedom has opened up for more interesting filmmakers, and for people to actually see their movies,” said Theron.

She still believes, however, “there is a magical thing that happens then you’re in a room full of strangers, and you can’t recreate that in your home, or an airplane, or on the subway.”

Mid-budget, adult-skewing comedies like “Long Shot” are an increasingly endangered species at the major studios, but Rogen said his track record has been consistent enough that the majors keep inviting him back to make content for theaters.

The conversation wasn’t all business. In “Long Shot,” Theron plays a U.S. Secretary of State whose journalist old flame (Rogen) tails her for a story. When their chemistry reignites, the pair set off on a wild night abroad and Theron winds up having to negotiate a crisis while high on molly (MDMA).

“I’ve heard that it feels good to touch things,” Theron said of the experience with a laugh, “so I just kind of went from there.”

Rogen wanted to weigh in, but spotted a child in the crowd, saying, “That baby really threw me, I’ll be honest. That sent me crashing back to earth.”