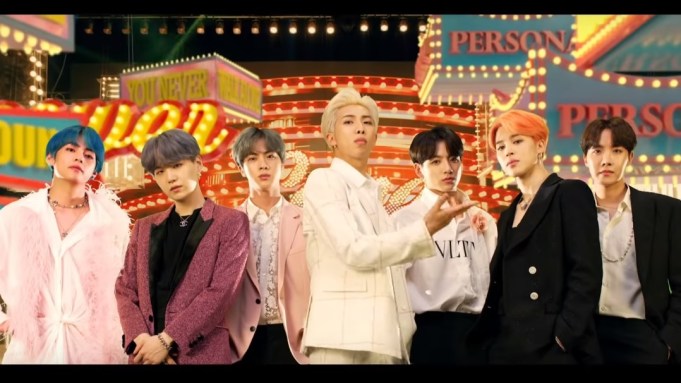 UPDATED: K-pop superstars BTS, the most popular boy band in world, have smashed YouTube’s record for the most views accrued in the first 24 hours of release with their single “Boy With Luv,” featuring American pop star Halsey.

As of 5 a.m. ET Saturday, “Boy With Luv” had racked up just over 78 million views, according to YouTube’s public views counter. On April 15, YouTube revised the video’s official stat to 74.6 million views in the first 24 hours, to adjust for overcounting by its real-time system. In any case, it demolished the previous record, set just a week ago by K-pop girl group Blackpink’s “Kill This Love,” which had 56.7 million views in its first 24 hours to top Ariana Grande’s “thank u, next.”

“Boy With Luv” also has become the fastest video reach 100 million views (in less than two days). In addition, BTS’s “Boy With Luv” video on YouTube drew a staggering 2 million comments in the first 24 hours (which grew to over 2.7 million by Monday, April 15).

BTS is the musical guest on April 13 episode of NBC’s “Saturday Night Live,” hosted by Emma Stone, where the group is slated to perform “Boy With Luv.”

As of early Saturday, “Boy With Luv” had been the No. 2 trending video worldwide on YouTube, behind the first trailer for Disney/Lucasfilm’s “Star Wars: Rise of Skywalker” (Episode IX). Note that YouTube ranks trending videos based on multiple factors, including views and user engagements.

“Boy With Luv” is a reference to the group’s 2014 song “Boy in Luv.” According to Variety‘s review of BTS’s new album “Map of the Soul: Persona,” released Friday, Halsey’s vocals capture “the giddiness of being in love, while the lyrics address the relationship the group has with its ARMY: ‘I’m flying high in the sky with the two wings you gave me,’ with the wings referencing the title of their second album.”

Meanwhile, in the U.S., all seven songs from BTS’s “Map of the Soul: Persona,” released Friday, are on Apple’s iTunes top 10 music chart. On iTunes, “Boy With Luv” stands at No. 2 behind the remix of Lil Nas X’s “Old Town Road” country-hip-hop track featuring Billy Ray Cyrus.

BTS is an abbreviation of “Bangtan Sonyeondan” (방탄소년단), which literally translates to “bulletproof boy scouts” although two years ago they announced an extension of their brand in English to “Beyond the Scene.” The seven-member group — comprising members RM, Jin, Suga, J-Hope, Jimin, V, and Jungkook — was formed by Big Hit Entertainment in 2013. This past February, BTS became the first K-pop group to present an award at the Grammys, where they bestowed the trophy for best R&B album to H.E.R. for her self-titled album.

Here’s an updated Top 10 YouTube videos ranked by views in the first 24 hours: