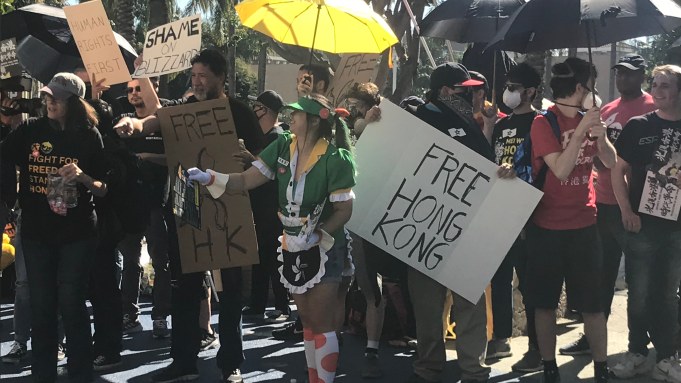 UPDATED: Dozens of demonstrators arrived outside of BlizzCon, Activision Blizzard’s annual convention to promote its current and upcoming releases, on Friday to protest the company’s decision to take punitive action against a professional “Hearthstone” player who made a statement of support for Hong Kong during a livestream.

The protesters gathered outside of the Anaheim Convention Center on Friday afternoon, the first day of the two-day event. Many held up signs that read messages including “Free Hong Kong,” “Shame on Blizzard” and “Blizzard = China’s bitch.” Several attendees were also dressed as Winnie the Pooh, which has been banned in China over jokes that the portly character resembles President Xi Jinping. One protester wore a Xi mask in addition to his Pooh costume, asking passersby, “Would you like to commit some genocide?” while holding out dollar bills.

Protesters started early in the morning by handing out “Mei with Hong Kong” T-shirts near the entrance of BlizzCon before the protest’s official noon start-time. Mei, an “Overwatch” hero, has become a symbol of the pro-democracy movement in Hong Kong. Around noon, chants of slogans like “Oppression is wrong, free Hong Kong,” “people over profit” and “gamers unite for human rights” broke out.

Nonprofit advocacy group Fight for the Future began organizing the protest last month, when Chung “Blitzchung” Ng Wai’s punishment was first announced, calling it part of its Gamers for Freedom campaign. Dayton Young, product director for Fight for the Future and organizer for Gamers for Freedom, told Variety that they wanted to “let companies know that we won’t be silenced.” Young, a gamer himself, said Blizzard has not been in touch with the organizers of the campaign.

“We encourage them to open up a dialogue with not only us, but the entire gaming community, because that’s one of the things that’s very upsetting about this,” he said. “They’re making rules that impact our safety, our health, our privacy, and they need to engage in a dialogue with us in order to make those decisions properly.”

In response to the protest, Blizzard said in a statement, “We understand this is an important issue, and it’s one many community members and employees feel strongly about. We deeply value personal expression, and support everyone’s rights to make their voices heard peacefully and lawfully.”

It also addressed the protests from inside the convention, with Blizzard president J. Allen Brack offering an apology for the way the company handled the controversy.

“We moved too quickly in our decision and then to make matters worse, we were too slow to talk with all of you,” Brack said at the event. “I am sorry and I accept accountability.”

Young said Fight for the Future had been in touch with the Anaheim Police Department to make sure “we’re doing everything safely and legally,” and Mike Lyster, a spokesperson for the City of Anaheim who was at the protest, confirmed that they’d been in “regular contact” with organizers for the past few weeks. He said the size of the protest was “moderate” compared to other demonstrations that have taken place outside the convention center, and added that “everything has gone very well.”

“They just want to be heard on an issue and that’s certainly what we’ve seen here today,” he said. “So obviously [the protest is] something that we have to think about, but not overly concerned about it.”

Last month, Blitzchung, a professional “Hearthstone” player who lives in Hong Kong, shouted “Liberate Hong Kong, revolution of our times” during a live-streamed post-match interview. In response, Activision Blizzard banned him from “Hearthstone” esports for a year and rescinded thousands of dollars in prize winnings from his Asia-Pacific Grandmasters tournament win.

At the time, Blizzard cited its guideline that prohibits players from “engaging in any act that, in Blizzard’s sole discretion, brings you into public disrepute, offends a portion or group of the public, or otherwise damages Blizzard’s image.”

“While we stand by one’s right to express individual thoughts and opinions, players and other participants that elect to participate in our esports competitions must abide by the official competition rules,” Blizzard said in a statement.

The backlash was swift, and the video game publisher eventually softened Blitzchung’s punishment, reinstating his winnings and reducing his ban to six months. Still, it maintained that his behavior was inappropriate. “There is a consequence for taking the conversation away from the purpose of the event and disrupting or derailing the broadcast,” Brack said in a statement.

Activision Blizzard’s actions even attracted the attention of top lawmakers. A group of politicians that included Sens. Ron Wyden (D-OR) and Marco Rubio (R-FL) and Rep. Alexandria Ocasio-Cortez issued a letter to Blizzard urging the company to reverse its decision against Blitzchung.

Fight for the Future also organized an online protest that took place on Tuesday ahead of the event, asking activists and gamers to utilize social media to “demand game developers and BlizzCon sponsors take a stand and state that they will not participate in authoritarian censorship.”

The protests come after a tumultuous year for Blizzard. In February, it laid off more than 800 employees in a massive effort to cut costs while focusing on established brands like “Call of Duty,” “Overwatch,” “Warcraft” and “Diablo.”

The company is likely looking toward BlizzCon to turn things around. It announced “Overwatch 2,” the sequel to its commercial and critical 2016 hit, as well as “Diablo IV” at the event.