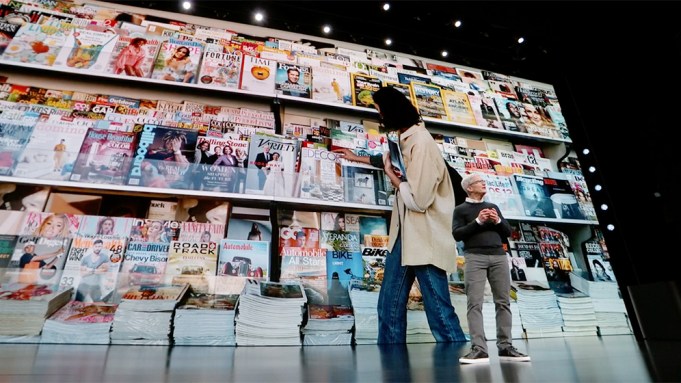 Apple unveiled a news subscription service called Apple News+ at its services event in Cupertino, Calif. Monday. The $9.99 service gives paying subscribers access to over 300 magazines as well as select newspapers and premium digital news services. “We believe in the power of journalism and the impact it will have on your lives,” said Apple CEO Tim Cook.

Some of the magazines part of the service are GQ, Esquire, Popular Science, the New Yorker, Sports Illustrated, Fortune, New York Magazine and Vogue, as well as Variety and Rolling Stone (Rolling Stone is owned by PMC, the parent company of Variety). Newspapers included in the package are the Los Angeles Times and the Wall Street Journal. Digital publications include theSkimm, Techcrunch and the Highlight by Vox.

The service is directly integrated into the existing Apple News app, which Cook described as the “number one news app,” with over 5 billion articles read each month. “We are bringing magazines to Apple News,” Cook said. “Magazines are iconic, and a part of our culture.”

The service will launch in the U.S. and Canada effective immediately via an update the Apple News app. The company plans to launch it in Australia and the U.K. later this year, and in other European countries in 2021. Subscribers will be able to share their subscriptions via family sharing without any additional charges.

Apple executives stressed on Monday that the new service would preserve readers’ privacy. To do that, the app is downloading groups of articles from Apple’s servers, and then using on-device algorithms to suggest select articles to subscribers. Apple execs also promised that it wouldn’t let advertisers track readers.

Apple News+ will effectively replace Texture, a magazine subscription service that Apple acquired a year ago. Texture offered subscribers digital access to more than 200 magazines for a flat fee of $9.99 per month.

The service allowed users to read magazines “from cover to cover,” effectively replicating the layout of the print magazine on digital devices. Unlike the newly-launched service, Texture did not offer access to any newspapers.

The launch of the subscription news service is not entirely surprising: Bloomberg first reported about Apple’s plans for such a service late last year. More recently, it became clear that some news publishers were not ready to launch the service. Just last week, New York Times CEO Mark Thompson told Reuters that he was worried about paid platforms becoming so powerful that they could eventually replace traditional publishers, something he likened to the ascent of Netflix.

Some of the details of Apple’s new service are still unknown, including the level of participation of some of the publishers. A weekend Wall Street Journal report suggested that the paper may contribute politics and general news coverage, but keep some of its business stories behind its own paywall.