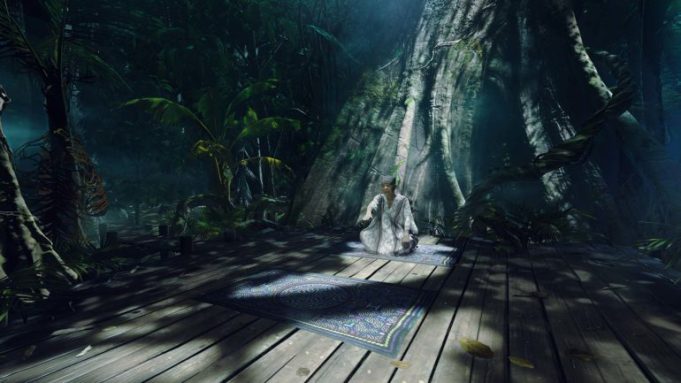 Jan Kounen, the Netherlands-born French film filmmaker whose best-known credits are “Dobermann‎” and “Blueberry,” has delivered his most personal work so far with “Ayahuasca,” a virtual reality experience exploring shamanic medicine from the Peruvian jungle.

Produced by France’s leading VR outfit Altas V (“Gloomy Eyes,” “Spheres”), Luxembourg’s A_Bahn and Small studios, “Ayahuasca” was created by Kounen based on his multiple trips to the Peruvian Amazon where he participated in the Ayahuasca rituals. Guided by a Shaman, the 11-minute immersive journey recreates the psychedelic and spiritual effects of listening to meditative chanting and drinking a plant-based tea known as Ayahuasca which is meant to cleanse the mind and body.

“Ayahuasca” world premiered at the Tribeca Film Festival and went on to play at festivals in Geneva, Mexico and Arles. It has just rolled onto Steam, the video game platform, the online store Vive HTC and Amaze. The experience also bowed at the Diversion location-based and cultural institutions in multiple locations, as well as the Amsterdam Eye Museum.

“Only VR can give the possibility to share a mind-altering, therapeutical experience like the Ayahuasca medicine because we’re using immersive technology, as well as sensory techniques to bring you in, in a way that no film can do,” said Kounen. He said stepping into VR after having spent his career making movies wasn’t an issue because “they are two different things, like literature and theater.” “When you’re making VR content, the core is the experience in itself, not the narration and backdrop which are the basis in filmmaking,” said Kounen.

The director said “VR, like AR (augmented reality) triggers our senses, brings out deeper issues and makes us perceive reality differently, as does science fiction which often makes us reflect on our world.”

Kounen said he was fascinated by how fast the VR and AR technologies are evolving. “We started with two labs doing back and white VR and now we have labs doing colors, sounds, advanced technologies allowing you to go so much further and explore feelings and our relation to space and reality,” said Kounen.

AtlasV, meanwhile, is also getting ready for the release of Fernando Maldonado and Jorge Tereso’s animated VR “Gloomy Eyes,” voiced by Colin Farrell.