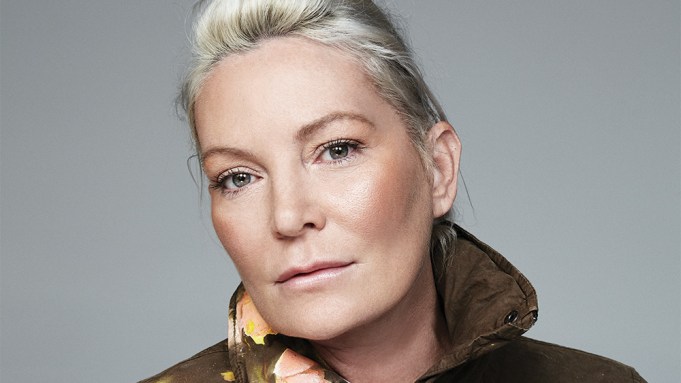 When Ariadne Getty was growing up in Italy, her family — the scion of which was famed oil tycoon J. Paul Getty — owned a home in Orgia, a tiny Tuscan village in the province of Siena.

“At the time there were probably 60 residents, and now it’s down to about 30,” recalls Getty, who, at the age of about four or five, would spend her days marveling at the local village women, “their backs curved” as they carried heavy planks of wood and transported large jugs of drinking water while their husbands were off working at the local quarries.

Getty’s mother, Gail, owned a fashion boutique in Rome, and the production hub for its inventory was located in Orgia. Gail would hire the local women to knit clothes and design patterns for the shop’s winter and summer collections, but often “they would take on extra jobs as well,” says Getty.

“I would always go and help them,” she continues. “One summer they were making Dr. Scholl’s [sandals]. We would have to nail in the part of the sandal where the leather strap hits the front of the foot. And what I realized was that these women didn’t have any help. There wasn’t a place where they could go and say, ‘I can’t make my rent this month, and I’m doing all this heavy labor.’ They just had to keep on taking jobs. They had to take on that responsibility completely by themselves. And I think that’s always stuck with me, that sense of loneliness those women must have felt.”

In later years, Getty, who is being honored as Variety’s 2019 Philanthropist of the Year, would remember those Italian women and their hardscrabble existence, the way they doggedly persevered without complaint. It was, in fact, those women, along with Getty’s two children, Natalia, known as “Nats,” and August, who would come to serve as inspiration for Getty’s myriad charitable endeavors and her impassioned drive to help others.

Getty, who now lives in Los Angeles, considers herself “a lifelong philanthropist,” eschewing any flashy public attention her name might inspire in favor of devotedly giving back to the community. In 2004 she established her eponymous foundation. Since then the Ariadne Getty Foundation, of which she is the president and executive director, has partnered with many organizations, including GLAAD and the Los Angeles LGBT Center, to bring about positive systemic change within the LGBTQ community.

Realizing the extent to which so many at-risk youth and elderly were struggling, compounded by the realization that both August and Nats, artists and fashion designers with their own respective clothing lines, are gay, “really shook [Getty] to the core.”

To that end, in January 2018, Getty attended the World Economic Forum in Davos, Switzerland, where she pledged a gift of $15 million to GLAAD.

“We need to engage the corporate world,” says Getty. “We need the big hitters. We need the powerful companies to be able to say we are pro-LGBT.”

Her donation is being used to fund the GLAAD Media Institute, which trains individuals to use media, including social media, in ways that can help combat homophobia and advocate for LGBTQ equality.

“Ari is a visionary working for a world where LGBTQ acceptance is the norm,” says Sarah Kate Ellis, GLAAD president and CEO. “Her approach to philanthropy is unique and hands-on, as evidenced by her work to bring LGBTQ issues to the world stage at the World Economic Forum in Davos and demand action from the global leaders in attendance. She leads the Ariadne Getty Foundation with humility, heart, activism and an astute focus on impact. These efforts have enabled GLAAD to bring new culture-changing stories to countless schools, churches, and water coolers around the globe.”

Given the fractured state of American politics in the wake of Trump’s presidency and the harrowing uptick in hate crimes, many of which target the LGBTQ community, arming people with facts and education is the most practical way to combat bigotry and violence, she says.

“We need allies,” she says. “The Media Institute goes from city to city — I think we’re up to 20,000 people that we’ve trained in media speaking — so that they can go and represent the LGBTQ world and address what needs to be addressed, what [LGBTQ-related] bills are looking to be passed, what’s going on in the world that affects the community. It’s all about educating and preparing individuals to be able to stand up and have a voice that is informed and that will receive results. You’re taking the emotion out and replacing it with information and you’ll get much further that way. The resistance you’ll meet will be much less because you’re coming from an informed and educated point of view. It’s about accelerating acceptance.”

Getty also donated $2 million for the Ariadne Getty Foundation Youth Academy, which opened in April. Located on the newly opened Anita May Rosenstein Campus of the Los Angeles LGBT Center, which celebrated its 50th anniversary this year, the Youth Academy provides GED prep classes, a computer lab, one-on-one tutoring and financial assistance for college fees, books and transportation. Additionally, Getty donated $2.5 million for the Ariadne Getty Foundation Senior Housing, which is slated to open in 2020 and will provide 99 affordable housing units for senior citizens.

“I remember when I went to my first fundraiser for the Los Angeles LGBT Center at Roland Emmerich’s house, I started to understand how desperately we needed to start making changes and that it’s not going to happen just by caring about these young people or whomever is at risk,” says Getty. “It’s really about getting your hands in there because there are so many ways to help. People always think that it has to be a financial donation, but it’s not about giving money. So much of it, for me, I look at people who volunteer with so much respect because they’re giving of their own time.”

That night at Emmerich’s home was also the first time Getty heard Los Angeles LGBT Center CEO Lorri L. Jean speak. Considering Jean “a force of nature,” she was inspired to dedicate herself to advocating on behalf of the LGBTQ community.

“Ariadne’s unwavering support during the past six years has enabled the Los Angeles LGBT Center to do so much more to help the most vulnerable in our community — especially the establishment of the Ariadne Getty Foundation Youth Academy,” says Jean. “This Academy is literally changing the lives of hundreds of youth experiencing homelessness by providing them with the knowledge and skills necessary to complete their education, secure employment, and thrive. And next year, we will open the 99-unit Ariadne Getty Foundation Senior Housing so that our seniors may spend their golden years in safe, affordable housing and getting the services they need to be happy and healthy. Ari is a visionary with a heart of gold.”

But Getty is also cognizant of the ways in which she is constantly learning about the needs of the LGBTQ community, including her children, with whom Getty is extremely close, so much so that she is the CEO of their design labels, August Getty Atelier and Nats’ Strike Oil, both headquartered in Los Angeles. She is still navigating how to be the best advocate for August and Nats, who earlier this month married YouTube star Gigi Gorgeous.

“The more I get asked how Nats and August came out to me, aside of, you know, [talking about] being the accepting mother, I’ve begun thinking to myself, what could I have changed?” says Getty. “Sometimes I look back and wonder, ‘maybe I should have said this, or maybe I should have said that.’ At the time, when they came out to me, it was just important for me to be there for that moment. I’ve always been there for them without any judgment, coming from a place of love.”

The LGBTQ community is Getty’s root cause, but her underlying mission extends beyond that. She strives to help all people courageously struggling to become their most authentic self. Getty says she has seen way too many men and women live their entire lives in the closet. She wants to change this.

“These are the walls that I want to break down,” says Getty. “I do not want a single person in their life to have to live into their 70s and have a secret. It’s the craziest thing. Why do you have to keep anything secret?”

Getty is candid about her privilege, and how her position as heir to a petroleum fortune has enabled her to successfully champion matters affecting the LGBTQ community. She’s not so much proud of her accomplishments, she says, as grateful for the opportunities she’s been given “to make an impact.”

“Maybe my father and my grandfather are looking down and they’re proud, because what I do know is that I didn’t make any of this money. I’ll never pretend that I made any of it,” she says. “But I’m not going to live in a fancy world, I’m not here to spend it all on fancy lunches. My role is to create, to effect change. I’m a steward. My focus is on philanthropy, on creating lives for my children that will be long-standing and permanent. Pride, I don’t know. But I love the fact that I am making a change. I’ll leave the proud part to my angel grandfather and angel father.”