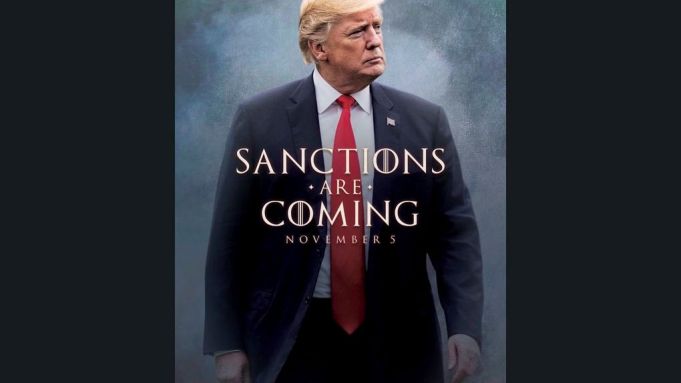 Everyone wants a piece of the “Game of Thrones” lemon cake. From Bud Light to Red Bull the world of Westeros is open to a lot of brand partnerships, unless you’re using that iconic typeface to push a political agenda.

In November of 2018 President Donald Trump unveiled a “Thrones” inspired poster with the words “Sanctions Are Coming” printed across a portrait of the 45th president.

“Our attitude was we don’t really like our IP to be used for political purposes,” said HBO’s EVP and head of marketing Chris Spadaccini.

“It’s is such a cultural phenomenon that brands are going to be out there culture jacking ‘Game of Thrones,’” Spadaccini explained at Variety’s Entertainment Marketing Summit, presented by Deloitte. Listing off the various properties who have appeared in their social feed from Charmin, Wendy’s to Hulu but the marketing exec seemed a bit shocked that, “Trump got in on the action.”

“We didn’t want to pick a fight with the president,” Spadaccini said. “I gave my social team a lot credit because they had a very snarky little subtweet that said, ‘How do you say trademark infringement in Dothraki?’ And that got a lot of press coverage.”

How do you say trademark misuse in Dothraki?

Spadaccini’s team may have played coy, but the “Game of Thrones” cast certainly did not.

Guess they can’t all be white walker whiskey.

The eighth and final season of “Game of Thrones” premieres April 14 on HBO.