In Los Angeles, Rock and Roll Fights to Save the Sunset Strip

On a recent Saturday evening on Sunset Boulevard, just beyond the nightly caravan of European sports cars and open-air tour buses that have seen better days, the famous Tower Records building was once again bathed in the familiar red and yellow paint job of the iconic music store that once occupied its stone-brick walls.

Though the store had shuttered in 2006, it had been revived for the weekend, at least on the outside. Only this time, the doors of the building weren’t welcoming shoppers, but rather holding up billboards for the movie, “Yesterday,” the new Beatles-inspired flick whose promotional campaign was inspired by the color of the Fab Four’s “Yellow Submarine.”

Just down the block, a group of city advocates were throwing an event to kick off the “Summer on Sunset,” a new initiative that seeks to bring back some of the lustre to the Sunset Strip. If the Tower Records store, a former jewel in the city and must-visit shopping destination, was now reduced to a pricey placard, what fate awaited the rest of the Boulevard’s residents?

Dubbed the “Summer on Sunset” concert, the private, invite-only event was a joint effort between the West Hollywood Travel and Tourism Board and the Sunset Strip Business Improvement District, who used the concert to kick off a series of new initiatives to bring business and attention back to the once-thriving neighborhood.

As guests like Kendra Wilkinson and Victoria’s Secret model, Taylor Hill, munched on spicy crispy tuna rolls and mini sliders from Sunset Strip staples like Katana and BOA Steakhouse, musicians Dave Navarro, Juliette Lewis and the Sex Pistols’ Steve Jones took to the stage to perform for the crowd, trading off on a mix of their own songs and popular rock covers. Toward the end of the night, Courtney Love made a surprise appearance, and took the mic to perform a duet of “Celebrity Skin” with Navarro, followed by a rousing rendition of “Anarchy in the UK,” with Jones on backing guitar. With amps blaring, spotlights on high and hundreds of partygoers posing for photos, it was, at least for a couple hours, a throwback to the glory days of the Strip.

In Hans Fjellestad’s 2012 documentary, “Sunset Strip” (stream here), the late producer and The Runaways manager Kim Fowley, calls Sunset Boulevard, “a civilization for the broken-hearted, the mistreated, the overlooked, the under-loved, the under-paid and the doomed.”

But for a time, Sunset Boulevard was also a place of intense glamour and style. As the well-to-do set settled Beverly Hills, the Sunset Strip — which actually begins at the edge of Beverly Hills — became a place where everything from the outfits, to the people, to the music, was bigger, bolder and louder.

According to the West Hollywood Travel and Tourism Board, the Strip’s origins really got its start in 1930s mob culture and Hollywood’s golden age, as a place where darlings and delinquents would mingle. But it really became a hotbed for the music scene during the rock and roll movement of the late 1960s, later becoming an illicit playground for the big “hair metal” scene of the late 80s. Flanked by venues like The Viper Room, Whisky a Go Go and The Roxy, Sunset Boulevard became a place where musicians could play and party, without the pretense. Artists who inhabited the Strip included Led Zeppelin, The Doors, Elton John, Janis Joplin, Guns ‘N Roses, Bob Dylan, and Jimi Hendrix, who would all play a show one night, and then come back to drink the next.

Indeed, music may have brought the masses to Sunset, but partying kept them coming back. “Did you know that’s where this idea of ‘Go Go Girls’ started?” a TMZ tour guide told me one summer when I was visiting the Strip. “Before girls were dancing on tables at clubs, they were dancing on the bar at The Whisky.”

But like everything in Hollywood, the headlines of one day turn into postscripts the next. The Viper Room never quite recovered after the actor River Phoenix overdosed on the sidewalk outside the club in 1993, while local dive bars and paraphernalia shops soon gave way to snazzy lounges and guestlist-only clubs. When the Tower Records store finally shut its doors in 2006 (the parent company had filed for bankruptcy two years earlier), it was seemingly the last vestige of a bygone era. Still, not everyone is convinced that the sun has set on the Strip just yet.

“The neighborhood did have a moment years ago where it was the place to be for people out of the area to cruise, but that’s gone now,” says Lee Maen, vice-chairman of the Sunset Strip BID (Business Improvement District) and co-founder of Innovative Dining Group, who opened his popular restaurant BOA Steakhouse on the street in 2009, followed by three more restaurants over the past ten years. “Still,” he adds, “I don’t believe that Sunset has lost its luster.”

According to Tom Kiely, resident and CEO of the West Hollywood Travel and Tourism Board, a number of different factors led to the Strip’s decline in popularity over the last few years. “Digital entertainment consumption, an evolving music genre and the growth in younger audiences has accelerated the need to expand beyond the rock era of the Sunset Strip and put more of a focus on all sectors,” he says. “As with anything new, it takes a period of test and adjustments to restore the vibe and energy that once permeated throughout the Strip.”

The plan to revitalize Sunset starts with the “Summer on Sunset” event series, which Kiely says will promote new businesses in the neighborhood, welcome new shows at the venues, showcase “cutting edge culinary trends,” pop-up lifestyle experiences, and new events. “The Sunset Strip has always been a hub of creativity – free-flowing with music, dining, dancing and shopping,” he says. “As the Strip continues to blaze its own path as a world-famous cultural landmark, setting trends in music, hospitality, and dining, we invite locals (and visitors) from near and far, and fans of all genres to fall in love with the Strip’s rebellious, forward-thinking spirit.”

Maen says he wants to bring back a neighborhood feel to Sunset, which in recent years has been overtaken by pricey hotels and velvet rope-lined clubs that seem reserved for the super elite.

“We want Sunset to be a place for our beloved locals, and be a place where you say, ‘I’m going to Sunset,’ versus just going to one restaurant or bar,” Maen says. “We truly believe that when you make it a local spot, others will want to be there, whether it’s from other parts of Southern California or tourists from around the world.”

Kiely says it’s also time to look beyond music, to make the Sunset Strip, “a haven for foodies, fitness junkies, revelers, activists, the LGBTQ community and creatives of all kinds.”

It’s something that Lewis, who performed covers of David Bowie’s “Suffragette City” and Van Halen’s “Ain’t Talkin’ Bout Love” at the kickoff event, agrees with as well. “Sunset will always have an energy from the past to the present, where a bunch of different cultures of fun converge,” she says. “You can get your dance on, see great shows, or just let yourself get lost.” 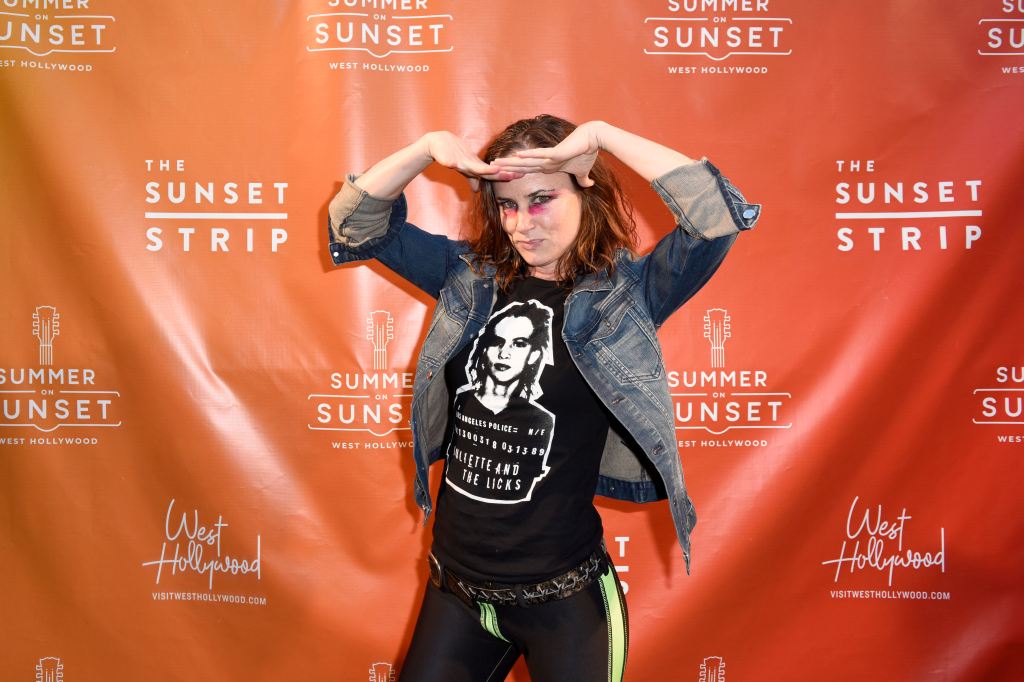 Events planned as part of the “Summer on Sunset” series include live concerts at the Sunset Marquis, karaoke nights at Blind Dragon, and Whisky a Go Go’s “Ultimate Jam Night,” with amateur musicians taking the stage every Tuesday. It all wraps up on September 1 at the Rainbow Bar and Grill, with a star-studded, end of summer “Backyard Bash,” featuring Guns ‘N Roses’ Steven Adler, Hurricane, Pretty Boy Floyd, Motley Inc., Electric Hound, Angeles and Metal Knights.

“The Sunset Strip has been the main artery between downtown LA and the westside of Los Angeles for over 100 years,” says the singer and actor, Donovan Leitch, whose parents met on the strip and who says he’s played “at least 100 shows” in the neighborhood. “It’s attracted rocks stars, serial killers, tycoons, and junkies, and thus birthed an iconic boulevard. I believe the energy, past lives and spirits of the Sunset Strip are alive and well.”

Lewis says it’s even more simple than that: “It’s always fun to land in a rock club and get born again,” she says. “There’s an energy here that just won’t quit.”