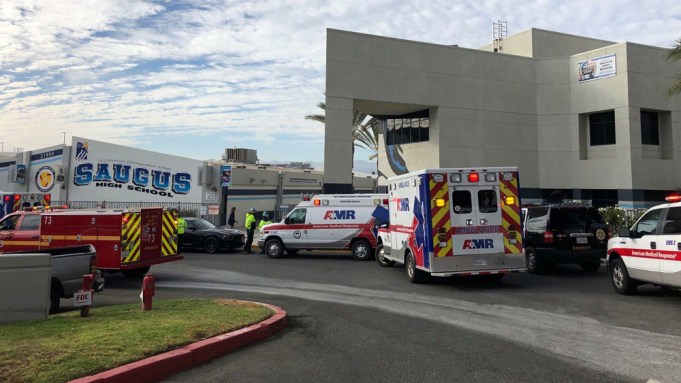 UPDATE: Two teenagers died and three others were injured after a shooter opened fire on Thursday morning at Saugus High School in Santa Clarita, about 40 miles north of Los Angeles.

The shooter, a 16-year-old student, pulled a handgun from his backpack and opened fire on five other students on the school’s quad around 7:30 a.m., said Sheriff’s Capt. Kent Wegener. The suspect then shot himself in the head. He died on Friday, according to the Los Angeles County Sheriffs Department.

Multiple news outlets, including CBS News and the Los Angeles Times, identified the shooter as Nathaniel Berhow. Authorities said that Thursday is his 16th birthday. According to an online obituary, Berhow’s father died two years ago.

Deputies were able to confirm the details of the shooting from witness accounts and the school’s surveillance video.

Villaneuva said the gun was a .45-caliber semi-automatic pistol. Tim Murakami, the undersheriff, posted that the department is investigating rumors that the suspect made threats on social media. The motive for the shooting was unclear.

Deputies searched the suspect’s home and locked down the street that he lived on, in the 22900 block of Sycamore Creek Drive.

Dispatchers received several 911 calls around 7:38 a.m. Schools in the area were put on lockdown as deputies scoured the neighborhood. People who live in the area were advised to lock their doors and stay inside.

Parents were reunited with their children at Central Park, on Bouquet Canyon Road. Deputies interviewed each student before they are released to their parents.