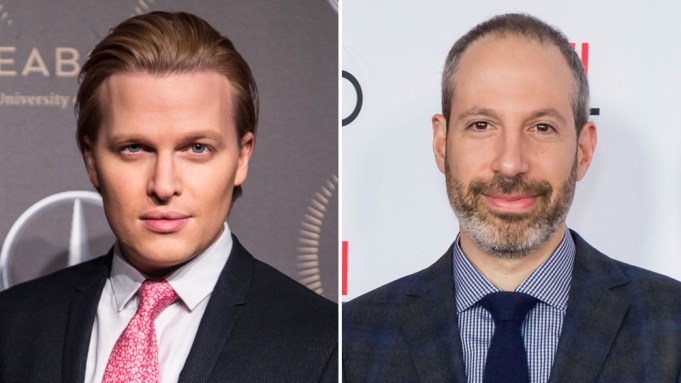 NBC News and its leadership are painted in an extremely dark light in Ronan Farrow’s new book, “Catch and Kill.” The book about his Pulitzer Prize-winning reporting on Harvey Weinstein’s history of alleged sexual assault details Farrow’s assertion that NBC News tried to kill his investigative report because it was compromised by a history of misconduct claims against its own executives and stars.

Farrow asserts there was a general reluctance to take on the explosive subject in part because of ties to Weinstein at NBC News and at NBCUniversal. NBC News maintains that Farrow had no Weinstein accusers on the record at the time in August 2017 when they parted ways on the story. Farrow asserts that NBC News first suggested that he try to find another editorial home for his story. NBC News maintains Farrow asked for the right to go to another publication.

Farrow makes a case that NBC News and its practices around harassment complaints and settlements were part of a broader culture of cover-up and protection for wealthy and powerful predators. NBC News president Noah Oppenheim is depicted in particularly unflattering light as Farrow pursued his investigation in the summer and fall of 2017.

Farrow also details a history of alleged affairs and settlements involving NBC News chairman Andy Lack in the 1980s and ‘90s. He describes MSNBC president Phil Griffin as allegedly engaging in boorish behavior with female colleagues, and he faults Lack, Griffin and Oppenheim for communicating with Weinstein and his legal team about the status of the story while Farrow was knee-deep in reporting. Farrow suggests that Oppenheim was concerned about fallout from taking on Weinstein on his future prospects as a screenwriter. A longtime news producer, Oppenheim shifted into unscripted TV production and screenwriting for several years before he returned to NBC News in 2015. He was promoted to NBC News president in February 2017.

Farrow reports that Weinstein’s assistants came to refer to Lack, Oppenheim and Griffin as “the triumvirate” because Weinstein was calling them so often in 2017 as his reputation and company began to unravel. In October 2017, exposes in the New York Times and Farrow’s reports in the New Yorker led to Weinstein’s downfall. He is now facing criminal charges in New York, with a trial set to begin in January.

NBC calls Farrow’s suggestion that the network looked the other way amid reports of Lauer’s behavior “absolutely false” and denies being involved in any sexual harassment settlements on the anchor’s behalf prior to his firing. “Only following his termination did we reach agreements with two women who had come forward for the very first time and those women have always been free to share their stories about Lauer with anyone they choose,” NBC News said in a statement.

On the subject of National Enquirer parent company AMI trying to pressure NBC News on Lauer, NBC said in a statement that they were “never contacted by AMI, or made aware in any way of any threats from them, or from anyone else, for that matter. And the idea of NBC News taking a threat seriously from a tabloid company about Matt Lauer is especially preposterous, since they already covered him with great regularity.”

NBC has been bracing for the Oct. 15 publication of Farrow’s book and has mounted a vigorous rebuttal to some of his assertions. Oppenheim disputes the characterization that he “killed” the story. Farrow, in his view, was not a full-time NBC News employee, but rather working off a contract after the MSNBC daytime series he anchored in 2014 and 2015 was canceled.

Oppenheim and others at NBC News maintain that they were trying to work with Farrow on getting the sourcing needed to make the story reportable on-air.

“At every turn we tried to widen the group of reporters and editors working on the story,” Oppenheim says. “At times he was utterly dismissive of efforts to get at the story in different ways.”

The material Farrow gathered after months of work on the story was reviewed by a team of NBC News investigative veterans in early August 2017. The biggest hurdle was that he had no accusers on camera naming Weinstein. Farrow’s first Oct. 10, 2017, report on Weinstein in the New Yorker had allegations from multiple women who were not included in the reporting that he presented to NBC News.

Farrow maintains that by August 2017 he was barred from conducting more interviews with sources in the Weinstein investigation. NBC News said it blocked Farrow from using a camera crew because he had already informed them he was taking the story to another outlet. NBC asserts that the interview was to be shot with the accuser speaking anonymously and in shadow, which would not be enough to get the story over the hurdle for air.

“His reporting wasn’t anywhere near ready for airing. There was not a victim on the record,” said Rich Greenberg, head of NBC News’ investigative unit. Farrow was also “overstating his sourcing” in some instances, Greenberg says. “It was unanimous in the (August) review that the story was not ready.”

Farrow states in the book that one of the “Dateline” executives who reviewed his work was veteran executive producer David Corvo, who was allegedly the focus of a 2007 harassment claim from a woman that led to a $1 million settlement years later, which NBC paid the day after Corvo reviewed Farrow’s work. NBC in a statement disputed that the complaint involving Corvo was the source of the settlement with the employee.

“The individual’s departure over a decade later and any compensation paid was completely unrelated to the complaint,” NBC said.

Oppenheim is portrayed in “Catch and Kill” as downplaying the significance of an audio recording that Farrow obtained of Italian model Ambra Gutierrez as she tried to rebuff Weinstein’s effort to bring her into his New York hotel room in March 2015. The exchange presents Weinstein as both desperate and threatening, and it makes reference to an earlier incident in which Weinstein touched Gutierrez’s breasts. Farrow quotes Oppenheim, after listening to the recording, as questioning whether Weinstein’s actions amounted to a “crime.” “Harvey Weinstein grabbing a lady’s breasts a couple of years ago, that’s not national news,” Oppenheim said, according to Farrow.

Oppenheim also told Farrow that the recording and his Weinstein reporting would force them to “make some decisions … like, is this really worth it?”

Farrow accuses Oppenheim of trying to slow down his reporting process by raising the question of his having a conflict of interest on the story because of his family’s past ties to Weinstein and the allegation that his sister, Dylan Farrow, was molested by their father, filmmaker Woody Allen. Oppenheim presented a 1990s news story in the Los Angeles Times about Miramax rallying behind Allen to distribute his movies after the molestation allegation. Ronan Farrow has been outspoken in his support of his sister’s account of the 1992 incident.

Farrow challenged the assertion that this presented a conflict of interest. Oppenheim says he raised it not as a roadblock, but as a concern that Farrow needed to keep in mind. He also made a risque comment that caused Farrow concern.

“I’d be happier if (Weinstein) found video of you f—ing in a bathroom or something,” Oppenheim tells Farrow, according to “Catch and Kill.”

Oppenheim counters that Farrow began to pressure NBC News to rush the story on the air because he feared he would be beaten on the Weinstein story by the New York Times, which was also working on an expose. Farrow made it clear within NBC that he was concerned about earning credit for bringing down a major film industry figure.

“He felt a sense of urgency and competitive pressure,” Oppenheim said. “He was concerned about getting credit. He said ‘I’ll get scooped and no one will ever know I worked on this.’”

Farrow in the book said his exchanges with Oppenheim left him with the feeling that the network was trying to quietly squelch the story.

Oppenheim and others involved with the story at NBC News vehemently deny that they tried to stop him from pursuing Weinstein.

“All we’ve asked of Ronan is that he tell the truth — that when he left NBC he did not have a single victim or witness to misconduct by Weinstein willing to go on the record and that is why a large circle of his colleagues, including the head of the investigative unit and two of the most seasoned investigative reporters in the newsroom, all agreed that he did not yet have a story that was ready for air,” Oppenheim said.

Farrow describes in detail the turmoil he felt as he came to believe that NBC was working against him. He describes walking through the “Today” newsroom after a meeting with Oppenheim with “battery acid in my mouth and red parenthesis in my palms where I had pressed nails into skin.”