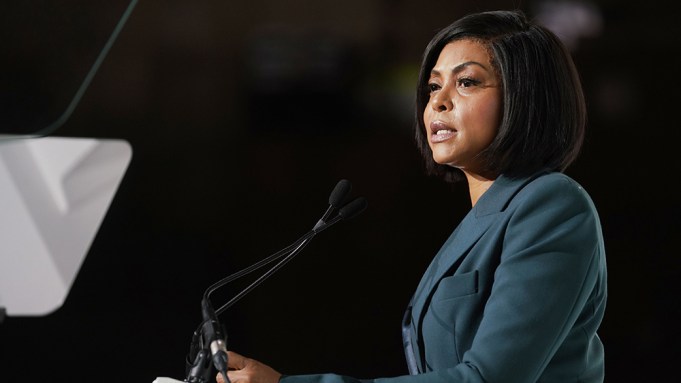 “When a job needs to be done and nobody’s doing it, you step forward and you do it yourself,” said Bette Midler, one of five notable industry figures celebrated this year. “That’s what empowerment means to me.”

Midler was feted at Friday’s gathering at Cipriani Midtown for her role as the founder of New York Restoration Project, an organization that has worked to create a “cleaner and greener” New York City since 1995.

“If you would have told my 16-year-old self with my awkward can-I-speak-to-your-manager haircut that I would be in such a room with accomplished and intellectual women, I would have said you’re full of s—,” Musgraves told the crowd.

Variety editor-in-chief Claudia Eller hailed the honorees for possessing the “special brand of fearlessness, outspokenness, and tenacity to make a whole lot of noise about the pressing issues of our time.”

Comedian Michelle Wolf pulled no punches in her role as host, kicking off the afternoon with a string of zingers.

“I heard if we’re good next year they’ll promote us to dinner,” Wolf said of the lunchtime gathering. “Nothing says ‘We are here’ better than assuming women have nothing to do in the middle of a work day. Who do they think we are, the president?”

Wolf also encouraged women to strive for parity with men in all aspects of life – even when it’s uncomfortable to do so.

“We may have a vagina but that shouldn’t prevent each and every one of us from acting like an a–hole,” she quipped.

The influence of the #MeToo movement and the gender equality activism of the past few years was ever present in the remarks from the stage.

Three women who were featured in Lifetime’s “Surviving R. Kelly” docuseries, which re-ignited criminal prosecution of the R&B singer accused of sexual misconduct with underage girls, were given a moment at the mic to explain the importance of media in exposing wrongdoing.

“Abuse has no limit,” said Kitti Jones, who stood with Asante McGee and Lisa Van Allen. “You’re not exempt from being abused or being a victim. It could happen to anyone.”

“CBS This Morning” co-anchor Gayle King was on hand to present the Power of Women kudo to Musgraves. King sung a few lines from Musgraves’ hits and told the crowd she appreciated the singer-songwriter’s efforts to appeal to fans outside of the core country music demo. “She’s got heart,” King said of Musgraves. “That’s the most important thing of all.”

Musgraves spoke of her journey from her tiny hometown of Golden, Texas, to becoming a professional songwriter and performer after she moved to Nashville. Given that the “native language” in the Lone Star state is sports, Musgraves said she’s dismayed at how often music and arts programs in schools are cut to help shore up athletic activities.

Music is “the glue that holds humanity together in times of chaos,” Musgraves said. “Art is no luxury. It’s as natural an element as fire or water.”

Hadid was emotional as she recounted her trip with Unicef last year to a massive refugee camp in Bangladesh. “The camp was the same size and population as Washington, D.C.,” she said.

The fortitude of the women and children at the camp made a deep impression on Hadid.

“Even with their lives in limbo these women and girls had such desire to do more and be more and get educated to better their lives,” she said. Hadid choked up as she added: “At the end of the trip, I went home and they were still there.”

Yara Shahidi, star of the Freeform comedy “Grown-ish,” hailed Henson as “the epitome of multivariants,” a nod to the real-life math whiz Katherine Johnson that Henson portrayed in 2016’s “Hidden Figures.”

Henson said the goal of the foundation she named after her father was to bring awareness among African-Americans of the need for “breaking the silence and breaking the cycle of shame” around mental illness.

Henson’s foundation is active in fundraising and advocating for more social workers and counselors available to youth in the most at-risk communities. She hopes to “ensure that we have enough soldiers to fight the battle.” Henson choked up as she cited a chilling statistic that underscores the need for better education on mental health issues. “The number of black children ages 5-12 who have died by suicide has doubled since the 1990s,” she said. “This is a national crisis.”

Jeff Zucker, CNN Worldwide chief and chairman of WarnerMedia News and Sports, presented the kudo to Amanpour. He detailed her rise from a production assistant in CNN’s Atlanta offices to a globe-trotting, fearless correspondent who made her name covering the Gulf War and exposing atrocities in Bosnia-Herzegovina in the 1990s.

Decades later, Amanpour is still “calling out the lies and still holding those in power accountable,” Zucker said.

Amanpour noted the alarming rise in attacks on the freedom of the press and urged the crowd to stay vigilant against those who wield the concept of “fake news” as a tool to suppress truth. Journalists, she stressed, are the first line of defense.

“We go toward the danger, we don’t run away from it, in order to tell those truths,” she said. The Committee to Protect Journalists is an “incredibly important” organization that helps fight “those who would silence, injure or otherwise try to harm us,” she said.

The global voice of CNN is second to none in the effort to nurture free and open societies, she said.

“It’s about the truth, it’s about facts, it’s about being there, it’s about storytelling and being witness to history,” Amanpour said. “I really, really love this network.”

Midler was praised as “a lover of all living things – plants, animals, humans” by actress Julianne Moore.

Midler told the crowd that her passion for battling litter and pollution in public spaces stemmed from her childhood growing up in Hawaii, a place where “it is considered a sin to defile the ground with so much as a gum wrapper.”

New York Restoration Project started with Midler and a small crew picking up trash in a park near the George Washington Bridge. She was dismayed at the amount of waste and filth she found in New York when she returned to the East in 1994 after years in Los Angeles. She was heartened by how many New Yorkers were eager to join her effort, which quickly expanded to projects in all five boroughs.

“We have built parks. We have cleaned parks. We saved 110 community gardens from the wrecking ball,” Midler said. “We’ve hauled thousands of tons of garbage out of public spaces.”

Midler became emotional as she noted her growing anguish about the state of the country and the “social injustice” that she sees all around.

“I know in my heart the ground will shift and we will see common ground again,” she said. Her dream for a cleaner New York extends to achieving “a more just and more sane and more civilized and kinder and more prosperous and more loving planet.”

Michelle Ebanks, CEO of Essence Communications, was also recognized at the event with the Sundial SheaMoisture Community Commerce Awards for her work with the magazine that focuses on successful African-American women.

“We will invest our time and our treasure in economic justice for women,” Ebanks vowed.

Power of Women New York was presented by Lifetime, with music direction by Daisy O’Dell. Other sponsors included Audi, iHeartMedia, SheaMoisture, and JNSQ.