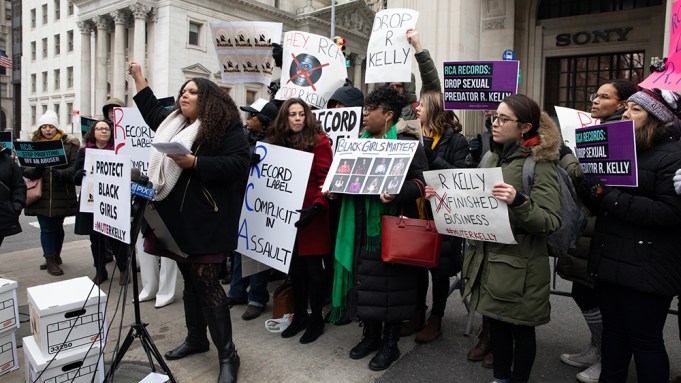 Standing in the cold with megaphones outside of Sony Music’s New York headquarters, a group of activists delivered the company, parent of Kelly’s longtime label RCA, a petition signed by over 217,000 people demanding that the singer be dropped from the label.

The rally comes less than a week after a plane carrying a banner that read “RCA/Sony: Drop Sexual Predator R. Kelly” was flown over Sony Music’s offices in Culver City, Calif. The national women’s organization that commissioned the plane, Ultraviolet, was also present at Wednesday’s rally in New York.

“RCA is showing women everywhere exactly what it stands for by keeping quiet about R. Kelly’s horrendous and completely unchecked abuse of young Black girls—abuse that has spanned decades without so much as a slap on the wrist,” said Rebecca Gerber, Senior Director of Engagement at Care2. “Since July 2017, we have worked with the #MuteRKelly founders to hold RCA accountable for its partnership with Kelly, and it’s time RCA took action. Reports that RCA won’t release Kelly’s new music are not even close to enough. The label must do better and sever all ties with Kelly immediately.”

“RCA and Sony Music should have dumped R. Kelly and taken a stand against his abuse of women a long time ago – and their continued inaction and silence is beyond shameful. Kelly uses his fame, fortune, and standing in the music industry to lure in and abuse young black girls – and because of the work of the #MuteRKelly movement, RCA Records can no longer pretend that Kelly’s music can be separated from his violent actions,” said Shaunna Thomas, co-founder and executive director of UltraViolet. “Kelly has been able to get away with his years of abuse precisely because his victims are young Black girls who face even more barriers to justice than their white peers – but that time is over.”