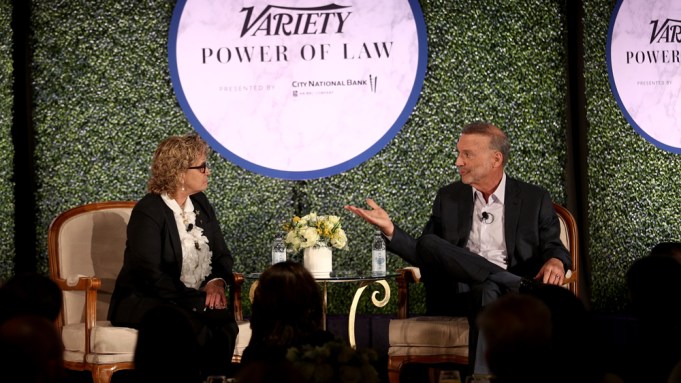 Entertainment law powerhouse Michael Gendler touched on a range of topics during a keynote conversation at Variety’s Power of Law breakfast presented by City National Bank held at the Beverly Wilshire Hotel on Wednesday, including the ongoing dispute between the Writers Guild and the major talent agencies.

Speaking with Variety‘s co-editor-in-chief Claudia Eller, Gendler said he does not believe the Guild and the agencies will reach an agreement by this Friday.

“It’s going to take compromise,” Gendler said. “People have criticized the guild for ratcheting things up and for awhile there, the dialogue felt like the national dialogue, which is a lot of name calling and people talking past each other. But in fairness to the Guild, I think the Guild did what it needed to do to get everybody’s attention, and not just the agents’ attention but its members’ attention. Having done that, it is my hope that they are going to use that leverage to work out a deal. I don’t think there is any upside to there being blood in the water and chaos.”

“This is something that needs to get resolved,” he continued. “It’s creating unnecessary tension. And I think it will get resolved, and we can move forward and deal with the bigger issue which is the issue of transitions in the business and what’s coming.”

The transitions Gendler mentioned specifically were those of how talent is being paid, given the fact that episode orders are being reduced nearly across the board. Whereas networks used to typically order 22-episode seasons of a show, with talent being paid on a per-episode basis, it is now commonplace for a season to run between eight and 13 episodes.

“It’s affecting people’s incomes in the middle, not necessarily at the highest end,” Gendler said. “And that’s not just anxiety, that’s fear. People’s incomes are going down.”

Gendler also spoke about negotiating a deal reportedly worth $100 million for super-producer Shonda Rhimes to move her Shondaland production banner from her longtime home at ABC to Netflix.

“Shonda really wanted to move from a company that is acting on a 1970s business model…to a company that was in the 21st century,” he said. “That’s not a knock on anybody at ABC. She likes all of them, I like all of them, but they were victims of their business model. They have advertisers, therefore they had standards and practices, therefore they had teams of people looking over what she did. They also needed 22 episodes, or in some cases when she would do short seasons of 12 or 15 episodes. She escaped all that with her 33-person company and went to Netflix.”

Gendler would not reveal the true worth of Rhimes’ new deal, saying it did not behoove his client nor Netflix for them to put a specific number out there.

“We were the first ones through the gate,” he said. “That number came out and we don’t know what the source of it was…We didn’t correct the record because first of all, it’s private. Secondly, we saw no upside in putting a target on Netflix’s back by announcing the value of the deal.”