Gigi Hadid Chokes Up During Power of Women Speech: ‘Be a Voice for Someone’ 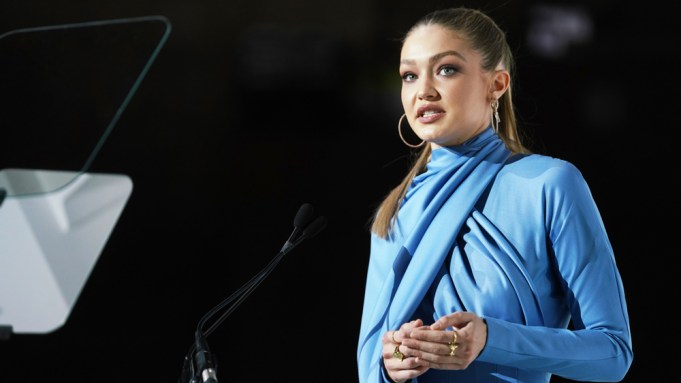 Gigi Hadid got choked up while accepting Variety‘s Power of Women honor on Friday.

The 23-year-old international supermodel, who has fronted campaigns for such brands as Marc Jacobs, Prada, and Chanel, has made waves in the past two years for her philanthropic work as a UNICEF ambassador. At Variety‘s Power of Women NY presented by Lifetime, Hadid spoke alongside fellow honorees Bette Midler, Taraji P. Henson, Kacey Musgraves, and Christiane Amanpour about using her fame to better the world.

The model went on to discuss the power of social media, a tool she utilized while traveling to Bangladesh, where she visited a refugee camp housing the Rohingya people, the majority-Muslim ethnic group fleeing Myanmar.

“Even with their lives in limbo, these women and girls had such desire to do more, to be more, and to get educated to better their lives,” she said at Cipriani in New York. “When we asked them how UNICEF could help in different ways, and most importantly, what they wanted us to tell the world about them, what it really boiled down to was that they want an identity.”

“At the end of the trip I went home, and they were still there,” Hadid said, tearing up.

“Yes, we can donate. Yes, we can help them, and every donation really genuinely does save lives and help people. I saw it,” she added. “But that’s not what they wanted us to tell the world. They are human beings like all of us. What they would do for a citizenship, for an identity, to be able to scroll and type and have a voice in that sense.”

The model stressed the significance of the “gift of identity.”

“We can get so stuck in our own heads, and our own worlds can feel very overwhelming at times, but most of us have the true gift of identity, and the power to express ourselves, the power to speak out for those who cannot for themselves, and the power to uplift one another.”

“I feel resentment towards social media at times, but as I documented my trip with UNICEF, I understood the true value — someone is listening,” she said. “Be a voice for someone, support someone, encourage someone, tell someone how they inspire you. We cannot let the negative comments, the bad energy, and false assumptions of us keep us from doing the good we know we can do with our platforms.”

Hadid also talked about the integral role that social media played in her activism for her cover story. “Within a camp, I’m no one,” Hadid told Variety. “I’m there to share a smile. I’m there to share a moment with someone. When I would leave and get in a car, all I wanted to do was take everything I soaked in my brain and put it into my phone so I could get that information to the world. I wanted people to experience it with me.”

In her speech, Hadid thanked the women in her life who paved the way for her, including her mother and “oma.” “They are beacons of independence and integrity in our family, and I can’t explain what an amazing thing it is to have women like them to look up to,” she said.

She also nodded to her sisters, Bella, Marielle, and Alana Hadid, and “chosen sisters,” who were present at the luncheon. “Thank you for your love and support everyday of my life,” she said, telling Bella not to cry while holding back her own tears. “You are talented, you are hardworking, you are creative, kind, loyal, honest, and you are unapologetically yourselves, and you all inspire me in your own ways.”