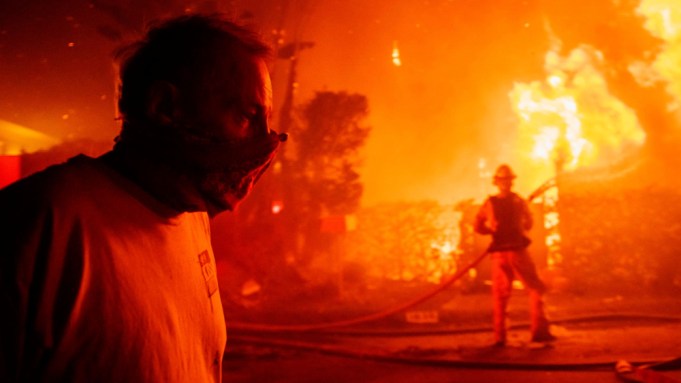 The Getty Fire was sparked by a tree branch that fell on a power line along the 405 Freeway, city officials said on Tuesday.

The fire quickly spread early Monday morning, burning 656 acres and destroying 12 homes. Thousands of people who live in Brentwood are still under evacuation orders. The fire is about 15% contained.

“This was, simply put, an act of God,” said Mayor Eric Garcetti at a press conference on Tuesday afternoon.

In Northern California, Pacific Gas and Electric has declared bankruptcy in the face of $30 billion in liabilities for brush fires caused by faulty equipment. Gov. Gavin Newsom and other officials have excoriated PG&E for prioritizing investors at the expense of maintaining equipment.

Garcetti and other city officials were emphatic that the Los Angeles Department of Water and Power, which is owned by the city, is not to blame for the Getty Fire.

“There is no failure of the electric system on this case,” said DWP general manager Marty Adams.

Garcetti said arson investigators were able to determine the cause using dashcam video from a passing vehicle. The Los Angeles Fire Department released video showing a flash of light in the distance. The investigation showed that a eucalyptus branch broke off and landed on power lines 25 feet away, causing the lines to arc as sparks fell to the ground.

The DWP does extensive brush clearing and branch removal around its power lines. Adams said the eucalyptus tree was outside the standard perimeter that is typically cleared.

“We don’t believe there is any liability in this case,” Garcetti said. “You can’t stop everything that happens, every gust of wind, every tree that might break.”

Officials warned that a major Santa Ana wind condition will begin around 11 p.m. on Tuesday, carrying the potential for new brush fires. Winds are expected to gust between 50 to 70 mph, and are not expected to subside until 6 p.m. on Thursday. The National Weather Service warned that the conditions will be as dangerous “as we have seen in recent memory.”