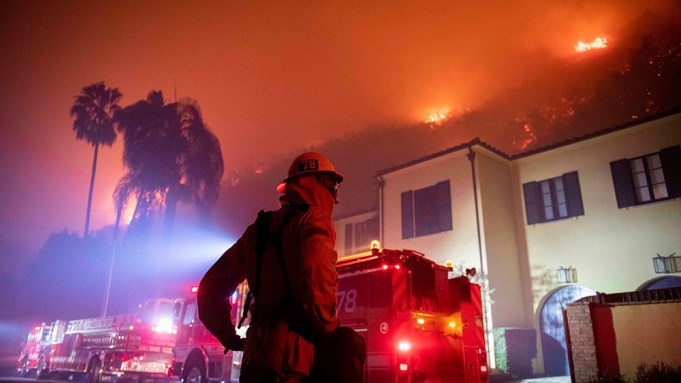 Thousands of residents of Brentwood and surrounding areas were forced to flee their homes in the early morning hours on Monday, as a fire swept through the hills near the Getty Center.

The Getty Fire grew to about 618 acres by midday, according to L.A. Mayor Eric Garcetti. Eight structures had burned and another six were damaged. Some 1,100 firefighters were battling the blaze, aided by moderate temperatures and calm winds. They were assisted by water-dropping helicopters and fixed-wing aircraft.

The fire started at 1:34 a.m. along the 405 freeway, near Getty Center Drive. It spread quickly over ridgelines into the area along Tigertail Road and Kenter Canyon. The Getty Center — an architectural marvel that stores priceless works of art — was out of jeopardy early Monday.

The California Highway Patrol closed the 405 freeway heading south, between the 101 freeway and Sunset Boulevard, at around 8:30 a.m. The northbound side remained open, and the southbound lanes were expected to reopen Monday evening.

As of 5 p.m., the fire was about 5% contained. Residents of the Mountaingate area, south of Mulholland Drive but north of the burn area, were allowed to return.

“We will let people know of course in the coming hours and/or days when you can safely repopulate,” Garcetti said at a press conference. “Right now, that is not open so we can make sure our emergency vehicles have what they need.”

Former Gov. Arnold Schwarzenegger was among those who evacuated, saying on Twitter that he left his home at 3:30 a.m.

“If you are in an evacuation zone, don’t screw around. Get out,” Schwarzenegger said. “Right now I am grateful for the best firefighters in the world, the true action heroes who charge into the danger to protect their fellow Californians.”

“Man these LA [fires] aren’t no joke,” James tweeted. “Had to emergency evacuate my house and I’ve been driving around with my family trying to get rooms. No luck so far!” He later tweeted that he had found a place to stay.

“Sons of Anarchy” creator Kurt Sutter also took to social media to share that he had been evacuated.

“Evacuated… Apparently, everything around me is burning the f–k down. Rough week,” he wrote, sharing a video on Instagram of the growing fire.

🔥🚒 Evacuated… Apparently, everything around me is burning the fuck down. Rough week. #gettyfire #itsahotworld

Fire department officials called the fire “very dynamic.” Strong winds early in the morning died down in the afternoon, and temperatures are moderate. However, forecasters predicted very strong Santa Ana winds will hit the area late Tuesday and into Wednesday. The winds on Wednesday are expected to be the strongest of the season so far, according to the National Weather Service, with gusts between 50 to 70 mph.

Mount St. Mary’s University, a Catholic college in Brentwood, was evacuated early Monday. UCLA also canceled classes on Monday, though the fire was not threatening the campus. About 2,600 homes were without power overnight, though that figure was cut to 900 homes by 7:15 a.m., according to the L.A. Department of Water and Power.

Sixteen schools in L.A. Unified School District are closed, including Palisades and University High Schools, along with several charter and private schools. All schools in Malibu and Santa Monica were closed as well. The Getty Center is closed on Monday. Several city recreation centers were opened as evacuation centers.

No injuries were reported. The cause of the fire is still under investigation.