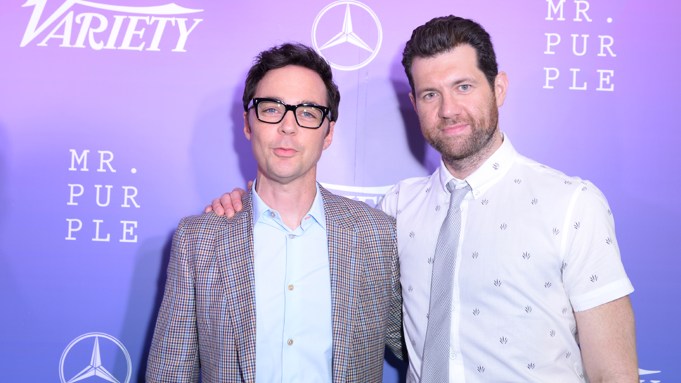 New York City felt the full Power of Pride on Monday, as Variety celebrated its inaugural issue devoted to the annual recognition of LGBTQ people worldwide.

At an intimate gathering at Mr. Purple, the rooftop bar at Hotel Indigo Lower East Side in Manhattan, Variety’s cover stars and luminaries gathered for cocktails and the unveiling of the Pride class of 2019 — including Asia Kate Dillon, Jim Parsons, Don Lemon, Hannah Gadsby, Billy Eichner and MJ Rodriguez.

“At Variety, we are at the forefront of covering the LGBT community and showcasing representation in the industry,” said Variety New York bureau chief Ramin Setoodeh, noting that this year’s Pride issue was packed with 45 pages dedicated to the topic. He credited Variety editor-in-chief Claudia Eller with coming up with the idea and championing the many stories in the issue.

Eichner, Parsons and Gadsby were among the inaugural Power of Pride cover stars high atop Lower Manhattan, dancing to a set from DJ Daisy O’Dell. On the carpet, Gadsby opened up about her relationship with Pride, something that isn’t always so cut and dry for her.

“It’s busy, it’s real busy,” Gadsby said about the current pride celebrations. “It’s a complicated thing for me. I found it quite recently so, you know, it’s an absence of shame.”

A number of other powerful LGBTQ people and their allies from across Hollywood, news media and the Fortune 500 list converged, including “Queer Eye” kitchen master Antoni Porowski, cover star Don Lemon (who dipped out early to take his evening anchor chair), Fox’s Shep Smith and “A Star Is Born” breakout and noted drag star Shangela. Leyna Bloom, the first trans woman of color to ever headline a movie at the Cannes Film Festival, also stunned in a sequin gown.

Before heading out, Lemon took time to speak out in favor of the many trans individuals within the United States military, highlighting their importance to the army. “Look out for our trans brothers and sisters in the military because trans people are just as patriotic, and just as brave, as anyone,” he told Variety’s Marc Malkin on the gray carpet.

Eichner also used the carpet to touch on a number of issues within the LGBTQ community, including the backlash surrounding Taylor Swift’s recent “You Need to Calm Down” music video.

“You know I think overall we need all the allies we can get. I was really genuinely impressed by how vocal Taylor was during the midterm elections, telling her following to vote, coming out on behalf of democrats even though she’s from the south and a deep red state,” he said. “I really thought that was so important. She got so many people into the system who now will hopefully continue to be in the system and continue to be politically engaged.”

Elsewhere in the party, Mercedes Benz offered a custom denim jacket booth where guests at Mr. Purple could customize their own outerwear with Pride-friendly decals. Other guests also took turns signing a decorated denim jacket with a Pride patch on the back.