Inside the Wild Yet Believable Action of ‘Hobbs & Shaw’ 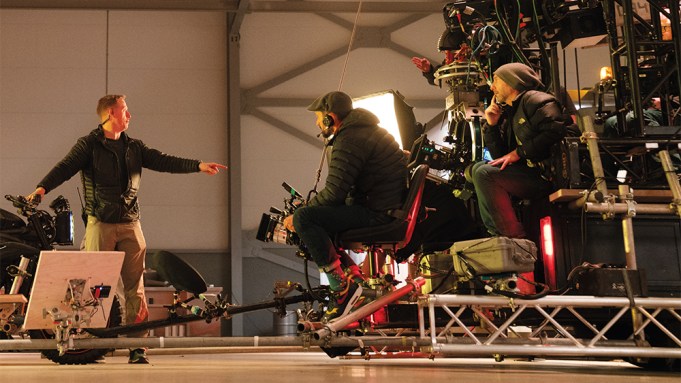 “The hardest part is coming up with concepts and trying to be unique and different,” says O’Hara about working on the franchise’s ninth film and its first spinoff. The crew thought of the “wackiest things out there, and we were trying to achieve them.”

Since car chases are integral to the movie, which stars Dwayne Johnson and Jason Statham, O’Hara had to balance inspiration with financial constraints. “You start massaging the scene to fit into your budget,” he says, which means weighing the beats in every sequence.

A McLaren 720S was used for one of the major car-chase sequences. The car presents an unusual challenge in that it’s designed so the average driver doesn’t have access to its full racing capabilities. “We spent a week with a McLaren technician [reprogramming] the car on the fly,” says O’Hara. “The tech rode in the car with [Martin Ivanov, Statham’s stunt-driving double] and his laptop was linked to the McLaren racing facility.” As Ivanov maneuvered, he gave the tech feedback about what was needed and the adjustments were made instantly.

All of Ivanov’s stunt driving took place in Glasgow, which stood in for London. “It was quite cold,” he says, “so you have less traction on the wheels. It was quite slippery.” Since all three leads participate in the car chase, Ivanov shared the two-seater with the stunt doubles for Johnson and Vanessa Kirby, driving at around 100 mph on some of the straightaways. “It was quite packed inside the car,” he says.

O’Hara and his team worked closely with costume designer Sarah Evelyn to tailor the clothes to move with the actors and look good in the car. Actors need to look comfortable in their costumes and not worry about them splitting at a key moment, she says.

The stunt actors would bring their own padding to wear under the costumes and “do a bit of the action [during fittings],” says Evelyn, “which really helps you figure out how to make your clothes work.”

The shoot moved to Hawaii for a major fight sequence that involved a Samoan-based haka battle challenge followed by a clash with a rival crew headed by Idris Elba. While it appears everyone charges haphazardly into the melee, it was intricately set up by O’Hara and fight choreographer Greg Rementer. Everyone learns which character they are running toward, and then each element of action is planned and rehearsed.

Part of making the fight look good is showing contact, says O’Hara. So the prop clubs had to be “soft enough to sell the actual hit, but not so soft that it doesn’t look real.”

One costume piece audiences may spot in the scene is made from a boar jaw provided by Kap Teo Tafiti, the shoot’s Samoan cultural adviser. Evelyn had it aged and dyed. “It became the most magical, amazing necklace,” she says. Her team tacked it down to the shirt of the background actor who wore it so that it wouldn’t fly up in his face. Hand-sketched boar tusk necklaces were made for a number of other extras.

While O’Hara acknowledges that visual effects enhance his work, audiences may be unaware of the authenticity of certain elements. “When you see it live when you’re shooting,” says O’Hara, “you know nobody’s going to believe [just how real it is].”