How Netflix’s ‘Green Eggs and Ham’ Expands the World of the Dr. Seuss Classic 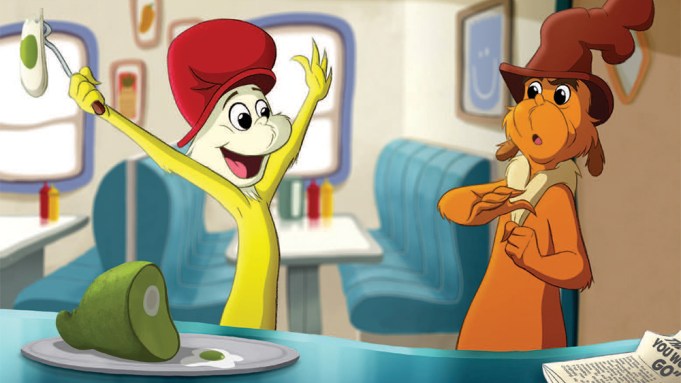 Netflix is serving up Dr. Seuss’ classic book “Green Eggs and Ham” with a large helping of traditional animation. The series, created and executive produced by animation veteran Jared Stern, expands the story of the delicacy’s persistent champion Sam I Am and picky eater Guy Am I as they go on a road trip to rescue an endangered creature from a zoo, learning about hope, trust and friendship along the way.

The process of bringing the book to Netflix was a long one, with Stern dedicated to ensuring the production stayed true to the look and spirit of Theodor Geisel’s 1960 story while giving the series a feature-film quality with hand-drawn animation.

“There were four years of actual production. That was intentional, and that’s about normal for the quality of animation that we were aspiring to,” Stern says. “A typical animated film can take close to three to four years for generally an hour and a half of content. We have, I believe, around five and a half hours of content that we were trying to do at the level of a hand-drawn animated feature in that same amount of time.”

When Stern was approached about adapting “Green Eggs and Ham,” he remembered it as a childhood favorite but wondered how to expand it. He began by rereading the book. “I started flipping through, and I go, ‘OK, it’s an odd-couple story, right?’ It’s a classic mismatched buddy thing: grumpy guy who’s closed off, silly guy who’s open and pushy. But not only that, it’s a road trip, because he won’t eat them here, and he won’t eat them there; he won’t eat them in a car, in a boat, in a train. And so I was like, ‘It’s “Planes, Trains and Automobiles.” It’s “Midnight Run.” Two of my favorite movies. I just love that genre, and so I was like, ‘What if you did that genre but in a Seuss land?’”

Another part of the process was getting the approval of Geisel’s estate. Stern and fellow exec producer Jeff Kleeman got the chance to pitch directly to Geisel’s widow, Audrey, five years ago in her husband’s office. “As if it wasn’t intimidating enough to be pitching, ‘Hey, this is my take on this beloved property that’s a very small story and book, and I’m going to explain to you how I want to try to turn it into this whole crazy thing,’” Stern says, “to have to do it in his office was a lot of pressure.”

Stern recalls driving up to the Geisels’ home. “We drove up a windy road to Dr. Seuss’ house on top of a hill overlooking the ocean, with a single tree; the perfect view of a single, kind of windy tree, that felt like all of his trees.”

The Geisel estate warned Stern and Kleeman that Audrey Geisel, who died last year at age 97, would only be able to listen to the pitch for about 10 or 15 minutes, according to Stern, but she  sat for the entire half-hour pitch. “She listened to the whole thing and said, ‘I wondered how you were going to do this, because that seems like a crazy challenge to turn this book into something, but you did it, and you absolutely have my blessing,’” recalls Stern. “That was lovely.”

That blessing meant that the project had to be particularly faithful to Seussian sensibilities while expanding the story. “The spoon one character is stirring has to be a specific Seussian spoon, and the coffee cup is a Seussian coffee cup,” Stern explains.

The show incorporates all of the beloved characters and locations of Dr. Seuss’ original story: “The book has the grumpy guy who doesn’t have a name [now named Guy Am I], there’s Sam I Am, there’s a house, and a boat, and a car, and a train, and there’s a mouse, and a fox, and a goat,” Stern notes. And there’s a chickaraffe. Wait, a what? That’s something new.

“If you’re going to tell 13 episodes, you need to add a bit more, but I started from the kernel of the book: Grumpy guy doesn’t want to try new things and the guy who wants him to try it, and they’re going on a trip,” Stern says. “Then as I thought about “Midnight Run,” and, okay, well someone’s chasing them. Who’s chasing them? Who are the bad guys? Then if they’re chasing them, why are they chasing them? I needed some kind of MacGuffin, a thing that the bad guys want, and so that’s the chickaraffe. It’s this rare, endangered animal and our big bad guy Snerz wants it.”

Could this be the start of more Seuss adaptations for Stern? He says this project has made him an even bigger fan on Seuss. “I’ve read every Seuss book now, and at a panel we did recently someone asked me, ‘Do you think that Seuss will be applicable to this current generation of children?’ And I said, ‘If you read his stuff, it’s shocking how much it’s still applicable,’ particularly because the lessons are so digestible and not didactic. He was talking about nuclear proliferation in ‘The Butter Battle Book.’ He was talking about autocracy in ‘Yertle the Turtle.’ And he was talking about prejudice, literally not judging a book by its cover or a dish by its color in ‘Green Eggs and Ham.’ So I think [Seuss] is absolutely relevant now.”