Continue to Variety SKIP AD
You will be redirected back to your article in seconds
Sep 11, 2019 11:15am PT 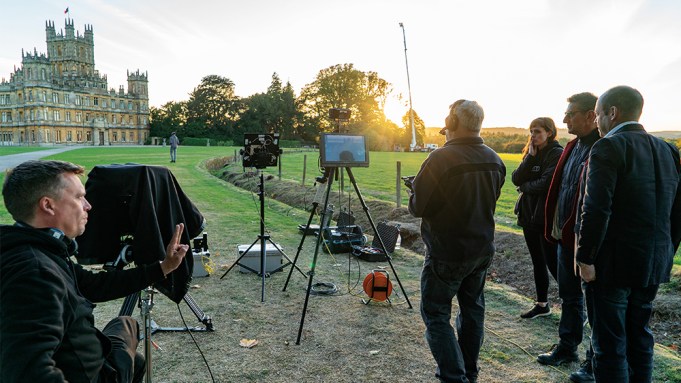 The feature continuation of “Downton Abbey” reunites the cast and much of the crew of the period TV series with a mandate to deliver more of the glamour, drama and just plain kindness that prompted millions of viewers on both sides of the Atlantic to fall under the spell of the sprawling Crawley family.

“We wanted to make it more luxurious, more exotic, more visually stimulating, more cinematic,” says production designer Donal Woods, who worked on all six seasons of the series as well as the feature, which bows Sept. 13 in the U.K. and Sept. 20 in the U.S.

Written by series creator Julian Fellowes and directed by Michael Engler, the feature reunites Maggie Smith, Michelle Dockery, Hugh Bonneville, Elizabeth McGovern and Jim Carter, and brings in newcomers Imelda Staunton and Geraldine James, as part of an ensemble cast with 17 lead characters. The story picks up in 1927, a few years after the series’ end, to find King George V and Queen Mary of England about to pay a royal visit to the Crawleys and their hard-working staff at Downton.

Woods was focused on giving the audience more than it ever had before, from a parade in collaboration with the King’s Troop, Royal Horse Artillery, right down to the Crawleys’ silver serving platters. The feature schedule and budget were more forgiving, he says, and gave the crew time to restore and refurbish work originally done for the series, which earned 69 Emmy nominations, a record for a non-U.S. show.

“All the sets had been in storage, and we had to refurbish them completely,” says Woods, whose credits include “Cranford” and “State of Play.” “It wasn’t that we hadn’t put the hard work in them in the beginning, but they’d had six years of heavy use and needed tender, loving care.”

Because viewers already know the characters and their arcs, the visual storytelling was allowed to make the saga bigger — using large-format cameras, wide-angle lenses, sweeping shots of the English countryside and a dozen gorgeous flyovers of Downton Abbey at golden hour — and at the same time more exacting, says cinematographer Ben Smithard, whose credits include “Blinded by the Light” and “The Second Best Exotic Marigold Hotel.”

“The idea was to make each shot as perfect as possible,” because the story takes place in a moment in time where perfection was the most important thing in the aristocracy of England,” says Smithard. “It was all about detail, because that’s what the [characters were obsessed with]. The Downton staff dealt in detail, whether it be place settings, the dinner presentation, the garden and each and every piece of furniture.”

Though Smithard was new to the “Downton” crew — eight cinematographers shot the series; the bulk was done by Nigel Willoughby — his experience is in dramatic British feature films. Smithard had worked with many of the producers, actors and crew, including Woods, on the 2011 feature “My Week With Marilyn.”

While the “Downton Abbey” TV show occasionally took viewers outside Downton or even outside Yorkshire, the majority of scenes took place in and around the manor. Smithard’s goal was to bring scope to the story, which he managed with shots of chugging steam trains, breathtaking aerials of Highclere Castle (the location used for Downton Abbey), a royal parade and a night in a speakeasy. “The story needed to move away from the house and then come back,” he says. “That was part of the story before, but I just made it bigger and more expansive.”

Smithard says that as soon as Sony’s Venice CineAlta camera came out, he knew that would give him the more epic images he was going for on “Downton Abbey” with no fuss.

“The methods I approached ‘Downton’ with were similar to the methods I’ve always used on period films,” says Smithard, whose avatar is Oscar-winning DP Roger Deakins, who has stuck with the same methodology and equipment for the last 10 films he has done. “I’ll experiment with formats, but only if I feel it’s totally necessary, because otherwise it becomes a little bit gimmicky. The camera is just a tool for shooting images, and I need it to be reliable and fast without any surprises. I want the surprises to happen in front of the camera.”