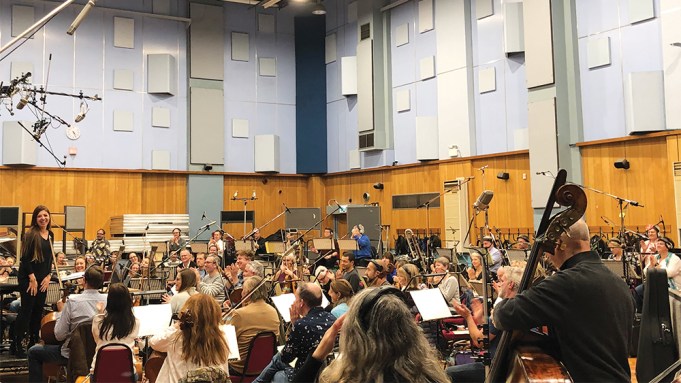 With the March 8 opening of “Captain Marvel,” composer Pinar Toprak becomes the first woman to score a Marvel superhero movie — possibly the most high-profile accomplishment yet for a female in a notoriously male-dominated profession.

But the Turkish-born musician isn’t interested in gender comparisons. “No man was ever asked, ‘Do you think you got this action film because of your gender?’” she says. “I hope it’s a question that’s not going to be asked in the near future, or ever again. This is going to be the norm. I never had a day in my life when I wasn’t a woman or a composer. Those were who I am from the start.”

Co-director Anna Boden notes, “It’s no secret that both we and Marvel care about trying to be proactive in terms of hiring more women,” while her colleague, co-
director Ryan Fleck, points out that the filmmakers did not limit the employment pool. “We weren’t just considering women,” he says. “We just decided that Pinar was our favorite.”

In fact, Toprak’s music soars and thrills like that of previous Marvel movies. Also, in a rarity for many modern scores, audiences leave the theater humming her catchy theme for the title character, played by Brie Larson.

“She’s one of the most powerful beings in the universe, but she’s also very human,” Toprak says of her inspiration for the theme. “Emotions don’t take away from her strength. She’s strong yet sensitive. I wanted to hear the humanity instilled in the hero.”

Yet that’s only one aspect of a 100-minute score that needed to identify characters, drive the action and suggest time and place. Toprak worked for five months to craft a score that would also musically define the Kree and Skrull races, whose centuries-long interstellar war forms the backdrop of the story.

The result, Toprak explains, is a hybrid orchestra-plus-electronics score. “We wanted a cosmic sound, and then we very much had 1990s Earth,” she says. Working in her home studio, she manufactured colorful analog-synthesizer sounds for the aliens. But it was a 90-piece orchestra recorded at London’s Abbey Road Studios that played her heroic theme and provided the foundation for most of the score.

Adding spice is the occasional sound of an electric guitar. “We really loved that idea for Fury,” she says, referring to SHIELD agent Nick Fury (Samuel L. Jackson), Captain Marvel’s Earth-based partner during the adventure. “It was very much a ’90s action-cop-movie sound.”

In at least one sense, Toprak’s journey parallels that of the Captain Marvel character: a resourceful young woman on her own, starting from scratch in a completely new environment. “Growing up, there were so many people who told me what I couldn’t do,” she recalls. She left for America at age 17, knowing very little English; she first studied jazz in Chicago, then learned to score films at Boston’s Berklee College of Music.

Moving to L.A. in 2000, she earned a master’s degree in classical composition at Cal State Northridge and managed to land a programming position in Hans Zimmer’s Santa Monica studio. Since then, it’s been a gradual rise through the ranks — short films, documentaries, B-movies, video-game scores — leading up to an “additional music” credit on another big superhero movie, “Justice League,” in 2017. In quick succession came music for the popular online game Fortnite and, in 2018, music for another comic-book story, the Syfy series “Krypton.”

Offered a chance to audition musical ideas for “Captain Marvel,” Toprak pulled out all the stops. She composed about seven minutes of music and hired a 70-piece orchestra in L.A. to perform it. Then she created a short video of herself in her studio explaining her ideas. She won over directors Boden and Fleck and got the job.

One sequence in the film especially resonated with the composer: “Every time she falls, she gets up,” Toprak recounts of the lead character. “I’ve had a lot of falling moments in my life as well, then getting up and learning to get up faster and going even farther the next time. I definitely have a deep connection to the story.”

Since her work on “Captain Marvel,” Toprak has scored a Pixar short (“Purl,” which pointedly skewers old-boy networks) and is now composing the second season of “Krypton.”

“I’ve never had a plan B in my life,” she says, “because I believe that most people who have a plan B will end up doing plan B.”