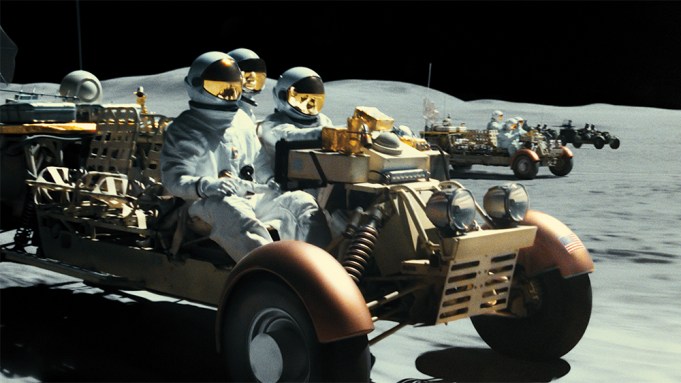 In “Ad Astra,” Brad Pitt’s astronaut Roy McBride crosses the solar system to find and confront his long-lost father, requiring the movie crew to create an authentic-looking future that conveys the theme of traveling long distances to learn the lesson that it’s where you started from that has the most value.

“Visually, the aim was to be as naturalistic and believable as possible,” says production designer Kevin Thompson, whose credits includes “Okja,” “Birdman” and “Michael Clayton,” and who worked closely with director James Gray to find a futuristic yet familiar look for locations on Earth, the moon, Mars and beyond.

A relatable and nostalgic touch was struck for settings on Earth, with Thompson using greens from nature and sky blues that contrasted with the underground worlds created for the moon and Mars. “We wanted the moon to feel like it had been conquered by contractors,” says Thompson, who says one key reference was Al Reinert’s 1989 documentary about the moon landings, “For All Mankind.” “We used a mix of things to design the lunar airport to give it a slightly familiar feeling.”

Standing in for the infrastructure of the subterranean community of Mars was an old Los Angeles train station built five floors underground and abandoned in 1955. Thompson aged the location with texture and patina to give the impression that a civilization had been living there for years. Collaborating with cinematographer Hoyte van Hoytema, the crew added details relating to the color and quality of light on Mars.

Thompson had to distinguish each spacecraft McBride uses throughout his journey, researching real-life vessels including the International Space Station, Spacelab and Russian ships. He connected with NASA to pinpoint today’s science and technology to inform the designs.

Every ship’s visual motif was “organized chaos” — small yet efficient; Thompson detailed each with pneumatic structures and 3D-printed pieces to add a futuristic look without making them gargantuan. “We liked the utilitarian aspects of the ships, where everything was useful instead of glamorized,” Thompson says. “We wanted to be able to walk into the cockpit and tell you what each little thing down to the stickers meant — we wanted to make every detail right.”

Creating a claustrophobic feeling lent an air of authenticity to the spaceships. “There’s clutter, but there’s logic behind the madness,” Thompson says. The tight spaces also subliminally heightened the intensity of one scene in which McBride fights his way aboard a spaceship leaving Mars, and another in which a shuttle crew answers a distress call from a stranded vessel.

For spacecraft scenes needing a zero-gravity environment, Thompson designed two sets: one horizontal and the other vertical for stunt work. The vertical versions needed to be open at both ends for camera and wire work, requiring VFX supervisor Allen Maris and his team to composite in images of the cockpit at the end of the set.

Maris says it was important to Gray that the visual effects didn’t distract viewers from the story. “James didn’t want a glossy Hollywood production but more of something with a ’60s or ’70s feel to it,” he explains.

For the VFX that meant anchoring camera movements to a subjective point of view rather than creating overstylized shots. VFX vendors including Weta, MPC and Method Studios touched more than 70% of the shots in the movie, especially the opening sequence, which has McBride working atop an antenna that reaches space through Earth’s atmosphere.

For a key scene in which McBride and company are chased across the moon’s surface by pirates on rovers, Van Hoytema shot in the Mojave Desert using a 3ality stereo rig mounted with one regular camera and one shooting infrared. The infrared camera “brings in pure black skies and very bright overexposed highlights that turn the desert ground into a white and high-contrast look that’s similar to the moon,” he says. VFX later combined the shots and extracted color information to blend them. To finish the look, VFX replaced some of the mid-ground elements and extended the set beyond the speeding rovers.

The VFX team’s pursuit of realism also included creating magenta skies for Mars based on photographs provided by the Jet Propulsion Laboratory, mimicking the camera angles NASA uses for rocket launches and simulating the gravity of the moon and Mars. The team also researched the rings of Neptune to ensure that the amount of time it takes McBride to travel a particular distance made scientific sense.

“We wanted to make it all very real,” says Allen. “If it’s not done well, audiences will not buy into or believe the story — and that’s the most important thing.”