Capturing the Sounds of War in National Geographic’s ‘The Cave’ 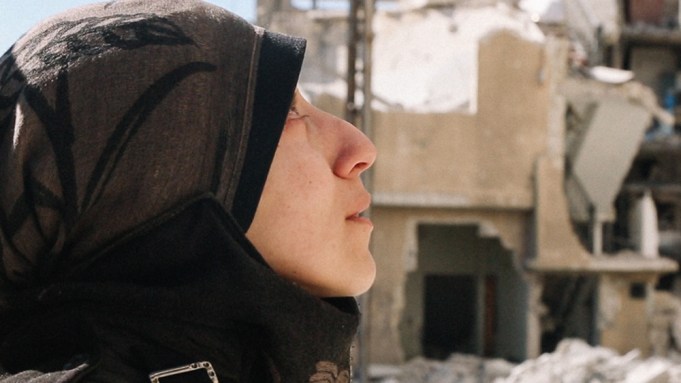 When director Feras Fayyad and sound designer Peter Albrechtsen spoke about “The Cave,” Fayyad knew sound was going to be an important element in the documentary. “The Cave” depicts the harrowing and true story of the Syrian War. As bombs rattle the walls of a Syrian hospital and planes fly overhead, Dr. Amani Ballour and her fellow doctors tend to Syria’s wounded civilians.

Albrechtsen worked on Christopher Nolan’s “Dunkirk” and is no stranger to finding the perfect sound palette that Fayyad was looking for. With the sounds of war all around the hospital, Fayyad wanted the sonic experience to be about what the audience hears, but doesn’t see. “He wanted the audience to feel what it was like to be in the cave. And sound can be incredibly emotional. It touches you in a way that goes beyond words and logic, it touches you deep inside and can be both beautiful and brutal, poetic and visceral,” Albrechtsen explained.

Two words you wouldn’t normally associate with documentaries are Dolby Atmos, yet it was important to the sound design of this to create the immersive element of the documentary. It’s not a sound reserved exclusively for action-packed blockbusters.

He explained, “One of the unique things about Dolby Atmos is the speakers placed in the ceiling. These were perfect for ‘The Cave’ as the war is happening on top of the characters. We could have the sounds of war coming from above the audience. It really means the audience is in the middle of the cave, in the middle of the chaos.” Atmos helped create the enveloping sound of war and create the impact of what the audience is experiencing.

Albrechtsen collaborated with Fayyad to get the sound design right. “I got hold of recordings of lo-fi hospital machinery like what was used in the cave,” he said. “I knew that the vibrations and rattles of the walls in the cave would be a big element, and I got hold of some wonderful metallic rattles that I could use for this. I recorded sounds of these stretchers rolling through underground hallways at a hospital in Copenhagen, where I live. I even got some recordings from the streets in Syria while the war was going on. Listening to those authentic recordings felt really scary.”

“The Cave” is filled with the relentless bombings of Russian warplanes. It was a sound that Albrechtsen sourced from Russian colleagues. “It was very important everything felt real. The jet recordings I got from a couple of Russian colleagues,” he said. “The global film sound community is extraordinarily helpful. It’s quite amazing how it’s now possible to get hold of so many unique sound recordings from all around the world.”

In addition to the warplanes and bombs, he had to clean the dialogue for the documentary — a process that took “many, many weeks.”

“Everything is recorded with small camera microphones, and it sounded awful,” he said. “Some of the footage sounded so bad that we needed to clean up the dialogue before the translators could even hear what was being said. But nowadays all this amazing noise reduction software makes it possible to make even very bad recordings work in a cinematic sound mix.”

He added, “We did many foley sounds for footsteps and movements and that also helped make you feel close to the characters. I’m working with an amazing Finnish foley artist called Heikki Kossi. He and I have developed this style for foley for documentaries, where things are recorded a bit bad to make it sound more real.”