The partnership between a film’s production designer and costume designer is an important one. One creates the outfits and the look of the character, the other creates the world that the viewer disappears into. Together, they collaborate to reinforce the visuals of the film. Todd Phillips’ “Joker” is a world where production designer Mark Friedberg and costume designer Mark Bridges’ partnership was pivotal. For Friedberg, he’d been working with Phillips early to find the perfect location for the gritty and grimy Gotham City. New York 2019 is starkly different from the New York of the ’70s, so Friedberg’s search extended to Newark.

The two Marks were inspired by an old car book to form the basis of their color palette. In “Joker” it’s Bridge’s costumes that change to reflect Arthur’s journey and not the production design palette since, as Friedberg explains, “it’s him that changes.”

Friedberg: When I first agreed to do this movie, Todd was still figuring out the region we were in. New York is quite different today to what it was back then.

There’s just not a lot of that part of New York anymore because it’s been spruced, cleaned and scrubbed. There is certainly still that poverty and that’s where we started. Ultimately, we picked our favorite area and started to map the city based on that. In the end, it was Newark that saved us. We were having the hardest time trying to come up with anything that could approximate Times Square. Newark has been the butt of jokes, but it’s a city that is gentrifying. It has this grid in Downtown that we used. By establishing and opening in Gotham Square in Newark, we were able to set a baseline. It’s also where the movie ends. 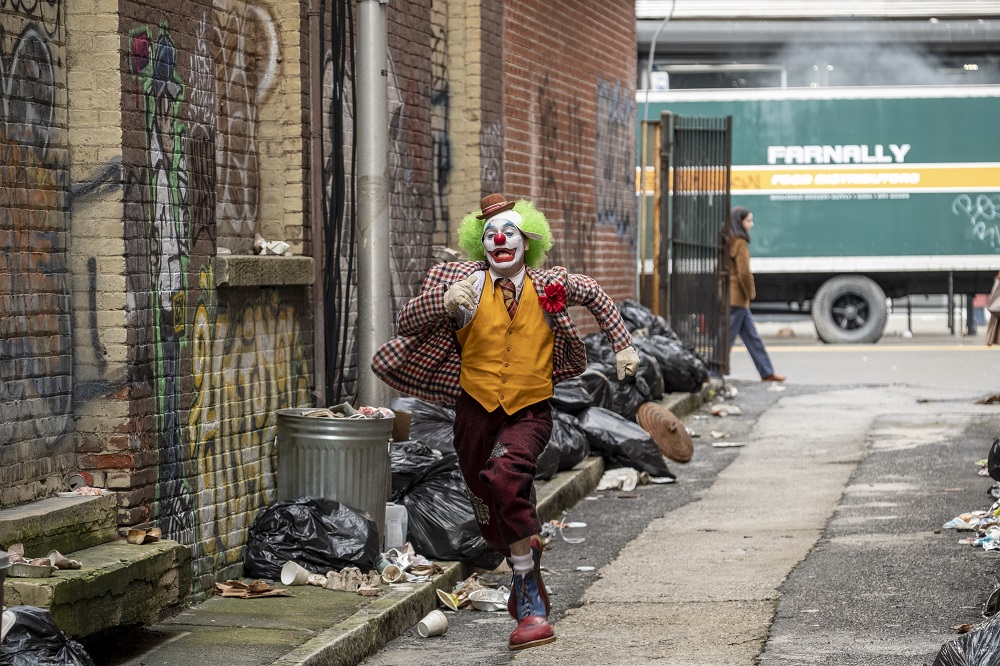 Deciding on the Color Palette:

Bridges: Every piece of clothing we used for Arthur was aged, overdyed and distressed. We wanted the feeling of his clothing to feel like his apartment. I think if they were off-colors, vaguely clashing and used odd color combinations, it would feel right to what Mark was doing with the production design. We looked at a lot of pictures together. I stayed in touch with what they were choosing for the sets with Todd.

We were all in the same building, so it made that collaboration very easy.

Friedberg: I remember that first meeting and I had heard about Mark. I’d been spending a lot of time in my own brain and in Todd’s brain. A lot had happened and I had some thoughts. I had left the color open. We had spent a lot of the time defining the culture of the world that Arthur lived in. What was that city? What wasn’t that city? How did it relate to everything? I had an instinct about color, but I wasn’t quite sure where to take it. The ’70s had its own particular palettes, and everyone has been playing with them in every movie lately.

I showed Mark this book of muscle cars of the ’70s. These strange, weird bronzy greens, golds and oranges. I thought that was the idea of the beginning of the palette, and that was the moment where we bonded. He appreciated that thought. I was thrilled it was something we both appreciated.

Bridges: It was really inspiring and exciting. I thought, “Yes, this is how we need to do it. It was interesting, and you’ve not seen it before.”

Bridges: What we tried to do was have things go a little darker as his mind gets darker. There’s this charcoal grey sweater he wears for the second meeting with the social worker. Suddenly, he’s in this deep scab color knit when he goes to Arkham. It’s as his mind is darkening, there was a bit of a darkening of the clothes, just a bit, but nothing too over the top.

That was the place where we bonded over. We were very anxious over the color of the curtain. I wanted it to be bold and brilliant at the same time, and Mark helped with colors there. That’s where we realized we could take care of each other.

He’s wearing the costume he was wearing in the scene before. It’s the moment the city becomes a clown. As far as the subway design, we wanted the subway to look like they did back then. You can’t see the walls of the subway back then because of the paint and tags.

From a design place, it was very much about that. We spent a lot of time looking for the location to do that. We ultimately found a decrepit one under another subway station way out in Brooklyn.

Bridges: In the script, Todd had written that Arthur had an outdated terracotta suit, but I didn’t feel like terracotta was strong enough. It was a real thing from the ’70s, but it’s a weak color. Also, we had the idea that we’d go from more intense to dark in the colors. I was going to do three different colored suits as his mind changed. I think Todd wanted to go from the dark to the brightest at the end. We start with that maroon suit he wears in the stand-up, and then it turns into a more intense color as it moves on.

The second step didn’t make it into the film, but the third one did. We use the same maroon suit that we see in the stand-up, but we use the gold vest that he had in his clown outfit. We also use a shirt that could have been in his wardrobe and a vest that seemed right. It’s supposed to be things we’ve seen before.

Friedberg: What’s so amazing about what Mark did was that this is stuff that Arthur had the whole time. We’re always curious about whether he’s really a fool or is he brilliant? Does he really have a condition or does he make it up? Is he really miserable or does he think that this is all funny? I love this juxtaposition of this guy who reinvents himself out of things we’ve already seen. 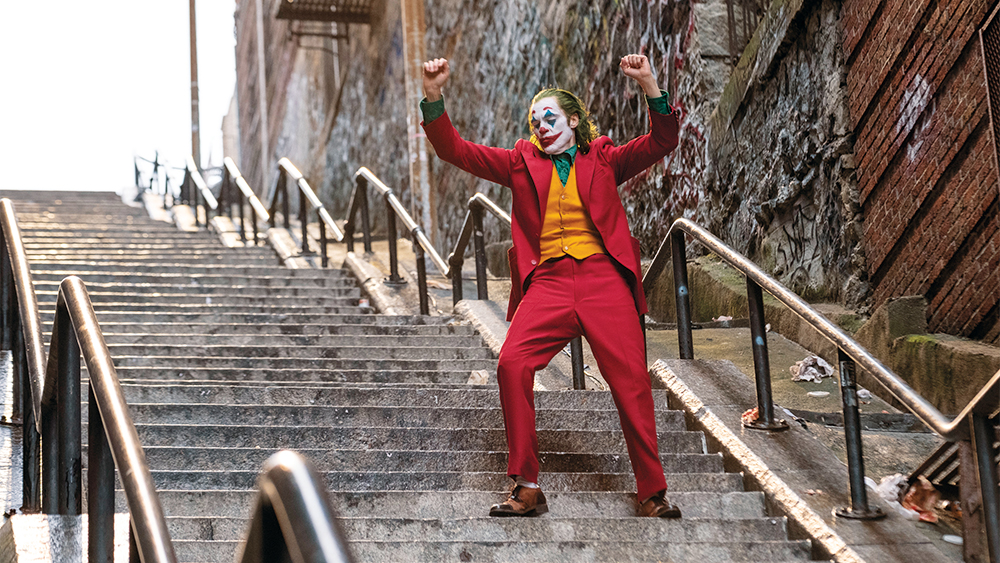 Friedberg: What is a clown agency? That’s really one of my favorite sets. It’s like this tough dude locker room, but it has guys putting on makeup and handing each other guns. What is going on there? Part of the idea is that Arthur belongs to a world that no longer exists or is fading away and that he is a romantic. I guess in a time when people would call for clowns, the world was perhaps a bit more innocent.

We toyed with building that on a stage, but we ended up building it into this road cleaning warehouse on 131st Street on the west edge of Harlem. Todd wanted it to play like the taxi depot in “Taxi Driver” and I wanted it to feel like it was shot by Sidney Lumet.