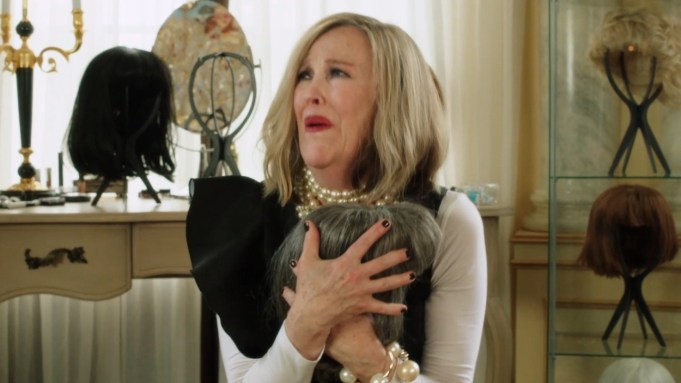 Moira Rose, the family matriarch of cult classic “Schitt’s Creek,” is known for several things: her pronunciation of the word “bebe,” her love for her TV family (and sometimes Alexis) and her countless vibrant wigs. Played by the always delightful Catherine O’Hara, each episode (and wig) is a joy to witness on screen.

“I think when you try on any wig, a wig can make you feel a lot of different feelings and put you in a lot of different moods.” O’Hara told Variety. “We will pick wigs just according to moods Moira is in… Moira gives the wigs personality opposed to the other away around.”

The woman behind Moira’s wig-gallery is hairstylist Ana Sorys, who sat down with O’Hara to breakdown the nuances of wig styling, and the origin of Moira Rose’s iconic lewks.

In celebration, Variety rounded up a few of favorites:

Green is good, this mint-hued wig is one of Sorys’ favorite coifs from the series.

Strawberry blonde forever! Moira wore this wig to one of the Roses’ first ever dinners with the Schitts, just after they moved to Schitt’s Creek.

Bond girl or Bond villain? Moira channels both in this platinum number for the casino trip from Season 5.

Moira’s black bob from season 5 looks fabulous even if the wearer falls asleep.

When your hair matches the condiments and/or tablecloth, you know you’ve struck the right tone.

What better to accompany a chorus practice than a schoolgirl-esque bob.

The new and improved family portrait.

The perfect wig for walking to cafe Tropical.

When a lob becomes a bob on an icon.