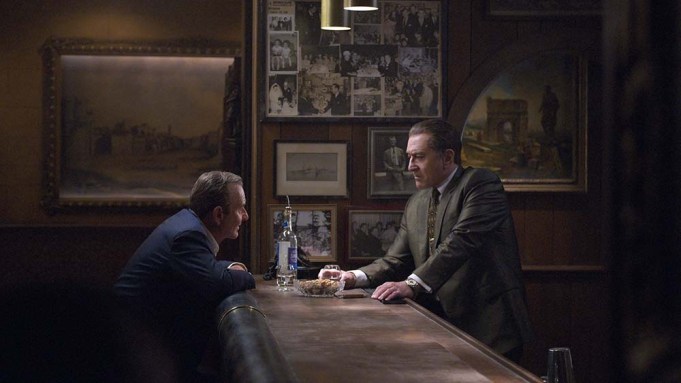 “The scale of the movie is big, but it’s intimate,” Martin Scorsese says in this new behind-the-scenes clip of his new mob drama epic “The Irishman.” The film stars Robert De Niro as Frank Sheeran, a truck driver who meets Russell Buffalino (Joe Pesci) in the 1950s. Sheeran gets involved in the mob and the disappearance of union boss Jimmy Hoffa (Al Pacino).

Aside from bringing together a wealth of names for his cast, Scorsese brings a wealth of detail to his production design. “It goes back and forth in time continuously,” he says.

Production designer Bob Shaw, who previously worked with the director on “Wolf of Wall Street” and “Vinyl,” says of their collaboration, “Research launches everything we do on a film like this.” Scorsese’s instructions for the palette and look of the film were, “This film should look like nothing. It should look like everyday life.”

The film was shot in all five New York boroughs and areas of New Jersey and in over 117 locations. The locations stood in for key Detroit and Philadelphia locations used in the film. It helped that Shaw’s parents were from the area, so he was familiar with a lot of the territories. ”I knew what that looked like and Frank’s house. Even things like the casino, it was down the street from where my aunt lived in Cherry Hill, NJ.”

Aside from the locations, the film used over 20 stage sets. “Marty is a stickler for detail,” Shaw explains. De Niro describes walking onto the set of the restaurant as so real, “it felt like you were in a real restaurant.”

With producer Richard Baratta being a former location manager, he knew how much time Shaw would need to scout locations. A lot of the scouting was about being able to transform sections that weren’t shot on the stage sets. For the Howard Johnson’s, Shaw found a rundown motel with a pool. Shaw and his team resurfaced the concrete and painted the colors to match that of the Howard Johnson chain.

Similarly, Shaw found a lake in Putnam County that was a stand-in for Lake Orion, where Hoffa had a home. Many of the lakeside homes had been turned into mini-mansions, but a few still had their wood fences. That home was used for the scene where Hoffa is on the deck talking on the phone.