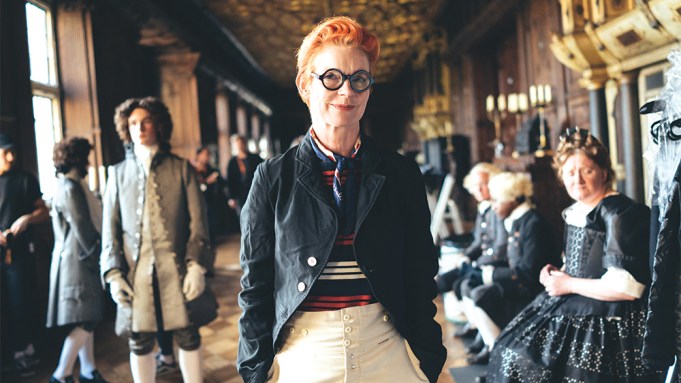 Sandy Powell has done it again: For the third time in her career, she’s doubled up on nominations in the category of costume design, with her nominations this year for “Mary Poppins Returns” and “The Favourite.” But almost equally extraordinary is the fact that she worked on both films concurrently.

“I lived on adrenaline,” says Powell when recalling the heady days of bouncing between 1930s fantasy London (“Poppins”) and 18th century Queen Anne’s court (“Favourite”). “It was incredibly exciting, but keeping them separate in my mind involved a lot of scheduling by my assistants.”

This doubled-up task must have been a little whiplash-inducing; she had a Disney budget but high expectations for a beloved character in “Poppins,” while a more independent budget and a rarely portrayed royal era for “Favourite.”

“I had to figure out how not to disappoint while tackling an iconic character in Mary, while with ‘The Favourite’ the biggest challenge was how to create a court and world of costumes for Queen Anne [Olivia Colman] that hadn’t really been done for many years. There were no costumes I could rent, and we had to do that with limited time and money.”

For “Favourite” that meant using some of the same fabrics that flavored the costumes of fellow nominee Alexandra Byrne (“Mary, Queen of Scots”): denim. Emma Stone’s early maid outfit is made of recycled jeans; later on, Powell saved money by mixing and matching pieces in characters’ outfits. “The women look as if they’re wearing 16 or 17 different costumes, but they’re really made of different components,” she says.

It also helped that “Favourite’s” color palette was limited and largely monochromatic, as well as stripped down. “I was thinking, ‘How can I make an 18th century costume drama different?’ The answer: use a contemporary fabric and pare down the ornamentation,” she says. Everything was cut to a bare silhouette shape, and many fabrics were laser-cut, including the lace.

“The clothes were supposed to look like clothes,” she says, a comment that refers specifically to the queen’s often very casual wear — she’s often shown in a nightgown or robe. “Not someone parading around in a period drama. We wanted them to look like they would smell — as they would have done in that period.”

“Poppins,” fortunately, had more chances to pop — not just with a bigger budget, but because of the fantasy element. “I could have made the family all in brown and beige, but I do love working with color,” she says. That translated into a cobalt blue coat with a busy inner lining for Poppins [Emily Blunt], rather than a nanny’s expected navy blue, for example.

She also could head into fantastical realms, as with the upside-down room of Cousin Topsy (Meryl Streep) and the finale’s pastel balloon sequence. But one truly outstanding look came from a little paint: During a partly animated sequence, costumes were painted in such a way that it was difficult to tell at first that those were not ruffles or folds or decoration at all – just the suggestion of them. “That was a risk that paid off,” she says.

Still, despite Powell’s prowess with two films in the running, there’s no guarantee she’ll triumph over Byrne, or Ruth Carter (“Black Panther”) or Mary Zophres (“The Ballad of Buster Scruggs”), all of whom bring unique visions to the table.

For example, Zophres had to design costumes for a total of six short films that make up “Scruggs,” which effectively meant she had to start over multiple times. Meanwhile, Carter created 1,500 designs for the vibrant world of Wakanda in “Panther.”

Nor are statistics on Powell’s side: Her first double-nominated win in 1999 did net her a first Oscar, for “Shakespeare in Love” (the other film was “Velvet Goldmine”). But her second double-up, for 2015’s “Carol” and “Cinderella,” came up snake-eyes. And then there’s the fact only the name of the films, not the designer, appears on the final ballot.

“I’m supporting both,” she says diplomatically when asked if she has, well … a favorite. “If I wanted to be tactical, I wouldn’t — it’s not particularly beneficial if you want to win. But as they say, it’s great just to be nominated.”

(Pictured above: Sandy Powell on the set of “The Favourite”)