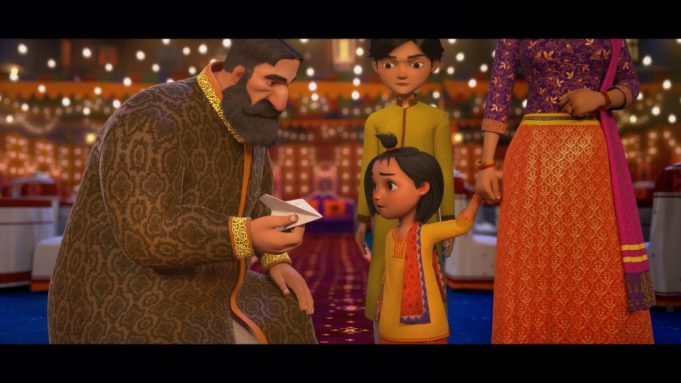 Director Sharmeen Obaid-Chinoy is all about representation and change. When she won an Academy Award in 2016 for her documentary short “A Girl in the River: The Price of Forgiveness,” she was the only female director to be honored that night. Two years prior to that, she became the first director from Pakistan to win an Oscar.

Obaid-Chinoy is back in L.A., this time to talk about her new animated short “Sitara: Let Girls Dream.” The story follows young Pari, a 14-year-old girl who dreams of becoming a pilot, except she can’t — she’s a child bride in Pakistan, about to be married off by her father. “Sitara: Let Girls Dream” is Obaid-Chinoy’s first animated short for a global audience and will be streamed on Netflix in 2020.

“I’ve always wanted to tell this story without any dialogue. I’ve always wanted the music and expressions to drive the story,” Obaid-Chinoy says. Laura Karpman’s powerful score drives the narrative of Pari and her young sister through whose eyes the story is told. Pari’s young sister, Mehr, is the audience, unaware of the rites of passage and centuries of tradition that prevent women from following their dreams.

“I didn’t want it to be black and white. The father thinks what he’s doing is duty. The son does not think that. You see him put his arm around his sister,” Obaid-Chinoy says, a moment of hope in the film for the next generation.

While the animation has sleek production design, splashed in lavish colors, and a soaring score, Obaid-Chinoy explains the reality of her animation studio, Waadi Animations. Pakistan doesn’t have the high-tech rendering machines or software of Pixar or Disney. “Our machines are old,” she explains. “You are beholden to the machines that you use. You are beholden to power cuts that take place for hours on end. You are beholden to machines that often break down.” She adds, “We would often put things on render and come back in the morning and they wouldn’t have rendered.”

Perseverance and passion made the animation team see “Sitara: Let Girls Dream” through to the end. “We don’t have animation schools or universities in Pakistan. And I’m a storyteller. I’m not an animator.” In 2012 the team were from flying blind and watching YouTube tutorials, having Pixar consultants assist over skype in 2012 when Waadi was being set up.  In 2019, the team persevered, driven by their passion to create this feature without dialogue. “It was trial and error,” Obaid-Chinoy says of the filmmaking process. “We created this ourselves, and this is our contribution to the world of animation. It comes from Pakistan.”

Among the people that helped bring “Sitara: Let Girls Dream” to fruition was Darla Anderson, who, while working at Pixar, introduced Obaid-Chinoy to Karpman. It was Karpman who took an interest in composing the score for the animation and ensured that the score was recorded at London’s Abbey Road Studios with a 60-piece orchestra. “As the music came to life, the movie started to soar.”

Obaid-Chinoy reached out to Gucci’s Chime For Change, who have supported it with their impact campaign and helped show the film in over 100 high schools in America. It’s also been shown around the world and in Pakistan where young daughters are still sent off to be married for a dowry. “Everywhere we take the film, there’s an important conversation to be had about why we aren’t investing in the dreams of young girls.”

In addition to Chime For Change, Equality Now has gotten involved, backing the film and raising awareness.

Obaid-Chinoy says the process of bringing “Sitara: Let Girls Dream” to life gives her hope. It’s not just Pari’s story and her young sister’s dream of flying. “It’s about a group of people who persevered against all odds to create this animation.” Obaid-Chinoy also credits executive producers  Ariel Wengroff, Nancy Dubuc, Gloria Steinem, and Imke Fehrmann for making the project happen.

As the credits roll, Obaid-Chinoy encourages viewers to watch closely as a different story is told. The father, having learned his lesson, is teaching his daughter about planes. She graduates, and she becomes a pilot. A girl is allowed to let her dream fly.