‘I Used a Million Crystals’: Inside the Costume and Production Design of ‘Rocketman’ 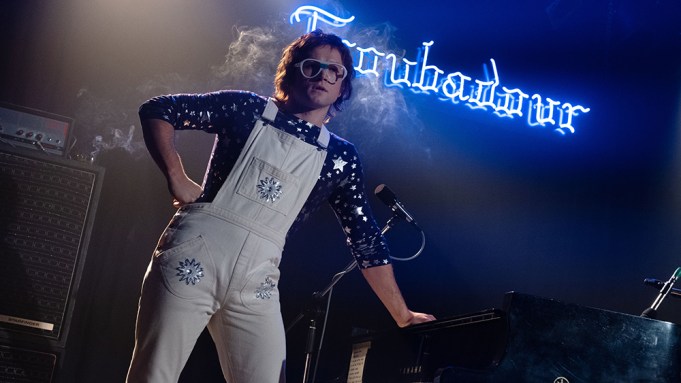 There’s a key scene in Elton John biopic “Rocketman” in which Taron Egerton performs “Crocodile Rock” at L.A.’s iconic Troubadour nightclub. Production designer Marcus Rowland, however, points out that due to budget restrictions, the scene was not shot on-location in L.A., but at reconstructed sets on soundstages in Windsor, U.K., and in West London.

The film charts John’s rise from a young boy from Pinner, England, to the superstar of today. Along the way, “Rocketman” looks at the demons and challenges that plagued his life.

“Rocketman” sees costume designer Julian Day reteam with director Dexter Fletcher (“Bohemian Rhapsody”) to bring the story to life, and it all started with research. Day, who has worked on over 50 films including “Diana,” “In the Heart of the Sea” and “Inferno,” says he got to see John’s famous archives and got up-close and personal with the costumes. “It gives you a sense of fabric, and you got closer to Elton,” Day says. Once he’d seen the archives, Day started with sketches. “I showed [Fletcher] the concept drawings,” Day says. “The challenge to me was to make sure he loved what I was doing.”

Equally as iconic as John’s outfits are is eyeglasses. His collection ranges from oversized to heart-shaped, and they’re in all shapes and forms. He is rumored to have over 20,000 pairs in his collection. “I remade glass,” Day says. “I designed the glasses. I bought glasses, and we got some glasses from Gucci.”

Since the film was not a straight-forward biopic, Day was able to exercise creative license and as the story progresses through the decades, so does the color palette and fabric. Day did, however, get to recreate some of the more lavish and famous costumes worn by John. “I used a million crystals,” he says. Day also sourced the jewelry, including watches from Chopard. “When you’re putting on a watch worth $1 million, it changes your performance,” he says.

Working on smaller sets proved to be an advantage for production designer Marcus Rowland. “We could check out we’re not working against each other, and the color tones work together,” he says of the collaboration between production design and costume design.

The key to the film was ensuring that John would be the focus of each scene.

Rowland breaks down the effects during the scene in which John is at a low point and falls into a swimming pool during a party. “The point he falls into the water, that was on location,” Rowland explains. The rest of the scene was shot in a tank at Pinewood Studios.

When John is faced with a younger version of himself, “the boy was put in digitally afterward,” Rowland chuckles. “When we shot it, he wasn’t wearing the helmet,” Day adds. It was another digital addition during post-production.