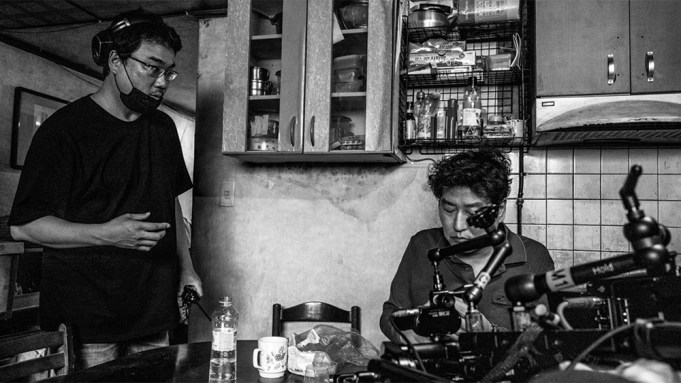 In Neon’s “Parasite,” writer-director Bong Joon Ho creates a rare film in which the audience has no idea where the plot is headed. Bong, who won the Palme d’Or at Cannes and rave reviews for the film, talks about the contributions of his colleagues — without spoiling the plot.

Cinematography, Hong Kyung pyo
On the three characters running in the rain: “It’s only a few minutes of the film, but Kyung and I put the most effort into that sequence when the film temporarily turns into a road movie. These were the only on-location scenes; most of the film was done on sets. The sequence looks like one connected path, but each was shot in a different location in Seoul, very far apart, and on different days. Each shot was complicated — shooting at night with the lighting, and setting up the rain. From a producer’s point of view, it was complicated, but our producer was supportive. Kyung and I love to shoot in the rain. But it wasn’t just about visual aesthetics; it was tied to the overall theme. In the film, everything is aligned vertically. Water only flows from top to bottom, from rich neighborhoods to poor ones, and it never flows the other way.”

Production design, Lee Ha jun
“The impoverished neighborhood was entirely created. We built it in a big water tank, for the rain scenes. As research, we looked at slum neighborhoods that were scheduled to be demolished. We took photos and visited empty houses. They were mainly abandoned, but there were still traces of lives there. It helped the production designer in a practical sense. We asked the development committee for permission to remove doors, windows and objects, and we used them on the set. For the Park house, we took an empty lot in the countryside and built the first floor and garden, both interior and exterior, like an actual house. When you see the second-floor exterior shots, that was added digitally. The basement and the interiors of the second floor were built on a soundstage; we connected them to the main floor through visual effects. You wouldn’t think it, but there are more than 400 visual effects shots in the film, connecting the rooms and sometimes the people.”

Editing, Yang Jinmo
“Jin had worked with me on ‘Okja’ and ‘Snowpiercer’; he’s used to the way the tone and atmosphere change in my films. I always feel bad for my editors because I don’t shoot a lot of coverage. But of course, there are creative decisions in the editing process. One of Jin’s strengths is his broad understanding of visual effects and the entire post-production workflow. The actors’ performances are different for each take. If the dad, mom and son are in the same frame, the dad might be best in the third take; for mom, maybe the fifth. The editor will use visual effects to combine those two takes. It’s difficult to notice, even for the actors, but it works.”

Music, Jung Jaeil
“I really like the simultaneous progression of two layers of music. For the birthday party near the end, it starts with a yodel song — very happy, but there is also dark, ambient music behind that, which gets stronger. The dark music expresses one character’s humiliation and despair, and it gets louder. When the poor family gets together in the house, about halfway through the movie, I told Jae: ‘The halfway point is when the audience usually checks their phones for messages, and I can’t let that happen. I need to keep their attention.’ So he offered a track of a marching band. This was a risky choice, because composers usually like a musical flow. Also, we kept making adjustments to the ‘belt of trust’ sequence. We worked on the music a lot because it’s a meticulous baroque score, and it’s more than eight minutes long. Each ebb and flow had to fit with the timing of the visuals.”

Sound supervisor, Choi Tae young
“I try as much as possible to use on-set recording to capture the actors’ subtle nuances. The sound designer, Tae, is the only person who’s been with me on all seven films. In the film, there is a gap between rich and poor, even in terms of sound. In the rich neighborhood, the ambience is very quiet, and in the poor neighborhood, you hear many layers of background noise from the streets. This is not a blockbuster spectacle, but we mixed in Dolby Atmos; I think because of that, the silence pops out more.”