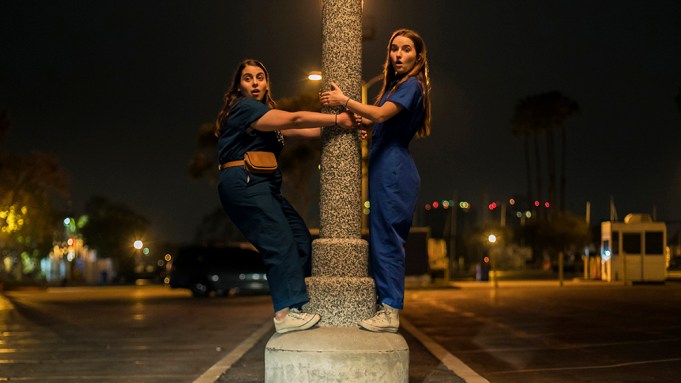 Olivia Wilde’s directorial debut, “Booksmart” starring Kaitlyn Dever and Beanie Feldstein, is, at its core, a film about friendship and self-discovery.

Dever and Feldstein play best friends Amy and Molly, who are about to graduate from high school. Their crowning achievement is that they’ve gotten accepted to the best colleges in the country. Then they learn that their classmates who partied their way through high school also got admitted to top universities. With one day left before they graduate, Amy and Molly make it their mission to attend at least one party.

When they finally make it to the house party, after many misadventures, Wilde takes a big directorial risk in the film.

“It’s a tonal shift,” Wilde explains about the movie switching from a broad comedy to more of a drama, during an emotional interaction between its leads. Amy sees her crush, Ryan (Victoria Ruesga), kissing someone else, Nick (Mason Gooding).

It’s also the first time Amy becomes separated from Molly. “It was a great opportunity to isolate Amy,” says Wilde of the co-dependent friendship.

As Amy discovers Nick and her crush Ryan together, Wilde switches to a long take, following Amy from the pool into the house as she tries to find Molly.

Wilde breaks down the scene and describes how stripping sound allowed the audience to project their own personal experiences into Molly and Amy’s space and argument.

Amy and the Pool Scene:

That is what the experience of adolescence was like for me. One moment it’s extreme laughter and happiness, the next is this moment of extreme pain and confusion. That is my emotional memory of my teenage years. It happens throughout your life, but there is an intensity and heightened emotions. I really wanted to go for it and not allow ourselves to make jokes for a bit. I really wanted to take advantage of this incredible talent that we have on the screen. They’re so versatile, and they’re so capable of dramatic realism and emotional depth as well as hilarious laughs and comedy.

I had dreams about how we’d shoot it and every bit you see was a risk in a way in a movie like this. I’m grateful because there are studios that wouldn’t let me execute this sequence the way that I wanted to. When you see it finished, it works. But when prepping and you’re describing it, people get nervous.

Originally, in the script, Amy jumps in the pool and is devastated to see Ryan with Nick. I thought, “What if Amy in the pool is an opportunity to isolate her in the way we’ve had to isolate Molly with the dance fantasy sequence?”

I wanted Amy to have a similar moment, although this was happening in reality, and Molly’s was a fantasy sequence. I wanted to go into her internal world and I wanted to set her free. The swimming was a chance for her to fly, so we shot it in that way.

That moment is so much more than her just looking for her crush. It’s about realizing how happy she is. It was important that we had the beats throughout the pool scene that could lead to the fight scene. By the time you are in the middle of that argument, you are carrying all of those emotional steps that Amy has taken. Therefore, it would have a real emotional impact. Often times, in the language of film, we skip steps in the name of efficiency, we can rob ourselves of an emotional impact.

The momentum builds really fast. Now, I ask the viewer to slow down and as she exits the pool, it’s this one shot.

I was dead set on it being on Steadicam shot. I wanted to trigger that memory we all have of really needing to find a friend and really experiencing that shift in an environment. It shifts from something that feels really positive and optimistic to sinister and threatening. That’s a magical thing. Our original state transforms our environment. The girls finally get to Oz and based on what Amy has experienced and learned in the pool, and her shame.

She’s devastated on behalf of Molly in regard to Nick. She finds this environment threatening. I stayed in that single shot and allowed it to become almost too much. The anxiety is allowed to grow and when she finds Molly, you realize they’re on completely different pages. I think once you see that Molly is in this bubbly, optimistic mood, you realize it will not end well.

To me, it’s interesting to stage an argument where everyone is right and no one is wrong. It’s not a battle between right and wrong. They’re on different pages and so often, that is what causes our greatest conflicts with the people we love the most. If we were just able to look back at the 10 minutes of someone’s life, we might be able to realize why they’re acting this way.

You can acknowledge that Amy doesn’t use the one tool that could decimate Molly. She could say throughout that entire argument that Nick is in the pool with Ryan. She doesn’t do it. What I found the most interesting was seeing Kaitlyn Dever not say those words.

Restraint is the most fascinating thing to watch. It’s more interesting watching someone not cry than to cry. I think in this argument, watching Amy not say those words is really interesting to me. To see how Molly is getting panicked out of fear — it’s clear she fears abandonment. Slowly, you see that fear transferring into this rage.

It was a risk to stay in that shot and not intercut between them. I really wanted the audience to see the way these arguments happen. They lose the ability to see and hear each other. You’re seeing that in real-time. We’re not cutting it up for you, and we’re not presenting one side of the argument for you.

It was a real choice in editing. You are inherently presenting an argument when you edit. When you are shooting an actual argument scene, I think it’s interesting to say, “OK audience, you make the decision for yourself.”

I didn’t know I was going to strip the sound until I was editing. I was watching it and I realized their performances were so good that at a certain point, you don’t need to hear what they’re saying because the argument itself has completely spiraled out of control.

We’ve all experienced that. You’re spinning out of control and saying hurtful things. You’re treading water desperately trying not to drown. I thought if we cut the sound out, the audience can project their worst arguments onto this. I think it created more of an emotional impact to allow for people to not focus on the specificity of the argument and embrace that universal experience of deep sadness.

To make matters worse, they’re in a public space. Throughout the development of the film, I thought we have to acknowledge that young people live in a world full of social media. Their adolescent experience is defined by it. I didn’t want to timestamp the film with social media throughout it. “Eighth Grade” did it superbly. I didn’t want “Booksmart” to try to execute that same argument because Bo Burnham did it so well. I thought if we use it in a limited sense, only when it becomes the most useful or the most devastating.

So it’s the most useful when they’re experiencing fear of missing out and they’re trying to figure out where this party is. It’s devastating when the argument is being witnessed. I had the actors in the background turn the flash on their phones so we could bloom out the light to create that beautiful effect. It was another way to let the audience go on the journey with them in real-time. Some of those phones were filming. I was going to cut to what the phones were filming, but when I saw the footage we had, I just didn’t want to cut away at all.