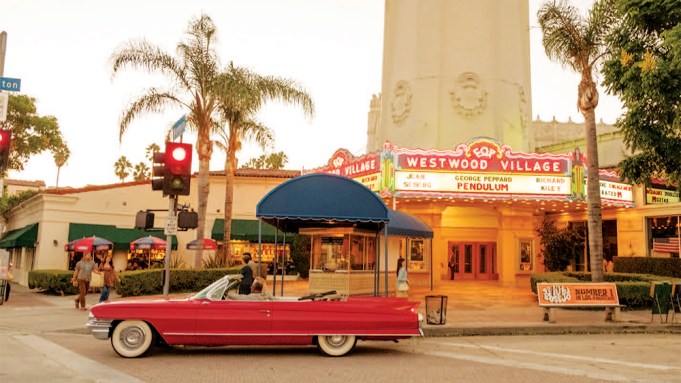 Quentin Tarantino’s “Once Upon a Time in Hollywood” is the ultimate love letter to that period of Los Angeles. The year was 1969, and things were changing, to say the least. Tarantino’s latest stars Brad Pitt and Leonardo DiCaprio as Cliff Booth and Rick Dalton, respectively. Booth is a stunt double who drives Dalton, a TV actor, around town from job to job.

Dalton is neighbors with Sharon Tate (Margot Robbie). From costume designer Arianne Phillips’ ensembles to Barbara Ling’s production design, the audience is catapulted from 2019 to Hollywood 1969, and the end of the golden age. “It was an absolute complete transformation from the L.A. that I knew,” DiCaprio says in an exclusive featurette.

Tarantino did not use a greenscreen to recreate the magic of that era. He wanted to work with someone who was born in L.A. and knew what that period looked like. “He wanted someone who could speak his language,” says producer David Heyman.

In the featurette, DiCaprio, Pitt, Tarantino and Robbie talk about what it was like being immersed in a movie in which the detail was so meticulous. Ling breaks down the sets the film uses, from Dalton’s home to Cliff’s trailer. They also touch on how Western sets at Universal Studios were used for the TV show portrayed in the film. “We redid the streets and brought it back to the glory days of Westerns,” says Ling.

Tarantino says they replaced the neon and spruced the existing signs that existed. “We were able to let the lights blink again on Hollywood Boulevard,” he says of the work Ling did to transport the audience back in time.