Inside the Making of the Costumes of ‘Jojo Rabbit’ (EXCLUSIVE VIDEO) 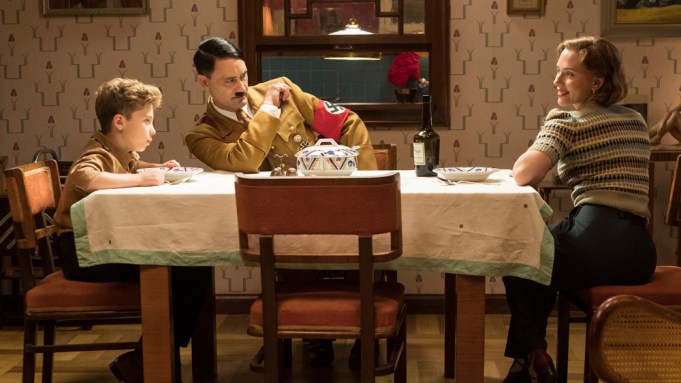 The world of “Jojo Rabbit” is one that is seen through the eyes of a 10-year-old boy. His world is World War II Germany and his imaginary best friend is Hitler. Jojo dreams and aspires to be the greatest soldier and join the Nazis.

Taika Waititi’s anti-hate satire builds a world filled with vibrant colors and where “everything is lucid and vivid,” Waititi says in an exclusive featurette (watch above). Costume designer Mayes C. Rubeo, who previously collaborated with Waititi on “Thor: Ragnarok,” says, “You see the metamorphosis of this boy.” Waititi’s Hitler uniform is big and baggy “riding pants” and brown. The idea for him was that he was a fantasy character, a figment of Jojo’s imagination.

Scarlett Johansson, who plays Jojo’s mother, Rose, is “someone who likes to go out and socialize,” so naturally, her outfits are chic. She’s Jojo’s world, and the heart of the movie. “She is color and life and the most colorful,” says Rubeo. “We wanted to portray that.”

The colors in the movie start at a happy place. As the story develops and Jojo’s world starts to change, however, challenging his ideologies, so does the color palette around him. Rose is the only one whose colors don’t change.