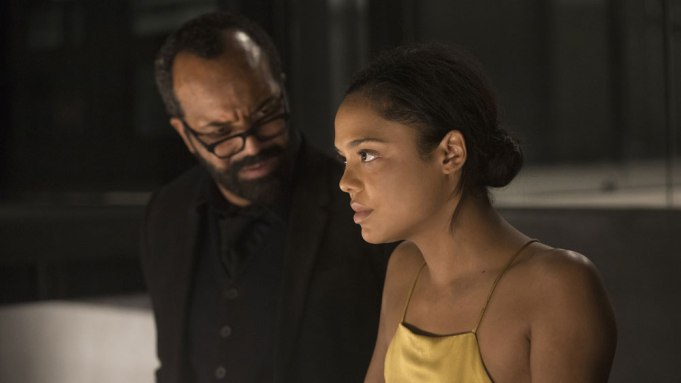 Like any self-respecting piece of tech, “Westworld” is always trying to upgrade itself. The good news is, several glitches and structural issues have been corrected and modestly improved in “Westworld 2.0.” The operating system is smoother, but the drama’s most insistent claim — or aspiration — is that it has achieved full sentience, or at least a modicum of arresting originality.

That remains to be seen. Like an AI that hasn’t quite mastered the messy, glorious, contradictory qualities necessary to being human, this drama’s reach has consistently exceeded its grasp on a thematic and emotional level. “Westworld” is actually at its best when it is less intent on importance and attempts to simply entertain. It’s essentially an action-adventure serial, and few shows on TV look as spectacular: A ragtag band of rebels galloping across a Western plain is a glorious sight, and other set-pieces are elegantly and efficiently rendered as well.

On a story level, however, it has a tendency to take on too much and hint too broadly at solutions to puzzles that don’t seem worth the effort it takes to solve them. Jimmi Simpson and Ed Harris are spellbinding performers, but the transformation of William into the Man in Black, which is clearly meant to be a key foundational journey, has derivative elements and is only intermittently interesting (though a subplot involving guest star Peter Mullan is often sensational).

All that said, TV fans who enjoy excellent performances woven into sci-fi pastiches executed on a visually ambitious scale are likely to continue to find “Westworld” quite watchable. It’s not the cutting-edge hybrid it plainly wants to be, at least not yet, in part because it still wanders between stolid romanticism and cynical (and very familiar) observations about memory, power and technology. If some of the characters and story elements serve perfunctory purposes, the show’s attempts to build and explore a lushly dystopian mythology improve on the convoluted efforts of the first season.

If not a cutting-edge hybrid, it is still a mix, of course: If you squint at certain moments, you can almost see the gates of Mordor or pennants waving over Winterfell. Even more than it was in its first season, “Westworld” is a fairly credible (and expensive) approximation of “Game of Thrones,” with bits and pieces of “Lord of the Rings,” “Terminator” and “Star Wars” thrown (throne?) in for good measure. The upgrades a few robotic hosts have received have more or less turned them into mystically powerful Jedi warriors, and in one case, a host has evolved into a “witch” (one episode depicts what amounts to Galadriel in Edo period Japan, which is a pretty cool idea for an hour of TV).

Scattered throughout Season 2’s arcs — which at times play as if a curious robot with pretty good taste was taking a random-access spin through genre history — are a number of good and great performances. Jeffrey Wright gives real pathos and poetry to the predicament of Bernard, whose memory has been fractured in ways that make his quest to survive difficult. In Evan Rachel Wood and Thandie Newton, “Westworld” has two mesmerizing female leads who can find multiple levels and psychological resonance in every line and gesture. (That said, both have been saddled with fairly boring significant others; “Westworld” has not yet found a central romance that works.)

Everywhere the humans and hosts go, they must step over the corpses of customers of the Westworld park (which will presumably be issuing refunds, if not facing many lawsuits). Hosts who were programmed to keep the vacationers happy are also dying by the score. As the second season begins in lumbering fashion — if you can get up to speed without repeatedly referring to the program’s Wikipedia page, you are probably a robot — the hosts have gone on a killing spree and wrought massive destruction on various Westworld locales. This is a feature, not a bug: “Westworld” has taken its overall bombast level down a couple notches, but it’s still good at depicting bloody clashes.

How ironic, then, that one of the drama’s most winning conflicts is verbal, and takes place between a showrunner and a performer. On-screen, that is. Newton’s character, former sex worker Maeve, is often paired up in Season 2 with Lee Sizemore (Simon Quarterman), story architect of the various Westworld adventures. In a show filled with earnest but conflicting meta-narratives, the dialogue between Maeve and Lee provides opportunities for “Westworld” to engage with the tropes of TV — which it by no means fully avoids — but also with its critics. Maeve dismisses the creator as a hack who can’t write women. He fires back that she doesn’t know how hard it is to create so many wide-ranging stories for tough corporate taskmasters.

Sizemore, a huge irritant in Season 1, is now reckoning with his own mistakes, and is willing to take notes from Maeve, who, at one point, makes him strip down until he’s utterly nude. (If this isn’t conscious payback for the male gaze aspects of the first season, I’ll eat my Stetson.) “Westworld” still has representation issues — the writers’ affection for colonial fantasies designed for white people is highly questionable, and the drama could do much more to deepen its portrayals of indigenous people and South Asian characters.

But the first half of this season — the Man in Black’s repetitive quest aside — largely tells the story of a black man, a black woman and a white woman seizing power from their oppressors. Whatever else may still need an upgrade, that take on the future certainly has its appeal.