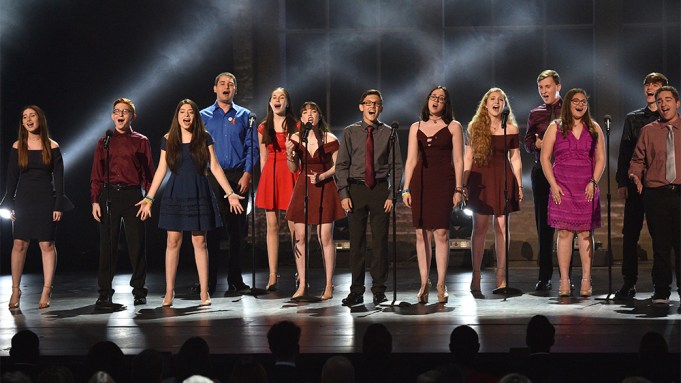 This year’s Tony Awards seemed to address the times in which we live with a certain amount of urgency, as all awards shows have done over the course of the Trump era. But give the theater types this: They did their job with a surprising amount of subtlety, with a show that assuaged the wounds of a uniquely divisive time with a whisper, even though we knew they could carry off a belt.

Consider the studiously low-fi opening number, in which hosts Josh Groban and Sara Bareilles dedicated their time to those who wouldn’t win—as, after all, neither of them had ever won a major award themselves. It was a gesture out of step with the general Tony tone; even leaving aside last year’s particularly strange opening, during which host Kevin Spacey elaborately joked about rumors around his sexuality during a big production number, many recent Tony openings (with repeat hosts like Neil Patrick Harris and Hugh Jackman) have centered on quite how big theater can be. Elaborate productions cast a spotlight on the breadth of Broadway, bringing together the casts of top shows, including likely winners. This year, the production was framed around less-heralded performers, concluding with unknown members of nominated shows’ ensembles taking the stage.

It was a statement, an indication of the show’s purpose. If recent awards shows have struggled with how to address our moment — as were this year’s Oscar and Grammy ceremonies, whose productions inserted brief bits of political comedy into shows that largely felt focused elsewhere, and perhaps out of step with tensions in their audiences as a result—the Tonys found a way forward. Though there were odd time-saving choices with which anyone could quibble (cutting off the Best Play winner but keeping the whole performance from “Summer,” not even a Best Musical nominee, or the lengthy Bruce Springsteen performance?), the mood struck by the show’s hosts was amiably low-key. Indeed, they bridged the gaps left for them by the production; forced to perform a seemingly hacked-together medley of songs associated with lifetime-achievement award winners Andrew Lloyd Webber and Chita Rivera (an unnatural fit), the pair seemed almost virtuosically sympathetic, making what might have been a snub for both Webber and Rivera into a too-short moment of celebration. Throughout, Groban and Bareilles kept up this happily effervescent, optimistic but never cloying energy — up until the show’s end, when they reprised their opening number as a call to arms for all who work in the theater, or hope to. It was a sweet debut performance by hosts who may well be back at Radio City next June, should the Tonys be so lucky.

The fact that the production chosen to spotlight some presenters with photos of them as young theater kids sparked concerns that a certain kind of hyper-theatrical argot might take over the proceedings. But instead, reminders of why those who love theater do (and for how long they’ve done so) seemed to provide an organizing energy for thoughtful speeches that reached out to viewers as lovingly as did the hosts’ introduction. (Of course, there was some pure vitriol, as in Robert De Niro’s muted outburst about Trump, but most speech viewers heard was more carefully chosen.)

Some speeches resonated for the power of the personal: Nathan Lane, accepting a prize for his role in “Angels in America,” described a conscious choice he’d made eight years prior to take on more complex and challenging roles, with forethought and time that’s too often absent from Oscar and Emmy speeches. But more often, they straddled the worlds of the individual and of politics, as in two speeches early in the night during which winners (“Carousel’s” Lindsay Mendez and “The Band’s Visit’s” Ari’el Stachel) addressed pressures they’d faced in their careers and their lives to keep their ethnicities under wraps, and their pride in their heritage and accomplishments today. And Glenda Jackson, an undisputed legend, struck a blow as only a perfectly composed elder-stateswoman can, thanking New York audiences for their hospitality to attendees of all ethnicities and adding, “America has never needed that more. But then, America is always great.”

Those moments in which politics were most explicitly addressed were done so, still, with a deft touch: A performance by the high-school drama students of Parkland High School, of a standard from “Rent,” was carried across with less cant than sheer joy in performing. That the song choice was sweetly, goofily sentimental was the point — the Tonys were unafraid to be exuberant even as they sought to make their points. (Accepting a prize for best revival of a play, Tony Kushner lived out that duality most clearly, noting the upcoming date of the midterm elections as well as the current date — Judy Garland’s birthday.)

It was a show defined in large part, of course, by its winners, but one whose claims of sympathy with the losers felt genuine, too. Even as the production numbers may have been smaller than in years prior, the show’s heart was big beyond measure.