TV Review: ‘Sorry for Your Loss’ on Facebook Watch 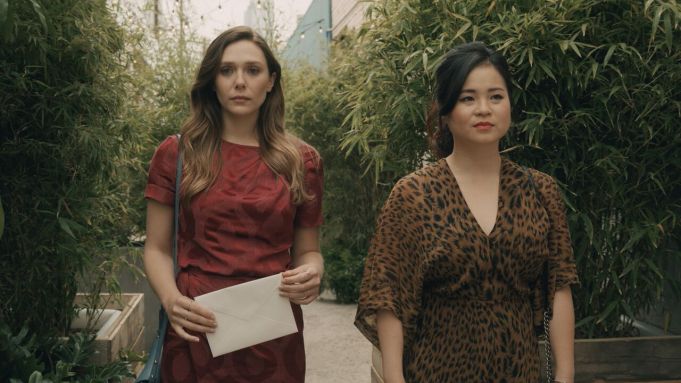 Leigh (Elizabeth Olsen) is a walking bruise. Three months after her husband died suddenly, she’s only getting darker and more wicked the longer her grief stretches on. Every time it seems like it might finally be fading, someone’s cloying sympathy or misplaced word inevitably jolts her back into feeling the full brunt of her pain all over again.

So, no, Leigh isn’t exactly the most fun character to follow around, as “Sorry For Your Loss” asks us to do. As she acknowledges with a snarl in her grief support group, she’s angry, sour, and quick to snap at people trying to help, most especially her newly sober sister Jules (Kelly Marie Tran) and would-be yoga mogul mother (Janet McTeer). But with the help of some sharp writing, charismatic supporting characters, and Olsen’s slyly sympathetic performance, Kit Steinkellner’s drama finds a way to portray the reality of grief without letting it overwhelm the show entirely.

As Leigh struggles to move on from her husband’s death, “Sorry For Your Loss” cuts between her present day misery and her past joy in order to convey exactly what she — and everyone else who knew him — lost. The difference between the two time periods is stark, with the present washed out in cool blues while the more vibrant past warms up the screen.

According to Jules, Matt (Mamoudou Athie) was “the glue that held [them] all together.” He helped the far more rigid Leigh to relax a little, inspired Jules to cut back on her self-destructive partying, and tried to help his wayward brother Danny (Jovan Adepo) get his life together. Leigh mostly remembers him as the shy and sensitive counterpart to her own type A efficiency. But the more she reflects on their life together, the more she realizes that she didn’t know or understand him as much as she thought — though in fairness, she thought she’d have many more years with him to try.

Olsen anchors the show by nailing a particularly tricky performance, given that she isn’t exactly an immediately sympathetic character despite what she’s going through. (In one particularly rough moment, Leigh rejects a chipper young widow’s attempts to reach out by sneering that she, a “Courtney Love,” could never be friends with a “Jackie O.”) But Olsen makes Leigh’s pain palpable enough that it’s always obvious when she’s lashing out — and more importantly, why.

Helping Olsen round out the story are a pair of particularly strong performances that ground Leigh’s past and present. As Matt, Athie faces the tall task of shading in a character almost entirely seen through Leigh, Jules, and Danny’s perspectives (not to mention making it clear why he was so beloved). But he’s more than up to the challenge, even imbuing Matt with a sly mischievous streak that keeps him from becoming too saintly in retrospect. And as Jules, Tran taps into her character’s intrinsic empathy as she did so well in “Star Wars: The Last Jedi,” making her the bubbly and determined foil to Leigh’s dour pragmatism. At least in the first few episodes, we don’t get to see the Jules that apparently made everyone’s lives hell; hopefully that will change, if only to give Tran more and different material to chew on.

Just like Leigh, “Sorry For Your Loss” isn’t exactly in a hurry to resolve anything right away. The first four episodes don’t move with much urgency in an effort to keep things realistic, which can be frustrating, but that’s by design. The entire point of the show is that grief can fade, but it never truly goes away. That makes it a tough concept to hinge a series on, and yet the show draws viewers in for its patience, tenderness, and refusal to gloss over the least flattering (and most fascinating) parts of grief.