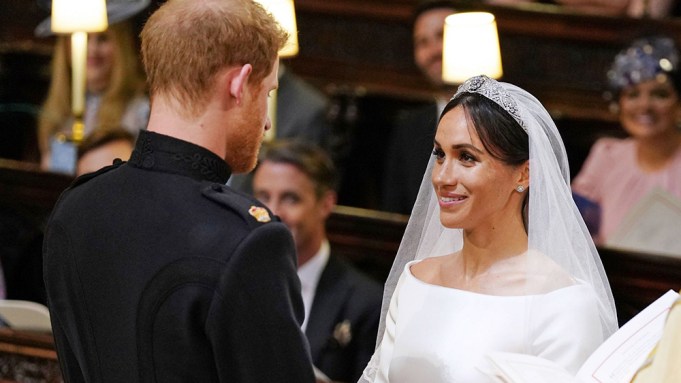 On a gloriously sunny day, an American actress became the first Duchess of Sussex and the wife of a Prince of England.

The couple managed to infuse their own style in the ceremony steeped in centuries of tradition, without bucking the importance of convention.

As the world, including her groom and his best man, waited for the bride, sweet moments were exchanged between the brothers. It didn’t matter that no one could hear the exact words — older brother William was clearly calming wedding jitters.

Markle was a vision in an exquisitely cut and minimalist gown by Givenchy’s creative director Clare Waight Keller with a very long train. The prince’s expression changed from worry to joy as she neared.

Her mother, Doria Loyce Ragland, fought tears. Yes, her daughter was marrying into the royal family and in a fairytale setting, but she sat alone — the bride’s only blood relative among 600 guests. Her father made some missteps last week by posing for tabloids, but then quickly bowed out of the event citing health problems.

And what a wedding. It was a perfect blending of centuries of tradition that guides the British monarchy with the new world of a scrappy actress, the biracial, divorced daughter of a yoga teacher and lighting director.

The new couple stamped their own personal style on it.

The Most Reverend Michael Bruce Curry, the 27th Presiding Bishop and Primate of The Episcopal Church, gave the address, likely one that had never been heard inside these hallowed halls.

The Episcopal Church’s first African-American leader and a passionate speaker, Curry quoted Dr. Martin Luther King: “We must discover the power of love, the redemptive power of love, and when we do that we will make of this whole world a new world of love. Love is the only way. There is power in love.”

“Two young people fell in love and we all showed up,” Curry said.

Curry also brought up slaves in America and how the power of love is a balm no matter how awful the situation. His rousing sermon had the couple listening intently. He did try to get some audience participation, but this crowd seemed less interactive than those he may usually preach to.

After songs, including “Stand by Me” during which the bride and groom shared a few smiles, they took their vows and Markle placed a ring on Harry’s finger. This, too, is another indication of how the couple put their own stamp on the ceremony: He is the first male royal to wear a wedding band. Wedding rings were not popular among men in the U.K. before World War II.

As guests were signing the registry, a cellist who shot to fame on “Britain’s Got Talent,” Sheku Kaneh-Mason, played. Only 19, he won the BBC Young Musician of the Year award in 2016, and was the first person of color to win the honor.

The couple left the church, shared their first kiss before the public, and managed to get into the open horse-drawn carriage flawlessly as crowds cheered and Princess Charlotte waved from the steps.

The Duchess of Sussex has perfected her own wave as well. As stuffy as the British royal family can be, there was still more of laidback feeling to this wedding than others that have drawn such worldwide attention.

The dress itself was telling. Not just that in its exquisite simplicity and expected princess glamour, but that it was a tightly kept secret, even among Markle’s close cadre of friends. Honoring that secret, inviting so many people instrumental in their charities, ensuring representation of people of color in the ceremony, and how Markle chose to walk down the aisle are all clear indications of who this very modern royal couple is.

The essence of composure, Markle walked herself part of the way down aisle then met up with her now father-in-law, Prince Charles, who escorted her the rest of the way. He purposefully did not give her away.

Even with a staff dedicated to preparing this wedding, Markle did not lose sight of whose wedding it truly is. When she and her mother did a final check of the church Friday, she found the floral arrangements wanting and asked for more foliage. The chapel was festooned with locally sourced beech and birch branches, lilies of the valley and foxgloves. Princess Diana’s favorite white roses and Markle’s favorite peonies were the most prominent flowers. Philippa Craddock, a London florist, supplied the arrangements.

Requesting the floral tweak might not strike most as a big deal, but it reveals two striking elements: Markle asserted her authority and she knew how it would play on camera.

Most of the dresses were conservative in a rainbow of colors and floral patterns. Men, for the most part, stuck to traditional morning coats, the black cutaway with tails, a vest and gray slacks, though some men, notably George Clooney, opted for a pearl gray suit.

His wife, Amal, wore a deep yellow dress with a stunning saucer hat trimmed with a veil. They arrived at the same time as David and Victoria Beckham, who looked in danger of cracking a smile.

Prince Harry, however, is known for flashing an easy grin. Only 12 when his mother, Princess Diana, was killed in a car crash, he has long been forgiven trespasses that would have sunk others. The prince’s genuine interest in people, caring for children and picking up on his mother’s charities has long endeared him to people as has his military service.

Millions watched worldwide, while an estimated 100,000 people, many of whom had gathered overnight, lined the streets, waving the Union Jack and cheering, four deep on the grass, orderly behind barriers. Windsor is roughly 20 miles west of London and near Eaton, where Princes Harry and Will to school.

The couple, who announced their engagement Nov. 27, will now be known as the Duke and Duchess of Sussex — a happy ending fit for Hollywood.