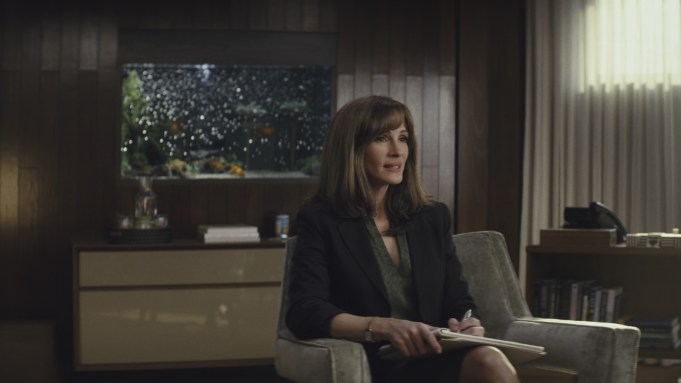 At first glance, “Homecoming” seems to be a cocktail of buzzwords. Take one part transmedia origin story (“based on the popular Gimlet Media podcast…”), add one part movie star trying her hand at television (Julia Roberts), mix well with an established TV auteur (“Mr. Robot” creator Sam Esmail), and serve. In practice, however, those ostensibly disparate elements come together to make sharp slices of truly eerie drama. Even when it gets a little too mesmerized by its own stylistic trickery, it’s hard not to get sucked in by “Homecoming’s” haunting mission creep.

The new Amazon series from podcast creators Micah Bloomberg and Eli Horowitz follows the shady practices of a mysterious center that advertises itself as a resource for helping combat veterans assimilate to civilian life. Counselor Heidi Bergman (Roberts) appears to have a genuine interest in helping her patients, most especially amiable newcomer Walter Cruz (Stephan James). But much to her frustration and growing alarm, she constantly has to justify treating them like actual people instead of lab rats to her impatient boss Colin (Bobby Cannavale, cannily weaponizing his signature smirk), who’s convinced he can mine valuable data from the depths of their trauma.

Structurally, “Homecoming” follows the audio drama’s lead. Most of the action takes place in or around the Homecoming center, while a parallel mystery unfolds in a future timeline where the program hasn’t just collapsed, but looks to have disappeared altogether. As a suspicious Department of Defense employee (Shea Whigham) digs into its history, he confronts Heidi, who’s now working as a waitress at a diner and insisting she knows nothing. Intrigue ensues.

The podcast relied on Heidi’s session recordings and phone calls in order to keep the story together, but bringing it to television necessitated giving it a distinct visual language. Esmail and his team, many of whom are alums of “Mr. Robot,” tackle the challenge with clear enthusiasm and meticulous design. Esmail, who directs every episode, uses his signature long takes and off-center framing shots to disquieting effect, adding Hitchcockian angles and close-ups to emphasize the story’s inching horror.

As with “Mr. Robot,” Esmail’s inclination to pull every directing trick out of his hat can become overwhelming. But with each episode limited to a half -hour — a welcome subversion of streaming series’ increasingly bloated run -times — there’s simply less room for superfluous indulgence.

It helps, too, that the cast is solid enough to keep the show feeling grounded in reality. James is excellent, especially when Walter’s steadfast determination to just go with the flow gets complicated by his old friend Schrier (Jeremy Allen White) insisting that something about Homecoming is seriously off. Dermot Mulroney and Sissy Spacek don’t get quite as much material as Heidi’s clingy boyfriend and skeptical mother, but each makes a meals out of every morsel they get.

Roberts, for her part, turns in a much more understated performance than one might expect of her first big TV role. Yet her intrinsic warmth nonetheless imbues Heidi with a palpable protective streak that keeps the character from feeling as obscured by all the mysterious forces surrounding her as she very easily could.

With a detailed road map in its source material, a deep bench of talent in its cast, and a director making specific choices to heighten the sinister vibe, “Homecoming” has far more going for it than not. The question becomes whether it can tie together its multiplying mysteries by season’s end without getting too enamored of its own daring.