‘The Bachelorette’ Recap: Becca Kufrin Takes the Two-on-One Date Into the Desert 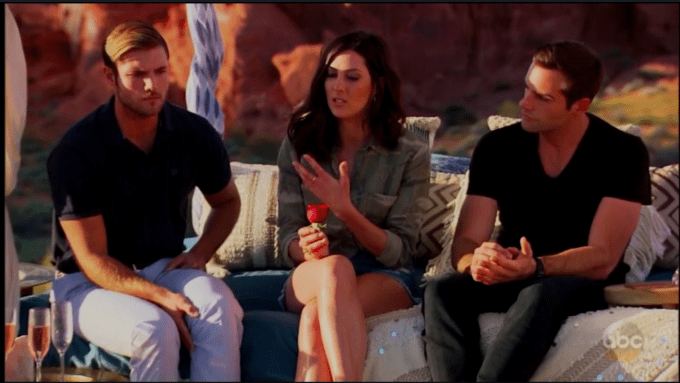 SPOILER ALERT: Do not read if you have not yet watched the June 25 episode of “The Bachelorette.”

Entering into Week 5 on “The Bachelorette,” Becca Kufrin is down to a dozen suitors, including two men with controversial backgrounds, and is continuing her journey for love in Sin City.

While Las Vegas is not usually associated with romance, the show cast aside the city’s signature debauchery for a week of glitz, glamour and nature, as well as the series’ iconic two-on-one date.

First, though, Colton landed the episode’s first one-on-one date, heading off of the Strip to ride camels and go for a dip in a desert hot tub. Because when you think of Vegas, you think of camels, right? Colton overcame some struggles early on in the season when he admitted his past relationship with Tia, Becca’s friend and fellow contestant on last season of “The Bachelor.” That dust seems to have settled, though, as Colton now appears to be in the front of the pack for the remaining men.

At dinner, he spoke about his part relationships and hesitations with falling love, but confessed to strong feelings for Kufrin. He easily landed the rose and the two proceeded to makeout in front of various Vegas landmarks. Love is so beautiful!

For the week’s group date, nine of the men met up with… Wayne Newton. The Vegas icon joined the Bachelorette and her suitors for a day of songwriting, with the men instructed to write a love song about Kufrin based on Newton’s hit “Danke Schoen.” In a typical reality show twist, the contestants then found out they would have to perform their songs in front of a live Vegas audience. Poor guys.

Since not a single one in the group could carry a tune, the bar was set very low for the evening, but Chris, who previously had a one-on-one songwriting date, stole the show. At the afterparty, Garrett Yrigoyen continued to solidify his spot at one of Kufrin’s favorites and Blake, another frontrunner, told her he was falling in love with her — and to camera, she admitted she was falling in love with him, as well. Blake went home with the group date rose, while Chris threw a fit about not getting enough time with Kufrin. Oh how far the mighty Vegas performers can fall.

After weeks of tension between David and male model Jordan, the two (of course) were sent on the dreaded two-on-one out into the Nevada canyons. David, still recovering from breaking his nose after falling out of his bed, took the low road early on, trashing Jordan for comments he’s made about other women and claiming that Jordan said if he ended up with the Bachelorette he would be settling. Jordan, obviously, tried to defend himself, setting off an intense battle between the two, as Kufrin called them out for acting like children and ruining the date. Yaaas girl!

Kufrin sent David home in the middle of the day but said she wasn’t ready to give the rose to Jordan yet, putting off the decision until dinner. At the sitdown, Kufrin wanted to get to know each other on a deeper level and Jordan wanted to talk about… modeling. He even asked producers to bring his portfolio and documented his daily beauty regiment. Run, Becca! The Bachelorette did end up sending Jordan home at the end of the night, and so another one bit the dust. See you in “Paradise,” Jordan!

At the week’s cocktail party, Kufrin and Chris, still salty from earlier in the week, got into a tiff as Chris repeatedly complained about not getting enough time and said he thought about leaving. Kufrin stood her ground and called him out about his behavior, once again proving she is not here to play games.

The two eventually worked it out, though, and at the rose ceremony she sent John home, knocking the group to nine remaining men. Next week, the final nine will travel to Virginia, but with Garrett, Colton and Blake clearly ahead of the pack, can the other six catch up?