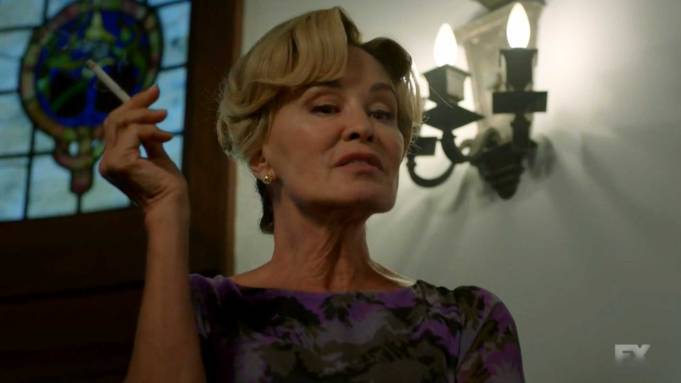 SPOILER ALERT: Do not read if you have not yet watched “Return to Murder House,” the sixth episode of “American Horror Story: Apocalypse.”

It was finally here, “American Horror Story” fans. “Apocalypse’s” “Return to Murder House” was Jessica Lange’s first appearance on the show since “Freak Show.” Sarah Paulson has done an excellent job taking over as Ryan Murphy’s leading lady, but Lange is the grand dame of “AHS” and expectations could not be higher. Luckily, Lange’s reprisal of Constance Langdon did not disappoint.

But before Ms. Lange’s highly anticipated appearance, Emma Roberts and Billy Porter were hilarious together as Madison and Chablis, posing as a married couple and buying the Murder House. Their facial expressions and one-liners during the meeting at the bank were worth the price of admission alone this week — “What can we say, the wife’s a sucker for a farmhouse kitchen?!”

The episode started with that delightful little scene and didn’t let up for a solid hour. When Madison and Chablis arrived at the Murder House, they were overwhelmed by the psychic energy and spirits residing there. It made for what was definitely the scariest “AHS” episode so far this season because the atmospheric tension and jump scares were plentiful. But it also allowed for the reappearance of “Murder House’s” key players — Ben Harmon (Dylan McDermott), Tate Langdon (Evan Peters), Billie Dean Howard (Paulson), Constance Langdon (Lange), Moira O’Hara (Frances Conroy), Vivien Harmon (Connie Britton) and Elizabeth Short (Mena Suvari) — and included an hilarious nod to Ben Harmon cry-masturbating while looking out the window. The “tearjerker” was an amazing callback.

But the writers did have to actually craft a plot to go along with the nostalgia train, so the jumping-off point of the episode was that Constance wouldn’t spill the details on Michael (Cody Fern) until Madison and Chablis banished Moira from the house. They dug up Moira’s bones and re-buried them with her mother’s bones, which allowed Moira to be free of the house and to be reunited with her mother. It was a surprisingly emotional breather in the middle of the jam-packed episode and also a lovely ending for that particular character.

After that, viewers finally got the story on Michael’s upbringing. When Michael was born, Constance was convinced he was her chance at a do-over after how poorly things turned out with her other four children. But he was evil right from the start, killing small animals until he “graduated to grander things,” like his babysitter. Constance finally realized Michael wasn’t just your “garden variety serial killer” when he aged a decade overnight. So she brought in a priest, who Michael also quickly murdered. She realized there was no hope for him and chose to end her life inside the Murder House, where she could at least stay forever with three of her ghost children. It was a depressing way for Constance Langdon to go out, but also kind of a beautiful ending for her.

Interesting side note — “Return to Murder House” also finally gave a glimpse of Constance’s fourth child — a little girl with no eyes. It’s a shame the show didn’t have time to add a few more details to that, though, as long-time fans have wondered about the unnamed fourth Langdon child since “Murder House’s” second episode.

Anyway, after Constance committed suicide, Ben took over raising Michael, trying to foster his good side, but Michael just couldn’t overcome the darkness. When two women bought the Murder House and moved in, Michael killed them both before a single box was unpacked. But he didn’t just kill their physical bodies, he made their spirits cease to exist, as well, which is some serious power. After regaling Chablis and Madison with this charming tale, Ben confessed that Michael was beyond his help — and that’s when the other big appearance of the episode finally happened. Britton reprised her role of Vivien Harmon, reconciling with Ben and telling the witches that Michael isn’t just “evil”; he’s the Antichrist.

The quote Vivien laid on the witches was from Revelation 13:1-10, though it was cut down considerably from the full verse: “Then I saw a beast with 10 horns and seven heads rising out of the sea. And all who dwell on the Earth will worship him.”

Vivien continued, explaining that Michael grew darker and darker until finally, the Black Pope of the Church of Satan arrived with two followers in tow — Miriam Mead (Kathy Bates) and an unnamed woman played by “AHS” regular Naomi Grossman. They kidnapped a young girl for their Black Mass, which involved removing her heart while she was still alive and then Michael ate it. Ew. But at least we know how Michael ended up with Miriam.

Vivien’s parting shot was that she doesn’t think Ben or Tate is Michael’s father. The father was the darkness of the house and now Michael is there to destroy the world.

Before the episode signed off, it delivered one last piece of major fan service. Madison found Violet (Taissa Farmiga) crying over how she’s in love with an evil person (Tate), so Madison told her that Tate’s evil left the house with Michael and opened her eyes to how he’s actually a pretty good guy. While that may be debatable, he did save Vivien when Michael tried to burn up her soul. The Violate shippers are strong and now they have their favorite couple reunited. Again — this episode could not have been more stuffed with homages and terrific moments for fans. Bravo.