‘American Horror Story’ Recap: ‘Apocalypse’ Flashes Back to Hotel Cortez and Reveals the Power Struggle Between Witches and Warlocks 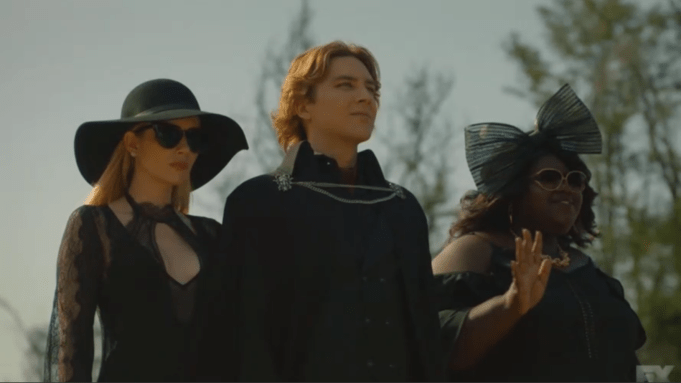 SPOILER ALERT: Do not read if you have not yet watched “Could it be…Satan?”, the fourth episode of “American Horror Story: Apocalypse.”

“American Horror Story: Apocalypse” really kicked things into high gear last week with the arrival of the “Coven” witches and things did not slow down this week with “Could It Be… Satan?” with the return of another magical blast from the past in Gabourey Sidibe’s Queenie, as well as the introduction of a tribe of warlocks.

The episode started off with a couple big reveals about Michael Langdon (Cody Fern). First, as told through flashbacks, he wasn’t raised by his grandmother Constance Langdon (Jessica Lange), which was what long-time “American Horror Story” viewers assumed after seeing her with the younger version of him at the end of the first “Murder House” season. Instead, though, he was raised by the human version of Miriam Mead (Kathy Bates), a devil-worshipping surrogate mother who promised she’d always be there for him, even when he was leaving her behind to join the warlocks.

It was not made clear what happened to Constance or how Langdon came to live with Mead, though if the speed at which this season is moving through story thus far is any indication, those answers are sure to come in the sixth episode, in which Lange is set to return as a guest star.

Still in flashbacks, it was revealed that Langdon killed a butcher by clenching his fist and willing knives to fly through the air and stab the man who was mean to Mead. But he didn’t appear to fully be in control of his powers just yet. He got arrested and performed a similar, though strikingly more severe, attack on the officer interrogating him. This put him on the radar of a group of warlocks (or are they called a coven, too?) made up of stellar Ryan Murphy repertory players Jon Jon Briones, Cheyenne Jackson, Billy Porter and BD Wong. The men thought they recognized one of their own in Langdon and went to bust him out of jail.

Interestingly, Langdon seemed to be downplaying how much he knew about his abilities for a majority of his youth, as evidenced when he walked out of his jail cell and feigned being impressed at the warlock’s abilities, only to twist his hand sinisterly and snap the guard’s neck. Better to be underestimated so he could learn what the others can do first, probably.

The warlocks put Langdon through a series of tests, only to discover that he could do more than each of the elders. This made three of them gleeful, while only John Henry Moore (Jackson) was worried and could see the malevolence behind Michael’s actions.

Langdon acing the warlocks’ tests led them to beckon the current Supreme, Cordelia (Sarah Paulson) to their quarters to put Langdon through the test of the Seven Wonders in the hope that he would show himself to be the Alpha of prophecy, purportedly a warlock with powers greater than the Supreme, whom he would supplant, thereby raising the warlocks above the witches.

Yes, that’s right, “Apocalypse” found a way to get topical, even when dealing in years-ago supernatural elements. In this world, the witches and warlocks have been fighting against each other, not working as allies, with the warlocks feeling threatened that the witches always had the most power.

The warlocks’ quarters, by the way, was the Outpost 3 compound, admittedly in better light since it was pre-apocalypse. The warlocks used to have a huge building, but too many people could see in and got spooked after Cordelia went on her “publicity tour” in “Coven,” so the warlocks retreated underground into the Hawthorne School for Exceptional Young Men.

Meanwhile, the coven still had their beautiful quarters in New Orleans, where Zoe Benson (Taissa Farmiga) was training some up-and-coming witches, including Mallory (Billie Lourd), who exhibited more gifts than the others, Coco (Leslie Grossman) and Dinah (Adina Porter). That explained why they were sought out to be resurrected after Venable (Paulson) poisoned everyone in the third episode. But why their memories were wiped “for their protection” so they didn’t know they were witches in the first place remains as a layer still to be peeled back.

Upon being informed that Michael’s powers rival that of the Supreme, Cordelia was in complete disbelief, revealing that in all of history no man ever had the powers of a Supreme. Apparently, testosterone limits magical ability to a certain extent. The men railed on her for not even being open to running the Seven Wonders test and she replied that she lost Misty Day (Lily Rabe) when they administered the test before Misty was ready. Cordelia was not about to lose another young life that way.

The men then brought up Queenie’s disappearance into the Hotel Cortez and there was a flashback within a flashback to when Cordelia tried to save Queenie from James March (Evan Peters) but couldn’t because Satan’s power in that “hellmouth” overrode Cordelia’s power. She told the men that not being able to save Queenie still haunted her and was her greatest failure as Supreme.

She still refused to do the test on Langdon because she thought it would kill him, though the warlocks accused her of not wanting to do it because she felt threatened. Either way, the council of witches declared the meeting over, and Langdon went to the Hotel Cortez to rescue Queenie himself.

Of course he was successful, and even March was quieted by his presence. But that was not enough for Langdon, who was walking taller with each new exertion of power. He headed for Madison’s personal hell — which was working at a Walmart-esque store where customers mistook her for Lindsay Lohan — and plucked her back up to Earth and to the Hawthorne school to prove to Cordelia how powerful he is.

Once Queenie and Madison’s souls were resurrected, Cordelia began to feel faint but attributed it at first to the stale air in the compound. But once she was outside and saw the two of them back from the dead, she literally fainted. She may try to play it off as surprise, but surely she knows her powers are draining due to Langdon’s presence.