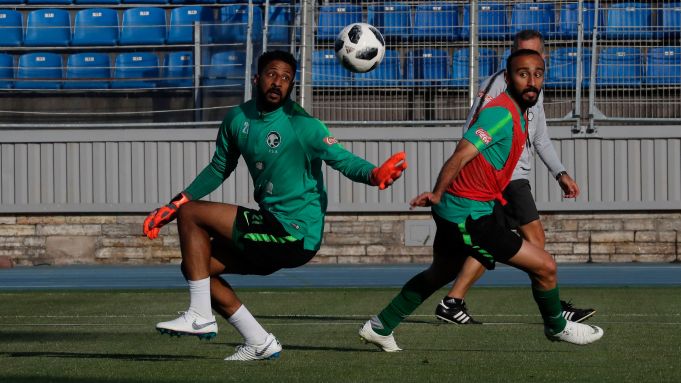 When Saudi Arabia plays host nation Russia in the World Cup’s opening match Thursday, millions of Saudi soccer fans may have no choice but to use illegal means to watch their team because of an ongoing diplomatic crisis.

With just a day to go before kickoff, Saudi authorities have yet to strike a deal with Qatar’s beIN Media, which holds broadcasting rights to all 64 World Cup matches for the Middle East and North Africa. The lack of an agreement is hardly surprising, given that Saudi Arabia and a few other Arab countries have severed ties with Qatar and imposed a blockade on the tiny gas-rich nation for the past year.

State-owned broadcaster beIN is a spinoff of Al Jazeera, the Qatari news network now banned by Saudi Arabia, the United Arab Emirates, Egypt and Bahrain as part of their blockade. The countries accuse Qatar of supporting extremist groups in the region. Qatar – which, by coincidence, will host the next World Cup, in 2022 – vigorously denies the allegation.

FIFA, soccer’s international governing body, has reportedly been trying to broker a $35 million deal between beIN and the Saudi sports authority for rights to 22 matches, including the opening and closing matches and all games played by the Saudi team. But so far no agreement has been reached.

Bloomberg reported that indirect negotiations were held last week in Zurich, Switzerland, between FIFA officials and Saudi sports authority chief Turki Al Alshikh, who was quoted as saying that “Saudi Arabia has shown good faith.” But beIN said in a statement that “preliminary discussions” through FIFA intermediaries had yet to yield a deal.

An 11th-hour agreement has indeed been reached, however, with Emirati telecom Etisalat to carry the games in the UAE, beIN has announced.

The rift between beIN and Saudi Arabia over World Cup rights has been exacerbated by the fact that, in recent months, several pirate satellite channels insultingly called beoutQ have pilfered premium live sports content from the beIN feed and made it available to Saudi viewers. Decoders and smart cards to access this content are being sold in Saudi Arabia.

Constantinos Papavassilopoulos, an analyst with IHS Market, said that during the tournament the Saudis will “basically be stealing the beIN World Cup satellite feed and superimposing ‘beoutQ’ on the beIN logo.” He noted that the diplomatic blockade against Qatar had delivered a big financial blow to beIN Media, causing the company to lose access to 40% of its subscriber base. Saudi Arabia was its largest market, with close to 900,000 subscribers.

BeIN has reported the beoutQ pirate channels to FIFA and to pan-Arab satellite operator Arabsat, in which Saudi Arabia is the largest shareholder. But “Arabsat has not done anything to remove those pirate channels from its satellite feeds,” Papavassilopoulos said, and FIFA can do little about it.

Egypt, whose national team also qualified for the World Cup, has said it would resort to piracy after unsuccessfully trying to get a FIFA-brokered deal with beIN. The Egyptian Competition Authority issued a statement Monday saying that Egyptian consumers have “a right” to see the games and urged FIFA to “make them available.” The authority made clear that it would illegally tap into the beIN feed to 22 matches in order to air them on Egyptian public television.

The standoff “is hurting legitimacy” in the region, Papavassilopoulos said. “It’s hurting the pay-TV landscape and investments, and it’s helping piracy grow at a time when this region is trying to do exactly the opposite, to curb its rampant piracy plague.”

But “political considerations are taking precedence,” he said.