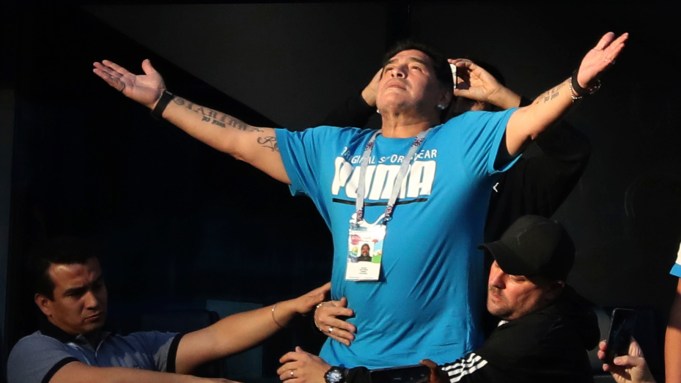 The soccer legend then reportedly collapsed after the match and had to be helped up out of his seat by paramedics, according to ESPN. He was immediately admitted to a local hospital. The 57-year-old was recently hospitalized before the World Cup due to knee problems. The Independent confirmed that his health is in stable condition.

It’s not the first time Fox has seen a wild gesture during the World Cup this year.

During the opening ceremony at Luzhniki Stadium in Moscow, singer Robbie Williams gave the middle finger to the camera during his performance.

As he sang a bevy of his hits, Williams turned directly to the camera during “Rock DJ” and changing the lyrics to “I did this for free” before lifting up his finger.

Fox, which own the U.S. media rights along with NBCUniversal’s Telemundo for this year’s World Cup, for English- and Spanish-language broadcasts respectively, as well as the 2022 and 2026 events, immediately apologized for Williams’ behavior.

“The 2018 FIFA World Cup opening ceremony was a newsworthy event produced by a third party and carried live on Fox. As it was broadcast live, we did not know what would happen during Robbie Williams’ performance and we apologize.”

Williams later apologized for his actions as well, admitting his regret: “Yeah, of course. I can’t trust me, I cannot trust me…I don’t know what I’m going to do at any time.”

He went on to explain how “the plan was sing in key, don’t fall over. That was the plan, and 99% of the plan I pulled off.”

Maradona has yet to comment on the incident during today’s match.