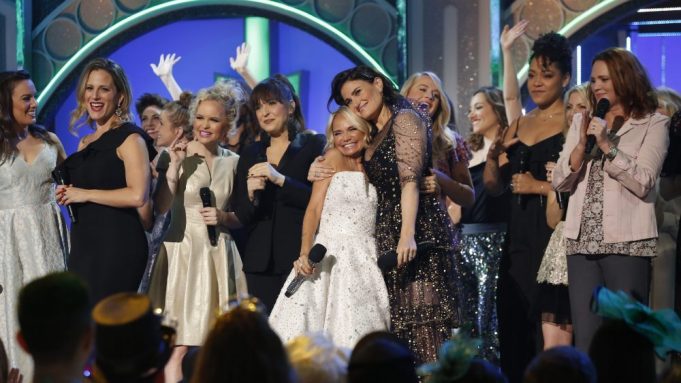 Kristin Chenoweth remembers the day Ariana Grande came to see the original Broadway production of “Wicked.” Adam Lambert fondly recalls playing the role of Fiyero in the touring production before “American Idol” made him a star.

Original cast members and first-wave fans of the smash Broadway musical “Wicked” have come together for a salute to the tuner’s 15th anniversary on Broadway, set to air Oct. 29 as an hourlong special on NBC.

Chenoweth has been part of the fabric of “Wicked” from the beginning – the role of Glinda was written with her in mind – but 15 years on, she confesses that she didn’t realize at the time how important the musical would be to so many.

“It’s impacted my life when I get to meet people who say, ‘It’s one of the first shows I saw and the first scores I heard,’” she told Variety ahead of the taping for NBC’s anniversary special, “A Very Wicked Halloween,” which airs Oct. 29.

The special features stars of the original production, Menzel and Chenoweth, performing hits from the tuner from author Gregory Maguire and composer Stephen Schwartz, with guests including Grande and Lambert.

Grande was one of those performers touched by her experience seeing “Wicked.”

“I remember when she came to see it when she was a little kid, and now she’s the heart of the show,” Chenoweth said. The two have grown close over the course of rehearsals for the NBC special. Chenoweth refers to Grande as “someone I love very much,” and she gushed about her 25-year-old co-star at every opportunity. “It couldn’t get any bigger than her, but I just expect bigger and bigger things from her and her career for the rest of her life. She’s my baby,” Chenoweth said.

The members of Grammy Award-winning a capella group Pentatonix are also among a generation of performers raised on “Wicked,” which makes participating in the special all the more exciting. “It was such a huge part of our growing up. It kind of shaped us as musicians and performers – musical theater is what made me fall in love with music in the first place,” said Kirstin Maldonado, who made her own Broadway debut earlier this year in “Kinky Boots.”

“It’s seriously so mind-blowing, not only because we grew up singing this and listening to it religiously, but just to be alongside people who have really paved the way for this industry and that we’ve looked up to growing up,” lead singer Mitch Grassi added. “It’s a really weird, full-circle moment.”

Lambert also characterized the NBC special as a “crazy full-circle opportunity” — he first played Fiyero more than a decade ago, years before the run on “American Idol” that would make him famous. “It’s beautiful: so much has happened since I was cast,” he told Variety. Despite those successes – including a Grammy nomination, three solo albums, and an ongoing collaboration with Queen – “Wicked” still holds a special place in his heart.

“We were the first national cast, so that was right on the tail end of the Broadway production cleaning house at the Tonys. Very exciting! I knew that on my theater resumé, that would always have a shining spot,” he said.

The 15th anniversary performance has been similarly nostalgic for Menzel, particularly coming on the heels of her new best-of album, “idina:live.”

“It’s a moment of reflection, just to think about the journey I’ve been on and the experiences that have gotten me to where I am, ‘Wicked’ being one of them that really informed who I am as an artist,” she said. “I built up my confidence as a performer, an actress, a singer – and I’ve learned what an incredibly important responsibility I have to this younger generation to talk about and embody belief in yourself.”

Both “Defying Gravity” from “Wicked” and Menzel’s “Frozen” power ballad “Let It Go” have become anthems for the marginalized, a phenomenon Menzel takes seriously as well as an opportunity she cherishes every time she performs.

“I get to sing them all the time and remind myself how lucky I am to have those experiences, that music, these characters and stories in my life that allow me to try to reflect this idea of owning who you are, what makes you unique and different and special and extraordinary,” she said. The key, she believes, is not to step back from those differences, but to embrace and celebrate them: “Once you do that, that’s what gives you the power to change the world.”

Menzel’s reunion with Chenoweth (who played Glinda to her Elphaba in “Wicked”) has been another source of joy. “Anytime we can get back in the same room together is really lovely,” she said. “And this is especially profound and moving for us – to commemorate this time and look back at what we helped create together.”

Chenoweth feels the same. “We have separate lives, separate careers, and we’re busy, you know? But when we come together, it’s like, ‘Hey girl, hey!’” she said, laughing. Rehearsing together again has only reaffirmed the strength of that bond, no matter where the pair go next. “We had an experience! Nobody can take that from us.”

(Pictured: Kristin Chenoweth and Idina Menzel with other “Wicked” performers from over the years.)