Everything We Know About ‘Sharp Objects’ 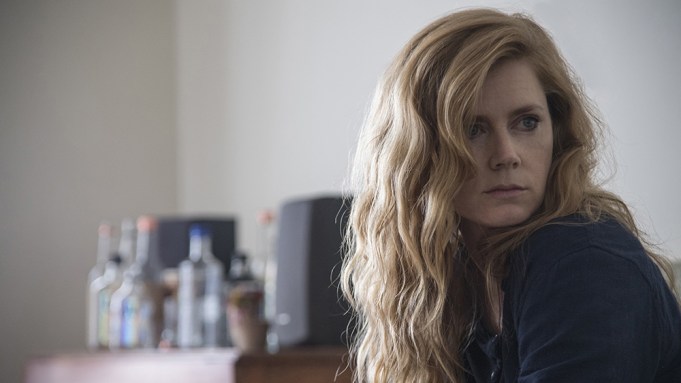 Gillian Flynn’s bestselling novel “Sharp Objects” is heading to the small screen this weekend. The eight-episode miniseries premieres Sunday on HBO, bringing another chilling, twisted story to the premium cabler, where “Big Little Lies” debuted to a massive audience and fanfare last year.

Here’s everything we know so far about “Sharp Objects.”

It premieres this weekend.

Like its “Big” counterpart, the show features a star-studded cast led by Amy Adams, Patricia Clarkson, and Chris Messina. The series marks a reunion for Adams and Messina, who starred as a couple in the 2009 comedy-drama “Julie and Julia.” In “Sharp Objects,” Adams plays a reporter who returns to her small hometown to cover the murders of two preteen girls.

It will mark Flynn’s third novel to be adapted for the screen.

Flynn’s debut novel, “Sharp Objects,” hit bookshelves in 2006. Since then, Flynn went on to publish two more books, “Dark Places” and “Gone Girl” — both of which have gotten the big-screen treatment. Flynn made her screenwriting debut on David Fincher’s “Gone Girl,” starring Ben Affleck and Rosamund Pike. The movie, which hit theaters in 2014 to critical acclaim, earned her a Golden Globe nomination. However, “Dark Places” — the 2015 thriller with Charlize Theron — wasn’t as well received. Flynn also co-wrote “Widows” with Steve McQueen, starring Viola Davis and opening in theaters later this year.

Adams was originally set to star in “Dark Places.”

“Sharp Objects” marks the first time Adams has worked on a Flynn adaptation, but she was also in talks to star in “Dark Places” in 2015. However, Theron ultimately took the role.

The series is created and co-written by Marti Noxon.

The “Buffy the Vampire Slayer” alum is no stranger to writing shows about kickass women; she co-created the Lifetime series “UnREAL” and executive produces Bravo’s first original scripted series, “Girlfriends’ Guide to Divorce.” She recently adapted another bestselling novel, “Dietland,” for AMC.

“Sharp Objects” comes from the director of “Big Little Lies.”

Jean-Marc Vallee may be the man behind such Oscar fare as “Wild” and “Dallas Buyers Club,” but he also earned accolades for directing the first season of the widely praised “Big Little Lies” for HBO last year, netting himself an Emmy for best director of a limited series along the way. Vallee returns to HBO to helm “Sharp Objects” and, as some critics have pointed out, the two series have more than a few things in common.

Despite tackling dark subject matters, “Big Little Lies” managed to be both comedic and sinister along the way, portraying the story of the unraveling relationships of moms in a California beach town. “Sharp Objects,” however, has a Southern Gothic tone with its Missouri setting. As Variety’s Daniel D’Addario put it: “Its handling of truly twisted subject matter (in scripts by Marti Noxon and Flynn herself) is frank and unblinking, digging out insight about the most damaged of people and the harm they do to themselves and to others. With a cast led by Adams operating at the peak of her abilities, ‘Sharp Objects’ is dazzlingly itself, a show in thrall to the horror of its premise but one that finds nuance within unremitting darkness.”