‘Westworld’ Recap: Are We Having Fun Yet? 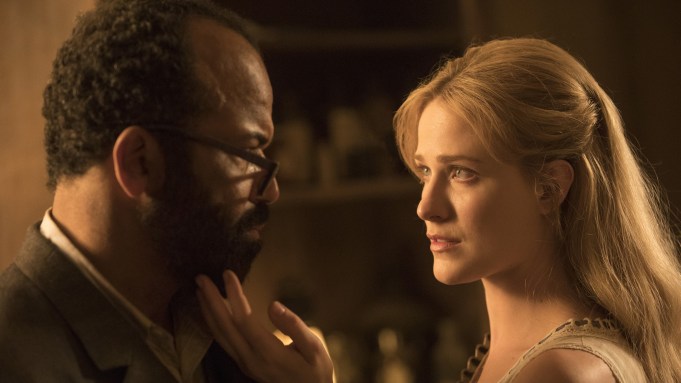 Do not read on unless you’ve seen “Virtù e Fortuna,” the third episode of the second season of HBO’s “Westworld.”

If you were wondering what music could possibly scream “white privilege” more than any other music, “Westworld” season 2, episode 3 has the answer for you: The White Stripes’ “Seven Nation Army” arranged for sitar. It helps if the music is accompanied by images of Edwardian white folks dining outdoors in colonial India, which “Westworld” is happy to provide.

The beginning of “Virtù e Fortuna” is not a subtle ride, but it is a fun one — appropriate for one of the most fun-to-watch episodes of a show that has often skimped on the stuff. First we see our unnamed protagonist (antagonist?) lounge, screw, and vacation in typical guest fashion. Would she be at all sympathetic if she didn’t talk like Holly Hunter? No, probably not. Is that robot tiger chasing her because he’s a robot or because he’s a tiger? We may find out in time. Or we won’t. “Westworld” is a show whose primary purpose seems to be to inspire debate over its minutia and narrative machinations. If that’s your thing, the beginning of “Virtù e Fortuna” is important mainly because it’s the first good look we’ve been given of one of the other Delos parks.

But let us consider, for a moment, that the point of watching a TV show shouldn’t be to uncover every Easter egg, the allegorical value of every morsel of dialogue, the hidden-in-plain-sight meaning of every single thing that happens in every single scene. What if we watch a TV show — particularly an action-oriented science-fiction TV show — just to be entertained?

No? Fine. Regardless, watching that British Raj fangirl outrun danger was fun, and it would be swell if this season of “Westworld” provided more along the same line, regardless of that character’s fate — which did not, by the way, look promising. (The big battle between the Confederados and the Delos army later on was also good time spent.) Anyway, back to the puzzlebox.

After the opening credits we see the Delos strike force, which continues to include a surprising number of middle-aged men in tailored jackets. Why not dress one way for a business meeting and another for accompanying a private army to a secret island to put down the robot revolution? Just a thought. Regardless, there is, in the spirit of fun, a lot to like in this long run, which begins post-flood then quickly flashes back to the uprising. Highlights include Charlotte flipping the bird, Rebus transforming into “the fastest, most virtuous gun in the West,” and Abernathy singing “Battle Hymn of the Republic.”

Oh, yeah, Abernathy, the guy who has the entire history of the park in his head. He’s around.

As we learn from most-recent-timeline Charlotte, Abernathy is still at large as far as Delos is concerned post-flood. In the revolt timeline, we see him reunite with Dolores at Fort Forlorn Hope.

About Dolores. The Wyatt element of her personality is in full bloom, as we see when she identifies herself to the fort commander. So it should be no surprise later when her Tusken Raiders set up the Confederados to be massacred.

Potentially important plot thing: Dolores saying “Truth is, we don’t all deserve to make it.” Shortly thereafter, she looks none too pleased at Teddy sparing the remaining Confederados. Remember, it’s Teddy we see floating dead in the water alongside countless other hosts at the end of the season premiere. No Dolores in sight there.

In other Dolores news, she goes very not-Wyatt over Abernathy, which leads to some nice Dolores-Bernard stuff. She clearly doesn’t care for Bernard, though she recognizes his usefulness. But with Abernathy taken by Delos soldiers, sentimental Dolores and complete a–hole Wyatt are set up for some significant conflict.

While Dolores and Bernard and Teddy and Charlotte and everyone else are doing the narrative heavy lifting, Maeve, Hector, and Lee are over here making the show fun. Witty banter! Running from Ghost Nation! Reuniting with Felix and Sylvester! And Armistice!

There’s a better version of this recap that exists somewhere in an alternate universe, one that explores in depth just how divergent the Maeve and Dolores threads have become. Dolores, unfortunately, seems to be responsible with advancing the big machinery, all the stuff about the revolution and the meaning of life and the nature of violence and so on and so forth. Maeve’s story increasingly just appears to be about fun characters (Maeve, Hector, Lee, Sylvester, Felix, Armistice) being on an adventure (saving Maeve’s daughter.) I know which thread I’d like to see more of.

• The Holly-Hunter-talking lady’s run past the park boundary seemed to purposefully echo Michael Crichton’s original “Westworld” movie, which, as a colleague told me recently, “We all decided to pretend to care about back when this show got greenlit.”

• Would Lee really talk back to Hector quite that much? At first I thought no, but then I came around to the idea that he would. Lee is a coward, but he’s also bad at reading social cues and bounces between extreme confidence and extreme insecurity. He’s the “Westworld” version of Pete Campbell.

• At this point Teddy’s death will be a mercy killing.