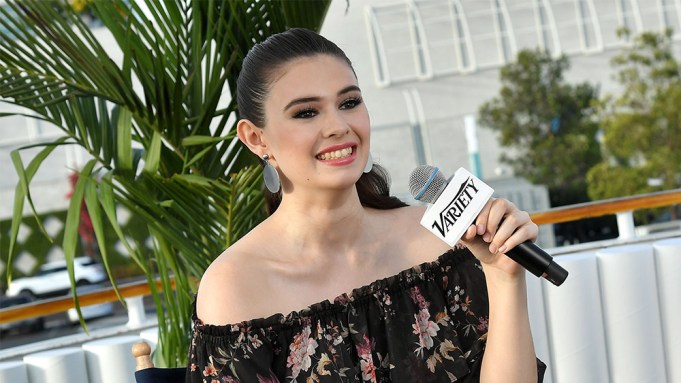 Warner Bros. Television had plenty of news coming out of its Comic-Con panels, including the casting of Nicole Maines as the first transgender superhero on “Supergirl,” Chris Klein as the new big bad of “The Flash” and Penelope Ann Miller as a district attorney on “Riverdale.”

Three new cast members are joining the DC superhero drama when it returns for its fourth season Sunday, Oct. 14 at 8 p.m. on the CW, including transgender activist Nicole Maines, who will be portraying Nia Nal aka Dreamer, television’s first transgender superhero. Joining Maines are new series regular April Parker Jones, who will play Colonel Haley, and David Ajala, who will recur as Manchester Black.

Nia is being described as a “soulful” transgender woman with a “fierce drive to protect others.” The season she will follow in Kara’s (Melissa Benoist) season 1 footsteps in coming into her own and fulfilling her destiny as a superhero. Colonel Haley is a “hardline career military woman [who] lives and dies by the orders of her commanding officers” and will act in the country’s best interest, even when it doesn’t match her own. Based on the DC character, Manchester Black has a dark past but “easily deflects the brutality of his mission with charm and a sense of humor.”

These three join the previously announced new series regulars Jesse Rath as the Legion of Super Heroes’ Brainiac-5 and Sam Witwer, who will play Agent Liberty, this fall.

Chris Klein has signed on to play Barry Allen aka The Flash’s (Grant Gustin) next adversary, DC super-villain Cicada. The second non-speedster big bad of the long-running superhero series, Cicada is described as “the scourge of Central City.” A grizzled, blue-collar everyman whose family was torn apart by metahumans, Cicada is out to take them all out, one at a time, when “The Flash” returns for its fifth season Tuesday, Oct. 9 at 8 p.m. on the CW.

Watch “The Flash’s” Comic-Con trailer below:

Penelope Ann Miller has been cast on the third season of the Archie Comics-inspired drama. She will play a district attorney named Mrs. Wright who comes to town to prosecute the case against Archie Andrews (KJ Apa), who was framed for murder at the end of season 2. “Riverdale” returns to the CW Wednesday, Oct. 10 at 8 p.m.

He may have saved Freeland in season 1, but Black Lightning (Cress Williams) won’t have it easy in season 2. Jordan Calloway has been promoted to a series regular on the CW superhero drama. He will be returning as DC villain Painkiller in the show’s sophomore season. Series creator and executive producer Salim Akil made the announcement during the show’s panel in San Diego Saturday.

Payne is given cybernetic enhancements that transform him into the Painkiller, meta-strong and able to generate an anesthetic from his body that causes temporary paralysis when delivered through darts. “Black Lightning” returns for season 2 Tuesday, Oct. 9 at 9 p.m. on the CW.

“Black Lightning” also got a special SDCC trailer, which you can watch below:

“The Vampire Diaries” and “The Originals” spinoff “Legacies,” starring Danielle Rose Russell and Matt Davis debuted a new trailer Saturday. Drafting off the success of the series that came before it, the video promised “a new generation” of such popular storytelling would be born but also acts as an introduction to the world and the characters for anyone unfamiliar with the first two series. “When we’re young, we’re taught the difference between a hero and a villain — good and evil, a savior and a lost cause,” Russell as Hope Mikaelson narrated, “but what if the truth is that the only difference is who’s telling the story?” “Legacies” premieres Thursday, Oct. 25 at 9 p.m. on the CW.

The time-travel ensemble superhero series is adding two new faces for its fourth season. Ramona Young has been cast in the series regular role of Alaska Yu, a “typical 20-something easily swept up in romantic notions and fantasy novels [who is also] something of an expert in the world of the magical creatures that the Legends encounter.” And Tom Wilson is set to recur as Nate’s (Nick Zano) charming military father, Hank Heywood, whose shoes Nate struggles to fill and who has to be kept in the dark about his son’s superhero alter ego. Young and Wilson join the previously announced Matt Ryan, Ava Sharpe and Courtney Ford in the fourth season of “DC’s Legends of Tomorrow,” which premieres Monday, Oct. 22 at 9 p.m. on the CW.

Watch the “Legend of Tomorrow” Comic-Con trailer below:

The CW’s first superhero drama is seeing an expansion of its cast in season 7 with both new and returning players. Joining the cast as the Longbow Hunters, a “legendary” group of assassins recruited by Richardo Diaz (Kirk Acevedo) are Holly Elissa, who will play the “ruthless and precise killer” Red Dart; Michael Jonsson, the “beast of a man with brute force” Kodiak; and Miranda Edwards, the master of stealth called Silencer. Returning foes for the titular crime-fighter include Michael Jai White as Ben Turner aka Bronze Tiger, Derek Sampson as Cody Runnels and Vinnie Jones as Danny “Brick” Brickwell. “Arrow” returns to the CW Monday, Oct. 15 at 8 p.m.

The live-action Teen Titans television show is straying from its action-packed cartoon past, choosing instead to go for a grittier, grimdark tone this time around. In Warner Brothers’ most recent trailer for the upcoming DC Universe show, Brenton Thwaites prowls in the shadows as Dick Grayson, the first Robin, and murders a group of alleyway thugs. He breaks the neck of the last survivor and growls “F— Batman,” setting the tone for the rest of the trailer. Teagan Croft also stars as Raven, the daughter of a powerful demon whose dark powers are controlled by her emotions, alongside Ryan Potter, who plays Beast Boy, a green-skinned teen who can turn into any animal he can think of. The final member is Starfire, played by Anna Diop, a fugitive alien princess with the ability to fly and shoot energy from her hands.

Back by popular demand, “Young Justice” returns with a third season focusing on the Outsiders team. Premiering on DC Universe for on-demand streaming later this year, Warner Brothers dropped a five-minute sneak-peek trailer featuring several scenes from the upcoming show. Featuring an invasion by Black Beetle, the abduction of Tara Markov and Aqualad going deep undercover to spy on Black Manta, the Outsiders look to be plenty busy when the show returns.