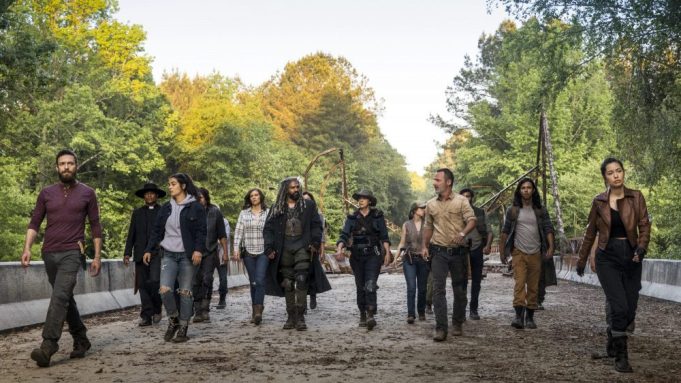 “The Walking Dead” returns for its ninth season in a state of flux.

The juggernaut AMC series has a new showrunner at the helm in Angela Kang, making her the fourth showrunner in the show’s history. At the same time, series mainstay Andrew Lincoln will be leaving the show while fellow star Lauren Cohan will only appear in a handful of episodes due to her commitment to the upcoming ABC series “Whiskey Cavalier.”

On top of all of that, “The Walking Dead” has been facing a growing wave of criticism for its past few seasons. Fans and critics have lambasted the show for what they feel is slowly-paced storytelling and an over-reliance on gore, blood, and guts rather than character development. Those criticisms have been reflected in the show’s ratings: While still a massive presence on television, the show has seen serious declines in its Live+Same Day numbers.

The previous series low in the key adults 18-49 demographic was set in Season 1 with a 2.4 rating. During Season 8, the show came dangerously close to matching that low, with the lowest-rated episode of the season coming in at a 2.6. In addition, the Season 8 finale was the lowest-rated since Season 1 with a 3.4 rating, while the Season 8 premiere was the lowest-rated since Season 3 with a 5.0. Though most series would crow about such ratings, it’s not great for what is frequently touted as the number one show on TV.

Yet there may be some light at the end of the zombie-filled tunnel. Kang’s love for the show and the Robert Kirkman comic book series is undeniable, and that energy and passion may well be what that the show needs in this new chapter.

Speaking with Variety, Kang did not shy away from the criticisms levied against the show.

“None of us live in a vacuum so it would be dishonest of me to say that I’ve never heard any of that stuff,” she said. “I don’t often go out seeking that stuff out there, because we really need to concentrate on making the best story possible. But I think a lot of times, we do our own internal reckonings, like ‘To us, it feels like we’ve done a lot of this type of story. What’s a new way to tell this? What are some of the things that we miss doing?’ And a lot of times that lines up with things that fans or critics have been feeling. So we’re not trying to chase something but we have a responsibility to ourselves and our viewers to not rest on our laurels.”

Early reviews for the Season 9 premiere have been mostly positive, with critics describing the episode as a “fresh start” and one of the better installments in some time. But is that momentum sustainable without Lincoln in place as the leader on set? The assumption has been that Norman Reedus, a.k.a the gruff Daryl Dixon, would fill that role with Lincoln gone, but Kang says that is not necessarily true.

“It’s a group dynamic,” she says. “Norman sort of has Daryl’s attitude, like ‘I don’t wanna be called number one.’ In his own way, he leads. I think Danai [Gurira] is a wonderful leader as well. She has her own style of things. She very much looks out to make sure things are fair for people. Melissa [McBride] is a wonderful presence that anchors stuff when she’s there…. At this point, I don’t think any one person has to be like, ‘OK, I’m the leader, guys.’ Everybody just knows whenever you’re in a scene and you’re the senior person, you set this example of the professionalism and the respect that has been the vibe of the show since the beginning, which was set by Andy. I think that’s a big part of his legacy to the show.”