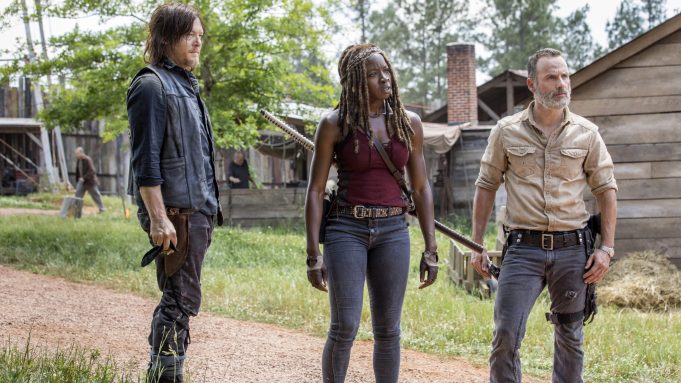 Change is coming to “The Walking Dead.”

Season 9 of the AMC series premieres this week, and the show’s female characters look to be taking on even bigger roles this year.

“It’s new. It’s fresh. It’s very powerful,” series star Norman Reedus said at a press event ahead of the premiere. “We’ve always known that the women were a powerful force on the show, but for the last couple years we’ve gone on this journey of this man versus this man. The stories seem more complicated this year, more emotional. And it’s nice to see Danai [Gurira] step up, Melissa [McBride] step up, Lauren [Cohan] has some really good stuff. The new cast of women are really killing it this year.”

Leading the charge is new series showrunner Angela Kang, who was promoted to the top spot on the show back in January. According to Kang, she and the team on the show not only worked on how to ramp up the writing, but the visual style of the series as well.

“We really experimented with a new look to a lot of our sets and the way we’re filming things,” Kang said. “You go into it with the best hopes for what it might be like, but the crew on the ground just have performed above and beyond my wildest hopes. They just really dove in headfirst. And I think our production design team did great work this season, and our DPs really did some incredible stuff.”

Of course, the biggest story around “The Walking Dead” this year has been the confirmed departure of series star Andrew Lincoln, who has been with the show since episode one. According to Reedus, filming Lincoln’s final scene was an emotional experience.

“I knew he was leaving before they knew he was leaving, so I knew it was coming,” he said. “I still didn’t like it. He did his last scene and he got up and gave this speech. Everyone gave him a standing ovation. It’s been almost a decade he’s been leading this team. Some of the cast picked up their phone and he goes, ‘Put down your phones. This is ours. This isn’t for social media. This is our time.’ I think where he left that, everyone else picked that up.”

“The Walking Dead” Season 9 premieres this Sunday at 9 p.m. ET/PT on AMC.