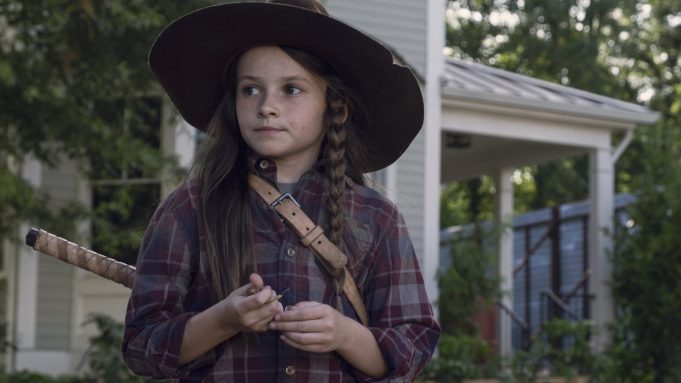 SPOILER ALERT: Do not keep reading if you have not seen Episode 6 of Season 9 of “The Walking Dead,” titled “Who Are You Now?”

The post-Rick Grimes world of “The Walking Dead” came into focus with this week’s episode, introducing several new characters while offering a fresh look at some old ones.

Years have passed since Rick’s apparent death at the bridge. Michonne (Danai Gurira) now stands by the edge of the water, talking as if she were talking to Rick. As she does, the episode flashes to people like Daryl (Norman Reedus), who is now living a solitary life in the wilderness; Carol (Melissa McBride), who is rocking a new hairdo while serving as Ezekiel’s “queen” at the Kingdom; and Michonne herself, who is seen scavenging an abandoned vehicle. There she finds a figurine of an old West sheriff who looks an awful lot like Rick.

We then see the continuation of the final scene from last week’s episode, wherein a more grown up Judith Grimes (Cailey Fleming) has rescued a group consisting of Magna (Nadia Hilker), Luke (Dan Fogler), Connie (Lauren Ridloff), Kelly (Angel Theory), and Yumiko (Eleanor Matsuura). The hunting party from Alexandria that Judith was with includes Aaron (Ross Marquand), who is know sporting an artificial arm. They tell Judith that they are not to bring back any new people, but Judith points out that Yumiko is injured and says she will not return without the newcomers.

At the Kingdom, Carol and Jerry (Cooper Andrews) assist a now-teenage Henry (Matt Lintz) as he attempts to fix a burst pipe. Henry is upset because things keep breaking down in the Kingdom and no one knows enough about the maintenance to stop it, and lets Ezekiel (Khary Payton) know exactly how he feels. Henry wants to apprentice under Hilltop’s blacksmith to be more useful, but Ezekiel doesn’t want to let the boy go. Carol advises the king that Henry is grown up and will need to find his own way eventually. Through their conversation we also learn that relations between the communities have been fractured since Rick’s death.

Ezekiel eventually agrees to Henry’s apprenticeship, so Henry and Carol prepare a wagon and leave the Kingdom for Hilltop. Ezekiel tells Henry to “Be respectful. Be responsible. Be kind and be safe.”

Judith leads the new group back to Alexandria, where the group surrenders their weapons. Michonne is angry they have been brought back, but agrees to let them stand before Alexandria’s ruling council to decide their fate.

Before the council, we learn that Magna was a waitress before the apocalypse, while Luke was a music teacher. Connie, who is deaf, was a journalist and Kelly, her sister, was a high school student who know serves as the sign language interpreter for Connie. Michonne lays into Magna, correctly deducing that Magna formerly did time in prison. She also forces Magna to surrender a knife hidden as part of her belt buckle, something Magna did not mention when she was told to surrender her weapons.

Out on the road, Carol teases Henry by telling him they will be taking a detour before Hilltop. Henry hears a woman screaming and rushes in to help, only to be ambushed by Jed (Rhys Coiro) and a ragtag group of Saviors. They steal everything from Carol and Henry’s wagon, but Jed is willing to let them live since she once spared him. But before he does, he demands Carol’s wedding ring. Henry can’t take it anymore and attacks Jed, but is quickly overwhelmed. Carol shields him and gives up the ring.

Eugene (Josh McDermitt) and Rosita (Christian Serratos) travel far from Alexandria to set up a new piece of radio equipment to boost the chances of discovering more survivors. Rosita is doing so at the behest of Gabriel (Seth Gilliam), with whom she now has a relationship. They arrive at a water tower, which Eugene climbs to place the equipment. Suddenly, a herd of walkers appears.. Eugene races down the ladder, but is forced to jump and badly hurts his leg. Rosita has him use a shovel as a crutch and they make their escape.

At Alexandria, Judith sits outside the window of Negan’s cell as she works on math homework with his help. She asks his thoughts about the group she brought, and he tells her of how he used to bring home stray dogs as a child until one attacked the other dogs and Negan’s mother.

Carol and Henry camp out for the night, with Henry chastising Carol for handing over the ring. She says she did it to protect him, but he is not satisfied with that and goes to sleep. Later that night, Carol sneaks out and finds the Saviors as they sleep. She covertly covers them with gasoline and lights a match. Jed wakes up and promises to go and never come back, just before Carol drops the match and burns them all alive. The next morning, Carol and Henry ride into the woods, where they encounter Daryl.

Siddiq (Avi Nash) tends to Yumiko, whom he says will be ready to move by the next day. That night, the new group discusses their options. The others are mad Magna hid the knife, and now confront her because they saw her swipe Yumiko’s necklace, which also contains a hidden blade. Magna wants to fight Michonne for their place in the community, but the others are against her.

Magna sneaks out with Yumiko’s necklace and heads to Michonne’s house. But when she looks through the window and sees Michonne with her and Rick’s young son, she has a change of heart. She knocks on the door and surrenders the blade to Michonne. Judith watches it all from the top of the stairs.

The next day, the new group prepares to depart. Michonne arrives and says they cannot stay in Alexandria, but she will lead them to Hilltop.

The episode ends with Eugene and Rosita hiding from the herd. They slide down a mud embankment and hide. As they do, they can hear raspy voices whispering from within the herd, “Where are they? and “They must be close. Don’t let them get away.”